On the Ball: The Ashes is a rivalry like no other 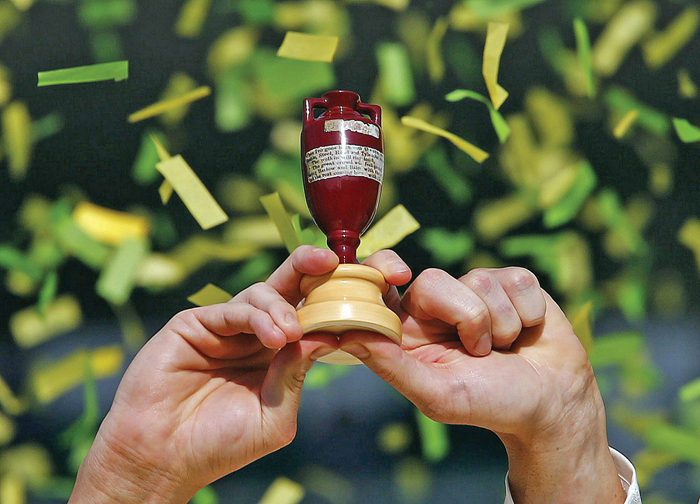 The trophy may be tiny, the prize, modest, but the legacy that accompanies the team that wins the Ashes surpasses any tangible reward that either England or Australia could fathom. The 2017 Ashes series begins in Brisbane on Thursday morning, and there is plenty to play for: whosoever lifts the sacred urn on the 8th of January next year will do so knowing that their country is the one leading the other in history of this great competition.
Of the 69 Ashes series played so far, both the English and the Australians have won 32 apiece. Another five have been drawn, and the Aussies, in their typically firebrand style, have not held back from verbally intimidating the opposition.
Australia decimated their long-time rivals and colonial masters 5-0 the last time the English travelled Down Under, with fast bowler Mitchell Johnson plundering 37 wickets during that 2013-14 series. Amidst that mauling, Graeme Swann decided to retire, and in its wake, batsman Kevin Pietersen was discarded by the England setup, while his team mates Matt Prior and Jonathan Trott seldom played afterwards.
Johnson may no longer be part of that fearsome Australian pace setup, which once boasted speed demons such as Glenn McGrath, Brett Lee and Jason Gillespie, or wily operators such as Shane Warne, but they do have in their arsenal Josh Hazlewood, who had some choice words for the visitors.
“We have guys who played in that series who will remind England what happened,” he threatened.
Hazlewood is likely to be part of a bowling foursome which features Mitchell Starc, Pat Cummins and Nathan Lyon, seamers who are to be feared in their own right. Lyon’s comments make Hazlewood’s seem gentle in comparison: He hopes to ‘end the careers’ of a few Englishmen.
England’s latest sojourn to the Gabba – the home of the first Test – is going to be as far from friendly as is possible. Many members of this squad would’ve chillingly been told what happened the last time England stepped onto the pitch of this hallowed Brisbane stadium: Australia beat Nasser Hussain’s men by a whopping 381 runs, and their rampant form showed no signs of faltering as the five-Test series wore on.
England had come into the series as favourites, having won the previous Ashes 3-2 at home, and were facing an Aussie side who’d lost seven of their last nine Tests. But when a tournament as prestigious and all-consuming as the Ashes rolls around, the stakes are just that little bit higher, and the form book is unceremoniously flung out the window. That was the series that brought Australia back to the fore of world cricket, and they will be keen to inflict as much damage on the English right from the start – a good first impression, after all, does make wonders.
Australia – masters of the mental mind game – will be sure to bring up the 14 consecutive years during which they lorded over the Ashes, winning the trophy not just at home, but overseas as well, against the creators of the gentleman’s sport of cricket: The Aussies were thoroughly dominant from 1989 to 2003, and it was only when England regained the Ashes in 2005 that they were able to bring some respectability back to their recent legacy in this competition.
England veteran Alistair Cook, though, is having none of the brutal banter that is being hurled his team’s way, instead choosing to quickly draw attention away from Johnson’s shattering of the previous Ashes team that travelled.
“Mitch bowled outstandingly in that series, one of the best periods of bowling I’ve ever faced, backed up by Ryan Harris, Peter Siddle, but they’re no longer playing,” Cook told reporters on Tuesday. “So in one sense it’s a bit irrelevant. It happened four years ago and it’s all what happens on Thursday rather than looking back. England have won four of the last five Ashes series, so you can look at what you want.
Cook – in typically British fashion – chose to laugh in the face of the opposition (specifically Nathan Lyon) in this case.
“I had a really nice 10-minute chat with Nathan,” he said. “He was the first person I saw when I got to the ground, asking how my kids were. It just makes me chuckle, I suppose, it makes everyone chuckle. It is what it is. All the talking stops very quickly and the series becomes a normal series after the first two hours.”
“There’s nothing we haven’t seen before in cricket,” said the 32-year-old. “They’re not suddenly bowling 150 miles an hour. (They’ve) not got magic balls which start way outside the stumps and swing miles and stuff.” Few cricket series – nay, few sporting events – conjure up the romance, aggression and passion of the Ashes. And as England once again step into the ‘Gabbatoir’ on Thursday morning, ready to exorcise the demons of their past, one thing is painfully clear: Few ever will.
—[email protected]

Where: The Gabba, Brisbane, Queensland, Australia