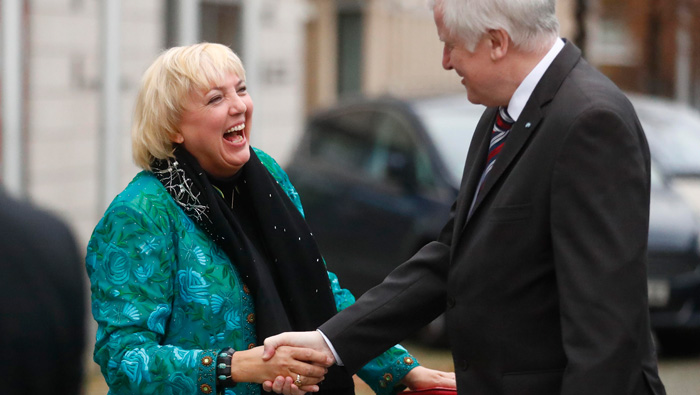 Berlin: Germany's would-be coalition partners met on Saturday for a last-ditch round of weekend talks aimed at finding common ground in the divisive fields of climate and migration policy, in the hope of staving off a possible early election.
For German Chancellor Angela Merkel, an awkward three-way conservative-liberal-Green alliance is her best hope of securing a fourth term, but the parties are still far apart after four weeks of talks.
The biggest sticking points are over climate change, where the Greens want emissions cuts that the other parties see as economically ruinous, and immigration, where Merkel's arch-conservative allies in Bavaria insist on stricter rules.
"The next two days are going to be decisive," said Volker Kauder, parliamentary leader of Merkel's conservative Christian Democratic Union (CDU) as he arrived for the talks.
A self-imposed deadline of Thursday for wrapping up exploratory talks and starting formal coalition negotiations passed without agreement, forcing the conservatives to promise further concessions on emissions cuts to the Greens.
Bavaria's Christian Social Union (CSU) fears that it risks being toppled by the far-right in regional elections next year after 60 years in power if it fails to secure immigration red lines that are anathema to the left-leaning Greens.
"We'll have a sense this evening of whether it's going to work," CSU leader Horst Seehofer said. Among its demands are a cap of 200,000 per year on the number of refugees Germany will take, and an end to the practice of allowing successful asylum seekers to bring their immediate families to join them.
Germany's President Frank-Walter Steinmeier, a former foreign minister who now plays an apolitical role, warned against "fresh election panic", suggesting in a newspaper interview that the brinkmanship was not out of the ordinary.
"Before they get going there are always attempts by parties to drive prices up as high as possible," he told Welt am Sonntag.
"What we've seen in the past weeks isn't so different from previous negotiations." All parties are anxious to avoid a repeat election, which they fear could boost the far-right Alternative for Germany (AfD) party, which surged into parliament for the first time in September's national election. But the heterogeneous three-way coalition, made necessary after the conservatives and the centre-left suffered punishing election losses, is almost without precedent in Germany's post-war history.
The "Jamaica" tie-up, so-called because the three camps' colours match the island nation's flag, is untested at national level.