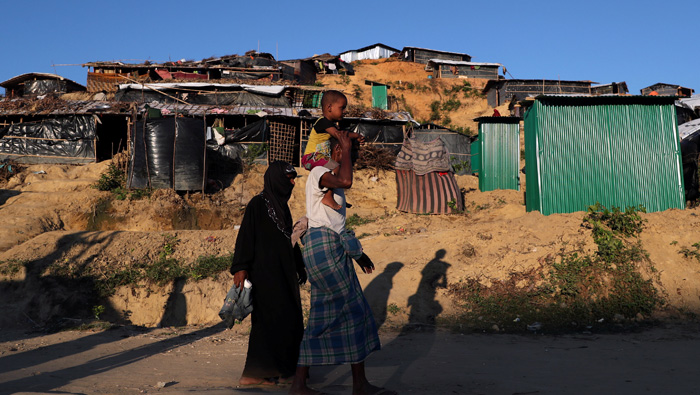 Dhaka: Chinese Foreign Minister Wang Yi on Saturday urged Bangladesh and Myanmar resolve the Rohingya crisis through bilateral negotiations instead of an international initiative.
"The international community should not complicate the situation," Wang said in a press briefing at the Chinese Embassy in Dhaka. "Actions in the United Nations Security Council must help Bangladesh-Myanmar bilateral cooperation to resolve the problem peacefully", the minister told reporters.
Wang arrived in Bangladesh on Saturday for a two-day visit and from there he will go to Myanmar to attend the Asia-Europe Meeting(ASEM). "China supports resolving the crisis peacefully, bilaterally with mutual consultation between Bangladesh and Myanmar," he said.
More than 600,000 Rohingya have fled to Bangladesh since late August driven out by a military clearance operation in Buddhist majority Myanmar's Rakhine State.
"It is a complex situation and needs a comprehensive solution. Economic development of Rakhine State is needed. China is ready to help," Wang said.
Bangladesh’s Foreign Minister Abul Hassan Mahmood Ali told Wang that Bangladesh is trying to resolve the issue both bilaterally and internationally as it could not afford the huge burden of the refugees.
A statement from Bangladesh foreign ministry said that when the issue of displaced Myanmar nationals was raised, Wang stated that China would help resolve the issue and will not be partial to any side. He acknowledged that Bangladesh is facing the brunt of continuing influx of Rohingya refugees, the Bangladeshi foreign ministry statement said.
Foreign Minister Mahmood Ali said that Bangladesh remains engaged bilaterally with Myanmar to solve the problem and will look forward to China's support for the early return of the Rohingyas to Myanmar with dignity and safety.
A delegation of U.S. Congressmen is visiting Bangladesh to study the Rohingya crisis on Saturday. Sweden's foreign minister Margot Wallstrom, EU High Representative for Foreign Affairs and Security Policy Federica Mogherini, Germany's foreign minister Sigmar Gabriel and Japanese Foreign Minister Taro Kona will also visit Bangladesh this week.