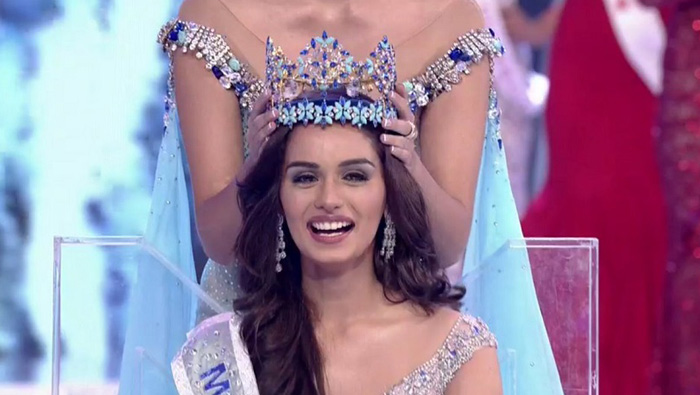 Beijing: India's Manushi Chhillar on Saturday won the coveted Miss World 2017 crown at a grand event in China, bringing to an end the country's dry spell of 17 years at the top pageant contest.
The 20-year-old from Haryana, who is a medical student, edged out top five contestants from England, France, Kenya and Mexico.
Chhillar was presented the crown by Stephanie Del Valle, the last year's Miss World winner from Puerto Rico at the event in Sanya City Arena in China which was televised live globally.
The announcement about Chhillar winning the Miss World crown was also made on the pageant's official Twitter handle as well as on its Facebook page.
"The winner of Miss World 2017 is Miss India Manushi Chhillar," the tweet said. The first and the second runners-up were Miss England Stephanie Hill and Miss Mexico Andrea Meza.
In the top five round, Chhillar was asked which profession according to her deserved the highest salary.
"I think a mother deserves the highest respect and when you talk about salary it's not always about cash but I feel it's the love and respect that you give to someone. My mother has always been the biggest inspiration in my life. All mothers sacrifice so much for their kids. So, I think it is the job of a mother that deserves the highest salary," Chhillar said to a wide-applause.
Chhillar is the sixth Indian to win the coveted crown, which was first won by Reita Faria back in 1966.
Aishwarya Rai had bagged the title in 1994, followed by Diana Haydon in 1997, Yukta Mookhey in 1999 and Priyanka Chopra in 2000, the last for India.
According to Chhillar's profile on the Miss World website, she aims to be a cardiac surgeon and wants to open a chain of non-profitable hospitals based in rural areas.
A trained Indian classical dancer, Chhillar has a passion for outdoor sports and actively participates in paragliding, bungee jumping, snorkelling and scuba diving besides sketching and painting.
Her personal motto, as described on the website, reads: "When you cease to dream you cease to live" and "Courage to give flight to your dreams and the ability to believe in yourself makes life worth living".