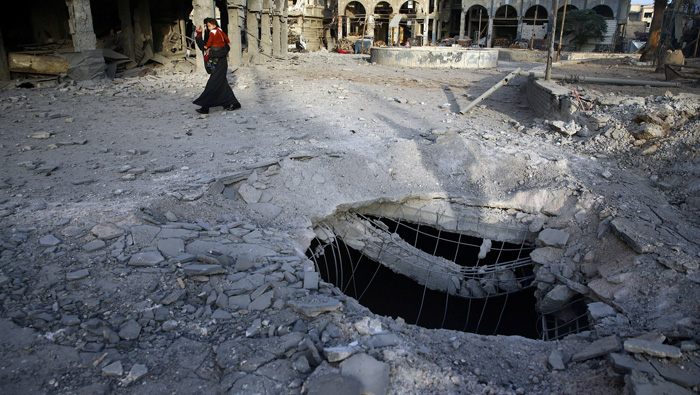 Amman: The Syrian army backed by Russian jets on Wednesday stepped up shelling and air strikes on a besieged rebel-held enclave in Damascus a day after rebels stormed an army base in the area, rebels, a war monitor and residents said.
The bombardment follows a surprise ground offensive by rebels on Tuesday on an army complex in the heart of the city's Eastern Ghouta region that has defied opposition assaults since the start of the conflict.
The fortress-like Military Vehicles Administration in the government-held part of Harasta town has long been used to strike at the densely populated Eastern Ghouta, where over 300,000 people live under siege.
Rebels have failed in repeated offensives to seize the sprawling compound, from where surface-to-surface rockets are launched against the rebel enclave.
Douma, the main city in opposition-held Eastern Ghouta, is only three km away. "The fighting is continuing and the shelling and air strikes are heavy near the base and most of the towns of the Ghouta," said Abu Kutaiba, a military commander for Ahrar al Sham, a rebel group that has spearheaded the attack.
A Syrian military source said on state media the army had repelled "terrorists who sought to infiltrate in large numbers," killing tens and destroying their weaponry. It did not mention the heavy aerial strikes on opposition areas.
Backed by Russian strikes, government forces have escalated military operations against Eastern Ghouta in recent weeks, seeking to tighten a siege on the area, residents and rebels say. The rebel assault aims partly to relieve that pressure.
The Eastern Ghouta is part of several de-escalation zones which Russia has brokered with rebels across Syria that has freed the army to redeploy in areas they can regain ground.
The rebel offensive which began on Tuesday is the first since last March when mainstream Free Syrian Army (FSA) rebels staged an attack against government-held areas in northeastern Damascus.
The rebels were forced to retreat after initial gains. In retaliatory attacks, aerial strikes and shelling hit Harasta, Irbin, Misraba, Hamouriya, and Saqba towns in Eastern Ghouta with at least eight civilians killed and about 94 wounded in the last 20 hours alone, according to the Syrian Observatory for Human Rights and residents.
After securing the last rebel pocket inside the capital's Qaboun district last May, the Syrian army has since concentrated its military drive against Ain Terma and Jobar, northeast of the capital in the Ghouta area.
Rebels helped by an elaborate network of underground tunnels have repelled repeated attempts to storm these areas.
"The army and its militias have failed to make any progress and have had heavy losses," said Alwan, a spokesman for the FSA's Failaq al Rahman rebel group.
Backed by Russian strikes, the army has however gradually succeeded in the last year in shrinking rebel held control over Eastern Ghouta. The loss of agricultural land has compounded the humanitarian plight of civilians. The United Nations has warned of impending starvation if aid does not reach the area, where international deliveries have long been erratic and obstructed.