Against the clock, German parties haggle over immigration, euro budget 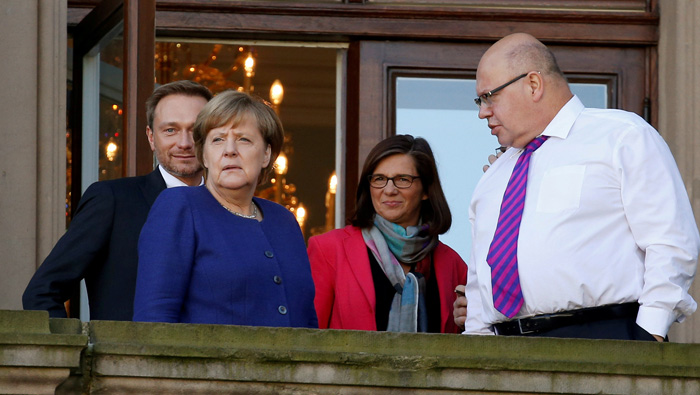 Berlin: With just one day left to conclude exploratory talks on forming a new coalition government, German parties were still far apart on Wednesday on the hot issue of immigration and the future governance of the euro zone.
Merkel, 63, wants the exploratory talks to end on Thursday, when German media expect her to press all sides to strike a compromise before moving to formal negotiations that could lead to her securing a fourth term as Chancellor.
Merkel is hoping to put together an unlikely alliance of her conservatives, the pro-business Free Democrats (FDP) and the ecologist Greens - a combination untested at national level but a deal which could head off fresh elections.
The parties are struggling to reach agreement on the touchy issue of immigration, with the Greens firmly opposed to a conservative plan to cap at 200,000 per year the number of migrants Germany will accept for humanitarian reasons. The parties are also at odds over the number of foreigners who qualify to join relatives granted asylum in Germany.
Differences over whether Germany should back a French proposal to create a joint euro zone budget also highlight the difficulties Merkel faces in trying to forge the awkward alliance.
A document seen by Reuters, describing a possible government's stance on European issues, contains bracketed sentences reflecting areas of disagreement that must be settled by party leaders on Wednesday. ""[The following compromise proposal could not be reached: There is a need for a capacity to buffer extraordinary, unpredictable economic emergency situations which are beyond the control of individual member states...]," one passage reads.
Another sentence, described as the FDP position read: "We do not support a fiscal capacity in order to buffer the effects of economic shocks." The paper contains two alternate phrasings on the banking union, one supported by Merkel's conservatives and the left-leaning Greens, and another with more hardline language backed by the pro-business FDP.
Merkel needs a deal to head off fresh elections that mainstream politicians fear could see the far-right Alternative for Germany (AfD) make further gains after it surged into parliament for the first time after a September election.
Businesses are eager for the parties to reach a deal. "We believe that all parties involved have understood the urgency to reach an agreement by Christmas," said Dieter Kempf, chief of Germany's largest industry association, the BDI, warning that prolonged uncertainty could hit investment. The mood music coming out of the talks has been mixed.
Late on Tuesday, Merkel and other senior conservatives drank beverages with Greens co-leader Katrin Goering-Eckardt, conservative party sources said. But the coalition negotiations are complicated by the dynamics within the conservative bloc, which comprises Merkel's Christian Democratic Union (CDU) and their Bavarian sister party, the Christian Social Union (CSU).
The CSU, worried about losing support in a state election next year, is uncompromising on immigration - a risk for the three-way 'Jamaica' coalition, so-called because the parties' colours match those of the Caribbean country's flag.
CSU Secretary General Andreas Scheuer said his party was ready to compromise, but added: "It is becoming ever more clear that Jamaica is not a pleasure trip."