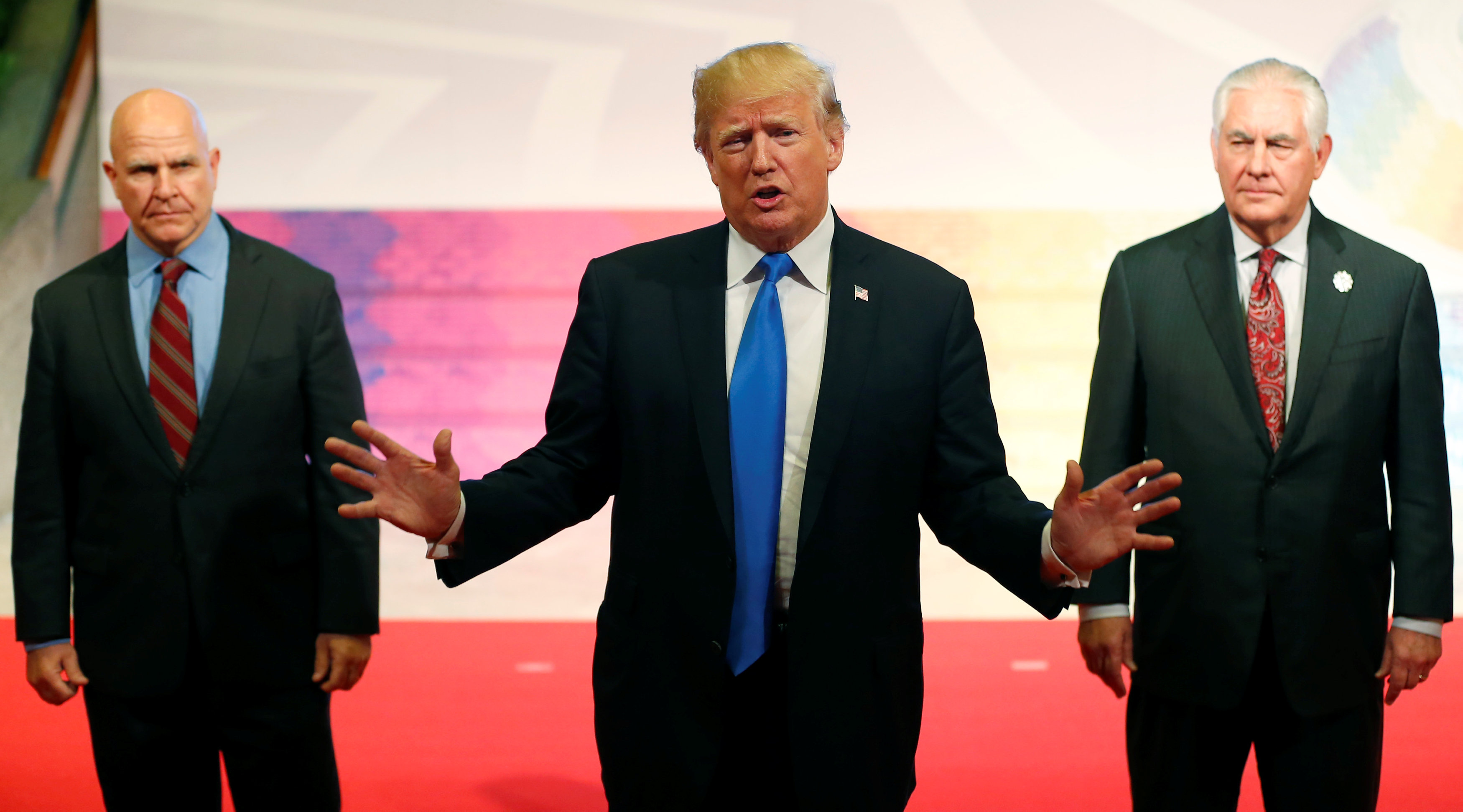 Manila: U.S. President Donald Trump skipped the plenary session of a summit of East and Southeast Asian leaders in Manila on Tuesday because of scheduling delays, but he said his marathon trip to the region had been a success.
Trump left for home from the Philippines after a lunch with the other leaders, as meetings were running about two hours behind schedule.
He told reporters on Air Force One that he had delivered his prepared remarks during the lunch instead of the summit meeting. Secretary of State Rex Tillerson would attend the plenary session in his place, a senior White House official said.
Trump said his trip had resulted in at least $300 billion, possibly triple that figure, of deals being agreed. He did not elaborate.
"We've explained that the United States is open for trade but we want reciprocal, we want fair trade for the United States," he said.
Trade and concern about possible protectionism under Trump's "America First" agenda have come up during his visit to the region, which included stops in Japan, South Korea, China, Vietnam before concluding in the Philippines.
Earlier in the day, Canadian Prime Minister Justin Trudeau raised the plight of Rohingya refugees and extra-judicial killings in the Philippines at the summit, sensitive human rights issues skirted by almost all the others.
There was no pressure from Trump over the Philippines' bloody war on drugs during a meeting on Monday with President Rodrigo Duterte on the sidelines of the summit.
A joint statement after the meeting said the two sides "underscored that human rights and the dignity of human life are essential, and agreed to continue mainstreaming the human rights agenda in their national programmes."
However, Trudeau said that during his conversation with Duterte, he "mentioned human rights, rule of law and specifically extra-judicial killings as being an issue that Canada is concerned with."
"The president was receptive to my comments and it was throughout a very cordial and positive exchange," Trudeau told a news conference.
More than 3,900 pushers and users have been killed in the war on drugs that Duterte declared when he took office last year. His government says the police act in self-defence, but critics say executions are taking place with no accountability.
Duterte cursed Trump's predecessor, Barack Obama, last year for raising concerns about the war on drugs and he subsequently declared that he was breaking with the United States, a close ally of the Philippines since World War II. Trump, by contrast, said on Monday he had a "great relationship" with Duterte.
Trudeau said he also met Myanmar leader Aung San Suu Kyi and raised the plight of Rohingya refugees, although he did not mention the Muslim minority by name.
"This is a tremendous concern to Canada and to many, many countries around the world," he said.
The government in mostly-Buddhist Myanmar regards the Rohingya as illegal immigrants from Bangladesh and does not recognise the term.
Over 600,000 Rohingya have fled to refugee camps in Bangladesh since military clearance operations were launched in response to attacks by Rohingya militants on August 25.
The plight of the Rohingya has brought outrage from around the world and there have been calls for democracy champion Suu Kyi to be stripped of the Nobel peace prize she won in 1991 because she has not condemned the military's actions.
Some countries in the 10-member Association of Southeast Asian Nations (ASEAN), particularly Muslim-majority Malaysia, have voiced strong concern over the issue recently.
However, in keeping with ASEAN's principle of non-interference in each others' internal affairs, it appeared to have been put aside at the summit, which brought Southeast Asian nations together with the United States, Japan, China, India, Australia and Canada.