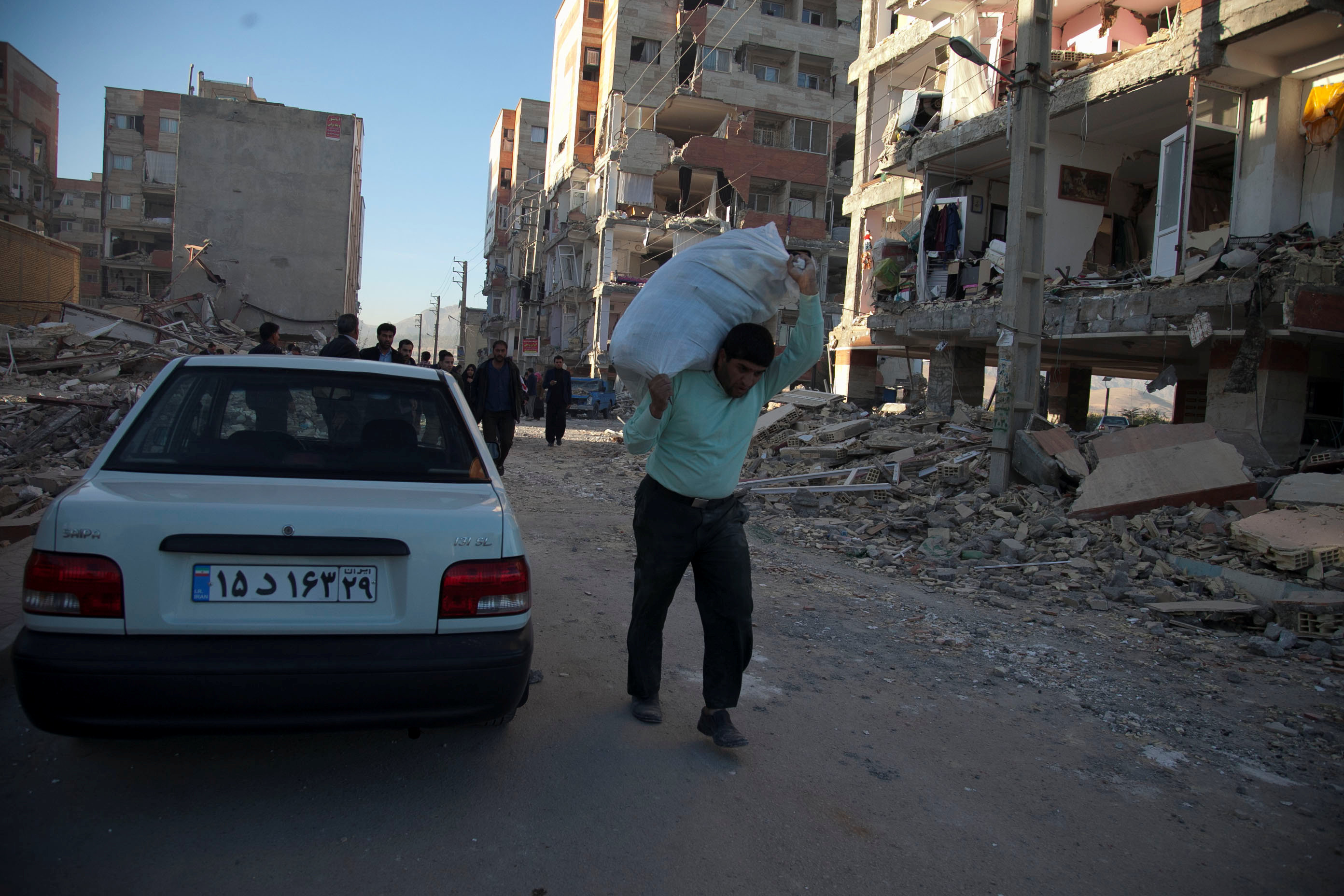 Ankara: Iranian officials called off rescue operations, saying there was little chance of finding more survivors from the earthquake that shook parts of western Iran on Sunday, killing at least 530 people, state media said on Tuesday.
Survivors, many left homeless by the 7.3 magnitude earthquake that struck villages and towns in a mountainous area bordering Iraq, battled overnight temperatures just above freezing and faced another bleak day on Tuesday in need of food and water.
The death toll of 530, reported by state news agency IRNA, made it Iran’s deadliest earthquake in more than a decade. Thousands of people were injured and 30,000 homes damaged. Two whole villages were destroyed.
The quake struck on the Iran-Iraq border, causing most of its damage in Iran despite an epicentre on the Iraq side of the frontier. Iraqi officials said seven people were killed and 325 injured in Iraq, all in the northern Kurdish provinces.
Iran's President Hassan Rouhani arrived in the morning in the stricken area in Kermanshah province and promised that the government would "use all its power to resolve the problems in the shortest time".
Thousands of people huddled in makeshift camps while many others chose to spend a second night in the open, despite low temperatures, because they feared more tremors after some 193 aftershocks, state television said.
A homeless young woman in Sarpol-e Zahab, one of the hardest-hit towns, told state TV that her family was exposed to the night cold because of lack of tents.
"We need help. We need everything. The authorities should speed up their help," she said.
Television showed rescue workers combing through the rubble of dozens of villages immediately after the quake. But by Tuesday morning Iranian officials said there was no longer any likelihood of finding survivors and called the rescue off.
"The rescue operations in Kermanshah province have ended," Pir-Hossein Kolivand, head of Iran's Emergency Medical Services, said.
Iran's top authority, Supreme Leader Ayatollah Ali Khamenei, offered his condolences on Monday to the victims and called on government agencies to do all they could to help.
The Iranian army, the elite Revolutionary Guards and forces of its affiliated Basij militia were dispatched to affected areas on Sunday night.
Hospitals in nearby provinces took in many of the injured, state television said, airing footage of survivors waiting to be treated. Hundreds of critically injured were dispatched to hospitals in Tehran.
Iran's Red Crescent said emergency shelter had been provided for thousands of homeless people, but a lack of water and electricity as well as blocked roads in some areas hindered aid supply efforts.
"People in some villages are still in dire need of food, water and shelter," said the governor of Qasr-e Shirin county in Kermanshah province, Faramarz Akbari.
The mayor of Ezgeleh, a city in Kermanshah, said 80 per cent of its buildings had collapsed. Survivors desperately needed tents with elderly people and babies as young as one-year-old sleeping in the cold for two straight nights.
In an interview with state television, Nazar Barani asked people to send fuel, milk, water and food as emergency services were too slow and providing limited provisions.
"People are hungry and thirsty," a local man told ISNA news agency. "There is no electricity. Last night I cried when I saw children with no food or shelter."
Houses in Iranian villages are often made of concrete blocks or mudbrick that can crumble and collapse in a strong quake. Some people are angry that among the collapsed buildings were homes that the government has built in recent years under an affordable housing programme.
Photographs posted on Iranian news websites showed rescue workers digging people out of collapsed buildings, cars smashed beneath rubble and rescue dogs trying to find signs of life under the twisted ruins.
"More people will die because of cold. My family lives in a village near Sarpol-e Zahab. I cannot even go there. I don't know whether they are dead or alive," Rojan Meshkat, 38, in the Kurdish city of Sanandaj told Reuters by telephone.
Iran is crisscrossed by major fault lines and has suffered several devastating earthquakes in recent years, including a 6.6 magnitude quake in 2003 that reduced the historic southeastern city of Bam to dust and killed some 31,000 people.