Weaker than ever, May faces test in UK parliament over Brexit plans 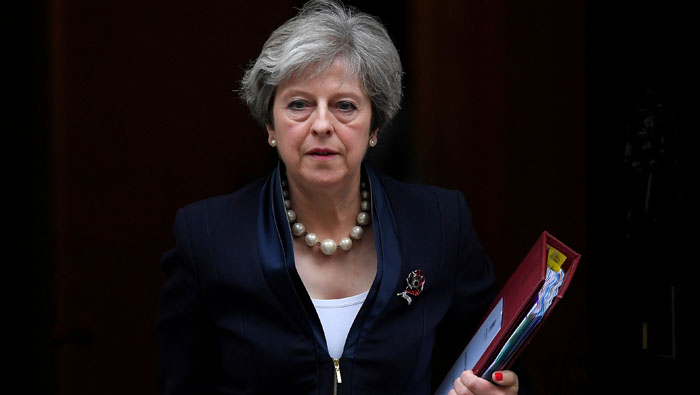 London: Prime Minister Theresa May's blueprint for Britain's exit from the European Union faces a crucial test starting on Tuesday, when lawmakers try to win concessions from a weakened leader on the government's legislation to sever ties.
It is yet another battle for May after scandals and gaffes that have brought questions about her leadership into the open. As many as 40 of her lawmakers would support a no-confidence motion against her, according to the Sunday Times newspaper.
But many sources in her governing Conservative Party say now is not the time to force her out because despite backing Britain remaining in the EU, even if reluctantly, they think she is still the best option to deliver Brexit.
That makes the debates over EU withdrawal bill all the more important as a test of her ability to steer through legislation she says is crucial to give companies confidence that the rules will not change when Britain leaves in March 2019.
With the power balanced in favour of lawmakers rather than the government after the Conservatives lost their majority in a June election, many - even within the party - will use the debate over coming weeks to put the pressure on.
"We have no intention of parliament being a bystander, we are a key participant in this process," said Hilary Benn, a lawmaker from the opposition Labour Party who is chair of the Brexit parliamentary committee.
"In the end we are going to have to vote on the final deal, and the outcome of the election and the balance of votes in the House of Commons now really does bring that home," he told the Institute for Government thinktank earlier this month.
The public debate in parliament on Tuesday is the first of eight to discuss the bill before it goes on to other legislative stages. The schedule will be determined by the House of Commons over the course of the debates.
Lawmakers have proposed 186 pages of amendments to the bill, which largely 'copy and paste' EU rules and regulations into British law but also, critics say, hand the government wide-ranging powers and cut parliament out of some Brexit planning.
The bill is separate from negotiations going on in Brussels, but the EU will want to see how many and which amendments are passed and will regard the showdown as a test of May's strength at home.
May is under pressure to make progress with the EU at a summit in December after growing European frustration over Britain's refusal to say how much it thinks it should pay to leave.
The amendments include one to stop the government from adopting the so-called Henry VIII powers, named after the 16th century monarch who ruled by proclamation, which allow the government to amend laws being transposed from EU law.
Other amendments address criticism that parliament will not get a "meaningful vote" on the deal eventually agreed with the EU, and press the government to enshrine in law the EU protections Britons now enjoy such as workers rights and environmental protections.
May's government has taken some of the fire out of the proposed challenges by signalling it is willing to bend on the Henry VIII powers, and on Monday, her Brexit minister David Davis said parliament would be offered a new vote on the final Brexit deal. The first debate will cover the part of the bill that repeals the 1972 European Communities Act on the retention, conversion and interpretation of existing EU laws, and EU rights.
"Getting parliamentary scrutiny is a winner. The government will change position because it doesn't want a defeat," said one Conservative lawmaker, speaking on condition of anonymity. But other issues, such as the push for a vote in parliament on the EU deal which could force the government back to the negotiating table, or even possibly overturn Brexit, present huge challenges.
The debate comes at a new low point for May since she was made prime minister after Britain voted for Brexit last June. She has lost two ministers in a week, and her foreign minister, Boris Johnson, is under pressure from the opposition to resign over comments about a jailed aid worker in Iran, a case further complicated at the weekend by Gove, his ally.
On Monday, Keir Starmer, the Brexit spokesman for the Labour Party, launched a new bid to derail the withdrawal legislation, saying May's policy to end the jurisdiction of the EU court - the European Court of Justice - was incompatible with her own policy for a smooth transition after Brexit.
"Over recent weeks, it has become increasingly clear that you alone do not have the authority to deliver a transitional deal with Europe and to take the necessary steps to protect jobs and the economy," he wrote in an open letter to May.