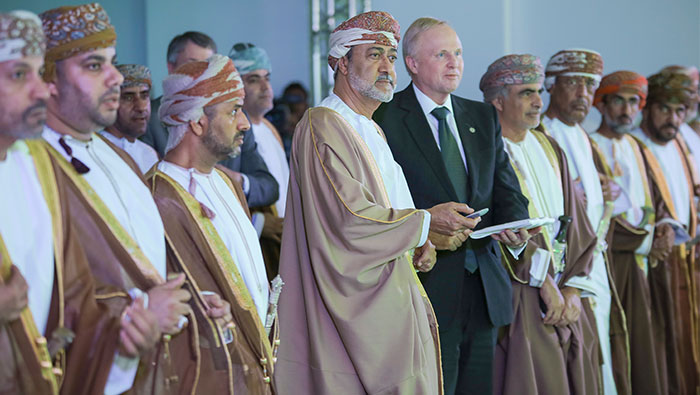 Khazzan Field: The first phase of Oman’s giant Khazzan gas field was officially inaugurated under the patronage of His Highness Sayyid Haitham bin Tariq Al Said on Thursday.
Earlier at a function, Dr. Mohammed Al Rumhy, Minister of Oil and Gas, stated: “I am delighted to see BP delivering Phase One of the Khazzan Project ahead of time and under budget. This will result in realising more gas reserves and more production of gas that our country needs to support our energy planning and requirements.”
The Phase One development started gas production in September 2017, ten years after the signing of BP’s production sharing contract with Oman and almost four years after the development was approved.
Eng. Isam bin Saud Al Zidjali, CEO of Oman Oil Company, commented: “As an investment arm of the Sultanate in the energy sectors; we in Oman Oil are honoured to be part of the Khazzan Project and help maximise the value of Oman’s natural resources. I am delighted by the fact that the project has contributed to the sustainable development of the nation on many fronts, including human capital development, new technology applications, and social responsibility, to name only a few.”
BP expects to start-up seven upstream major projects in 2017 -- making it one of the most important years for commissioning new projects in BP’s history. These seven projects are expected to make a significant contribution to the 800,000 barrels of oil equivalent per day of production from new projects that BP expects to add by 2020.
Phase One of the Khazzan development will include a total of 200 wells feeding into a two-train central processing facility. At peak, the Phase One development involved a workforce of around 13,500. Phase One production is expected to plateau at 1 billion cubic feet of gas per day (bcf/d).
When the second phase of development of the Khazzan field - known as Ghazeer - is fully on stream total production is expected rise to 1.5 bcf/d. In total, approximately 300 wells are expected to be drilled over the estimated lifetime of these two phases of development of the Khazzan field.
The Khazzan tight gas reserves lie at depths of up to five kilometres in narrow bands of extremely hard, dense rock.
These complex and challenging conditions require specialised drilling equipment, the precise drilling of both vertical and horizontal wells, and well stimulation to free the gas.
Drilling efficiency has increased significantly during the development of the project. The average time to drill and complete a vertical well was reduced by 27 per cent and a record time of 60 days was achieved for completion of one well.
While BP provided advanced seismic, hydraulic fracturing and well design expertise, many local Omani businesses contributed to the Khazzan Project. In fact, approximately 38 per cent of the total contract spend to date has been awarded to local oil and gas services companies.