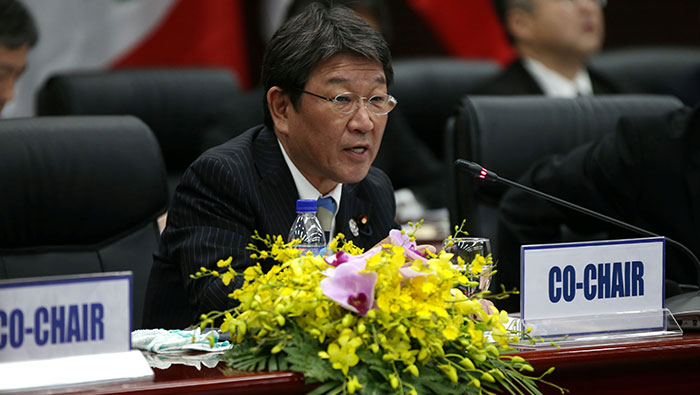 Danang, Vietnam: Talks on pushing ahead the Trans Pacific Partnership (TPP) trade deal without the United States reached a critical point on Thursday as ministers from the 11 countries discussed a proposed agreement in principle.
Talks on the TPP, ditched by U.S. President Donald Trump in one of his first acts in office, have been held on the sidelines of Asia Pacific Economic Cooperation (APEC) meetings in the Vietnamese resort of Danang.
Clear agreement on proceeding without the United States would be a boost for the principle of multilateral free trade pacts over the bilateral deal-making that Trump favours.
But while Japan has been lobbying hard for a quick agreement to move ahead, Canada, New Zealand and Malaysia are among countries that have appeared less enthusiastic to hurry.
"We have collectively reached the stage where we can discuss a proposal for a final package for an agreement in principle of the TPP," Japanese Economy Minister Toshimitsu Motegi told ministers from the other countries.
"I would like to emphasise once again the importance of reaching an agreement in principle right here."
Motegi said negotiators had tried to reach a conclusion satisfactory to all, "or put in a different way, a conclusion that makes everybody equally unhappy".
The TPP aims to eliminate tariffs on industrial and farm products across a bloc whose trade totalled $356 billion last year. It also has provisions for protecting everything from labour rights to the environment to intellectual property — one of the main sticking points.
Break in talks
As ministers left a first meeting on Thursday, they said more discussions were needed. An official said they were expected to meet again in the evening ahead of talks between TPP leaders on Friday.
"We've got more work to do, but we are inching closer to an agreement so I remain very hopeful," Australian Trade Minister Steven Ciobo told reporters. Mexican Economy Minister Ildefonso Guajardo said talks were "very productive". Vietnam said some new issues had cropped up that needed further discussion.
Mexico's position, like that of Canada, is complicated by the fact that it is also renegotiating the North American Free Trade Agreement (NAFTA) with the Trump administration.
Canada, whose economy is the second biggest among the TPP-11 after Japan, said on Wednesday it would not be rushed into a revived TPP deal.
Among options being discussed by TPP countries is whether to suspend some provisions of the original agreement to avoid having to renegotiate it and potentially to entice the United States back in the long term, officials said.
"The negotiation is proceeding but it has not yet been finalised," New Zealand Trade Minister David Parker told Reuters. "There are many countries that want to achieve finality this week, but it's not yet clear whether consensus can be achieved."
Parker added that the 11 countries were discussing suspension of certain provisions of TPP in order to proceed with the trade deal, but no agreement had been reached.
"One of the ambitions of some of the TPP countries is to leave open the possibility that the United States could join later if they wanted to and some of the terms are being constructed in a way that assists that rather than hinders that," Parker said.
Trump and other APEC leaders, including President Xi Jinping of China and Russian President Vladimir Putin, will meet on Friday in Danang.
APEC ministers ended their meeting on Thursday with a "very good outcome", despite differing views on trade and protectionism, Vietnamese Trade Minister Tran Tuan Anh said.
The ministerial talks on a communique for leaders were extended into a second day on Thursday in the face of U.S. demands for changes to the language used concerning issues such as free trade and protectionism, officials at the talks said.