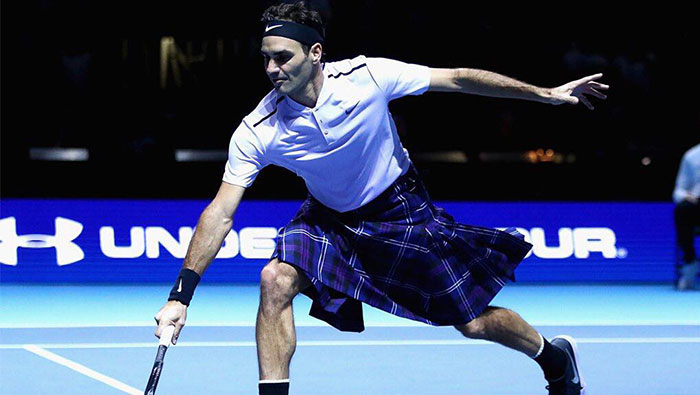 Glasgow: While it’s always great to see tennis legend Roger Federer collaborating with his counterpart Andy Murray for a good cause, fans who tuned in to watch the two players face-off in Glasgow were treated to a sight they’d never witnessed before.
The Swiss great turned out for the match in a kilt – a traditional Scottish skirt that is worn by men – as he beat Murray 6-3, 3-6, 10-6.
Federer flew in to Glasgow to take part in Andy Murray Live, an initiative by the Scotsman to raise funds for charity, which was held at the SSE Hydro arena.
In addition to Federer, Murray’s brother Jamie, Iranian tennis legend Mansour Bahrami, and fellow Brit Tim Henman also featured at Andy Murray Live.
The crowd were enthralled by not just the fantastic tennis action on court, but the little quirks that accompanied the game as well: Federer’s kilt aside, Murray played a part of the game in a ‘see you Jimmy’ hat, a potent and much loved symbol of Scotland.
Murray had also gone the extra mile to ensure his star guest would remember his time in Glasgow: waiting to welcome Federer as he entered the Hydro was a tin of shortbread, lovingly baked by Murray’s grandmother, as well as a can of Irn-Bru, a soft drink that is outrageously popular in Scotland because of its Scottish origins.
“In Glasgow for the evening to play in @andy_murray’s charity match,” said Federer on Twitter. “Scotland is beautiful even from the air!
“Can’t get a warmer welcome than this,” he quipped, in thanks to Murray’s gesture. “Thanks @andy_murray...is this your usual pre-match routine?
“Yea that's a good start but try a deep fried Mars bar on top of that and you'll be properly ready @rogerfederer,” retorted Murray in response.
Last year, Murray’s charity match raised about £305,000 for charity, with most of the proceeds going towards UNICEF and the Sunny Side Up foundation, which looks to raise people from poverty in third-world nations.
“Great to see you back on court @andy_murray,” he later tweeted. “Thanks for having me in Glasgow.”
Murray himself had previously tweeted his welcome to Swiss great Federer.
“Excited to announce @AndyMurrayLive 2017, looking forward to welcoming @rogerfederer to Glasgow!” he said.
Several fans and news broadcasters were quick to cotton on to the camaraderie at the Hydro.
“A career first for Roger Federer,” said BBC Sport. “He played tennis in a kilt earlier today,” as tennis fan Fi MacKinnon added, “Roger Federer is playing in a kilt!! It’s too brilliant!”
“Roger Federer beats Andy Murray 6-3 3-6 10-6,” exclaimed Stuart Fraser, tennis writer for The Times. “Murray finishes the match wearing a see you jimmy hat...”
“Roger Federer in a kilt. Legend. Invented fashion. GQ shook,” said tennis lover @DropVolleys, making a reference to global fashion magazine GQ.
“This is not a drill,” exclaimed Eurosport UK. “@RogerFederer is playing tennis in a kilt... and he's still winning points.”
The US Tennis Association probably said it best, though, simply tweeting, “When in Glasgow...” with a composite picture of Federer in his kilt and Murray in his hat.