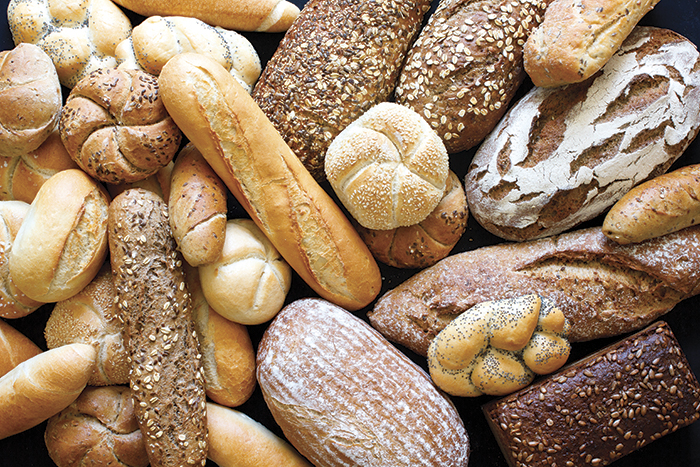 “All sorrows are less with bread,” said Miguel de Cervantes Saavedra, one of Spain’s greatest writer and how true is that.

Bread as we all know has existed as long as mankind and is widely devoured by one and all everywhere. There are innumerable bread varieties across the world and here are a few of them:

CIABATTA: It is an Italian wheat loaf with a porous crumb, made with yeast. Mostly seasoned with marjoram or rosemary, it is a popular sandwich bread and ideal for Panini.

CHAPPATI: A type of roti, chappati is a staple flatbread of India. It is made from whole-grain wheat, water and salt, rolled into discs of approximately five inches in diameter, cooked on a hot griddle and served with ghee (clarified butter). It is generally eaten with curry.

ENGLISH MUFFIN: A fork-split yeast roll related to the crumpet, popular as a breakfast bread and as the base for dishes such as eggs benedict. English muffins were originally made by cooking dough in a circular form on a griddle.

FOCACCIA: It is a rich, thick Italian snack bread. Olive oil is brushed over the dough prior to baking, to retain moisture. It is served with meals, used as a base for pizza and as sandwich bread. The word is derived from Latin word focus, meaning fireplace.

GARLIC BREAD: It is toasted bread, typically slices of baguette or other crusty loaf spread with garlic butter. Stale bread can be reused to make garlic bread. It goes perfectly with pasta and soups.

HOT CROSS BUN: This is a sweet yeast bun made with raisins. The top is decorated with a cross made of icing. The cross symbolises the crucifixion, and the buns are traditionally eaten on Good Friday.

KHACHAPURI: It is a Georgian cheese bread that resembles an Italian calzone. An oblong, individual portion of bread is filled with cheese and baked until the dough is cooked and the cheese inside is melted.

LAVASH: It is an Armenian flatbread made with wheat flour, water and salt. When fresh, lavash is soft and thin like a tortilla, it is used as a sandwich wrap for kebabs and other stuffing.

MARRAQUETA : It is a large roll with a soft interior and a crunchy exterior. It’s the most widely consumed bread in Chile. It is mostly used as sandwich bread that is stuffed with sausages and then grilled.

PITA: Is both a thick flatbread and a pocket bread consisting of a double layer of flatbread. It is the traditional bread in many Middle Eastern cuisines, and in Mediterranean cuisines from Africa to Greece. Pita is stuffed with kebabs and falafels and also used as a wrap for gyros.

PIZZA: Is a flatbread made in a variety of diameters as a base for cheese, tomatoes and other toppings. It is generally round in shape and now has a global presence. It originated from Italy and legend goes that on June 11 1889, to honour the Queen consort of Italy, Margherita of Savoy, the Neapolitan pizza maker Raffaele Esposito created the “Pizza Margherita”, a pizza garnished with tomatoes, mozzarella, and basil, to represent the national colours of Italy as on the Italian flag.

RYE BREAD: Hailing from Britain the rye bread is made from rye flour, which is higher in fibre and denser than wheat bread, and stronger in flavour. There are light and dark rye breads, depending on the flour. This is mostly used as a sandwich.

SCONES: They are traditionally made with wheat flour, sugar, baking powder or baking soda, butter, milk, and eggs, and baked in the oven. They are both in the traditional wedge form and in round, square and diamond shapes. They are lightly sweetened and sometimes glazed with egg wash. They are also made from barley and wheat and hails from England. Scone is a basic component of cream tea or Devonshire tea.

TORTILLA: It is a thin, unleavened flatbread, dating to prehistoric times. It is made from corn and hails from Mexico and is used to make quesadillas, burritos, enchiladas and many others.
—[email protected]