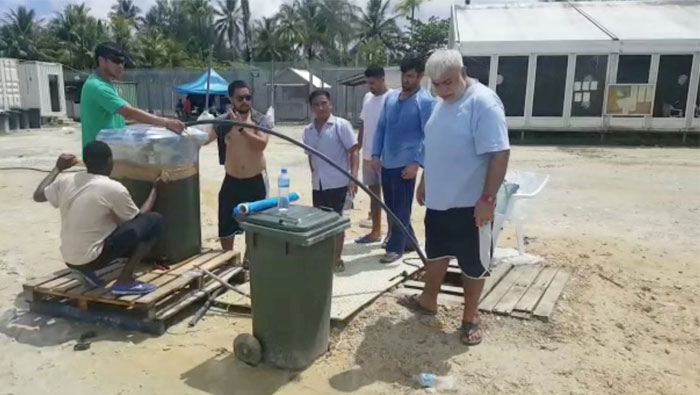 Sydney: A Papua New Guinea court will decide on Tuesday whether authorities in the Pacific nation should restore power, food and water to an Australian-run immigration detention centre where nearly 600 men have barricaded themselves for almost a week.
The men in the Manus Island facility have defied attempts by Australia and PNG to close the camp, saying they fear violent reprisals from the local community if they are moved to other "transit centres" on the island.
Lawyers for the asylum seekers on Monday applied to the PNG Supreme Court to order authorities to immediately restore food, water and electricity to the camp, citing heightened fears for the men's welfare, several of whom require medical treatment. A court timetable seen by Reuters shows the ruling is due Tuesday.
"The men really need food and water. They are severely dehydrated and a number of them have pretty serious health problems such as heart issues," Elaine Pearson, director of Human Rights Watch told Reuters.
Food remains extremely tight despite locals delivering some supplies over the weekend via boat to the rear of the camp, three asylum seekers told Reuters.
However, the asylum seekers said each detainee had barely enough food for one meal and that the supply line had since been closed.
"Today, the navy positioned personnel close to the beach to prevent any boats getting through. We have been surrounded by navy personnel determined to stop boats coming too close," Behrouz Boochani, one of the men at the camp, told Reuters.
Representatives for PNG's minister for immigration did not immediately respond to request for comment.
PNG's High Court ruled last year that the Manus centre, first opened in 2001, was illegal and the camp closed on Oct. 31, when security staff withdrew.
Australia's controversial offshore detention programme sees asylum seekers that arrive by boat to its shores transferred to camps in PNG and Nauru in the South Pacific, where they are detained.
The United Nations and rights groups have for years cited human rights abuses among detainees in the centres.
Australia on Sunday turned down an offer by New Zealand to take 150 asylum seekers being held in the camp.
The relocation of the men to other facilities on Manus Island is designed to afford the United States time to complete vetting of refugees as part of a refugee swap deal that Australia hopes will see it no longer responsible for the detention of nearly 1,400 asylum seekers who have been classified as refugees.
Those not accepted by the United States would likely be resettled in Papua New Guinea or in another developing country, dashing hopes of coming to Australia.