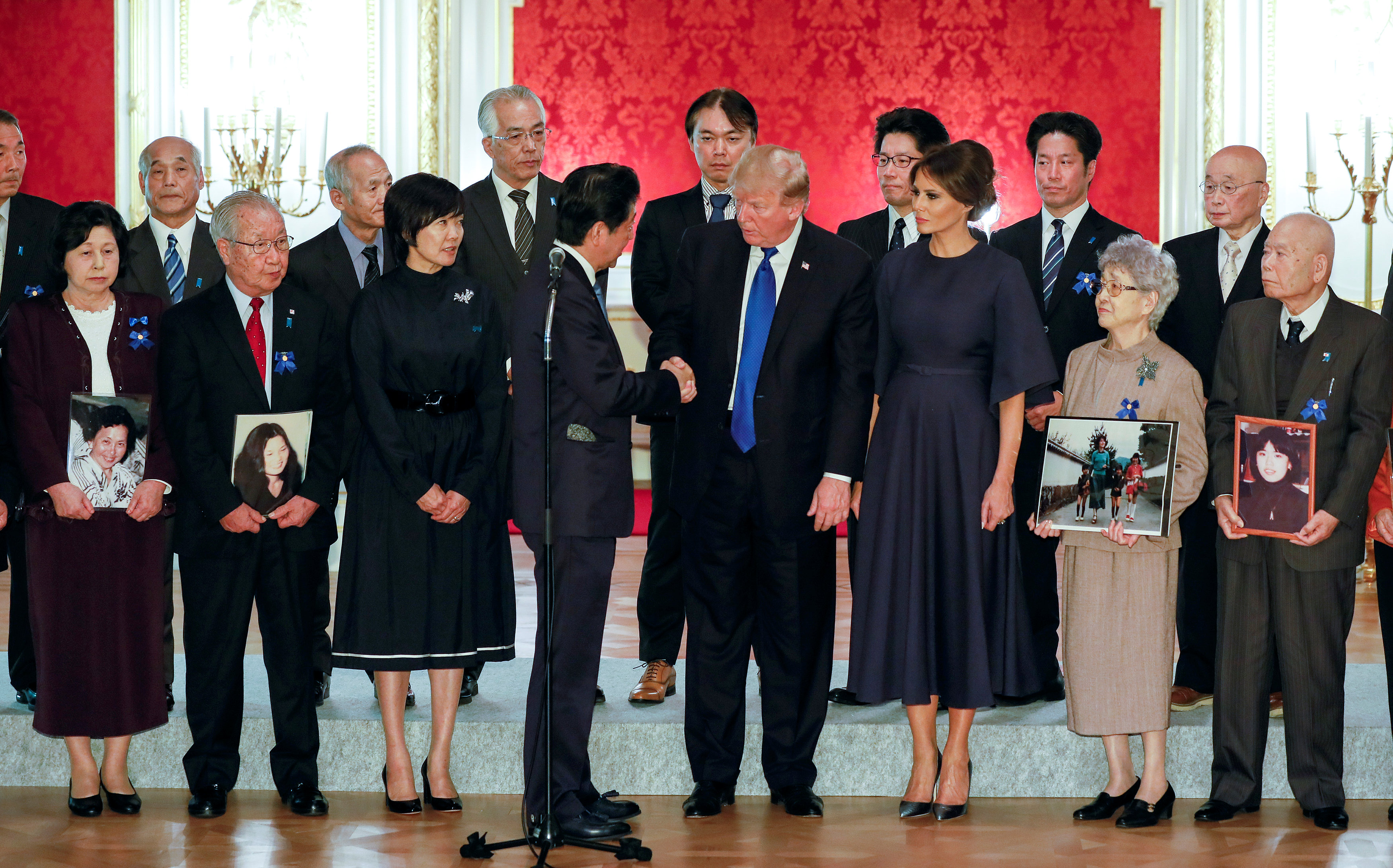 Tokyo: U.S. President Donald Trump said on Monday that America stood with close ally Japan against the North Korean "menace" and that Washington would work with Tokyo to sort out problems on trade between the world's biggest and third-largest economies.
Speaking after a summit with Japanese Prime Minister Shinzo Abe in Tokyo, Trump repeated his mantra the "era of strategic patience" with North Korea was over, and that the two countries were working to counter the "dangerous aggressions" of the North Korean regime, which has fired two rockets over Japan.
He said that Japan would shoot North Korean missiles "out of the sky" after completing purchases of U.S. military equipment.
Abe, for his part, said Tokyo would do so "if necessary".
Trump also pressed Japan to lower its trade deficit with the United States and buy more U.S. military hardware, but Abe dodged questions about the trade deficit.
The U.S. president is on the second day of a 12-day Asian trip that is focusing on trade and North Korea's nuclear missile programmes.
"Most importantly, we're working to counter the dangerous aggressions of the regime in North Korea," Trump said, calling Pyongyang's nuclear tests and recent launches of ballistic missiles over Japan "a threat to the civilized world and to international peace and stability".
"Some people said that my rhetoric is very strong. But look what's happened with very weak rhetoric over the last 25 years. Look where we are right now," he added.
North Korea's recent actions have raised the stakes in the most critical international challenge of Trump's presidency.
The U.S. leader has rattled some allies with his vow to "totally destroy" North Korea if it threatens the United States and with his dismissal of North Korean leader Kim Jong Un as a "rocket man" on a suicide mission.
Abe, with whom Trump has bonded through multiple summits and phone calls, repeated at the same news conference that Japan backed Trump's stance that "all options" are on the table, saying it was time to exert maximum pressure on North Korea and the two countries were "100 per cent" together on the issue.
Japan's policy is that it would only shoot down a missile if it were falling on Japanese territory or if it were judged to pose an "existential threat" to Japan because it was aimed at a U.S. target.
Chinese Foreign Ministry spokesman Hua Chunying, in response to Abe's comments, said that the North Korean "situation" was "already extremely complex, sensitive and weak".
"We hope that under the present circumstances, all sides’ words and actions can help reduce tensions and reestablish mutual trust and getting the North Korean nuclear issue back on the correct track of dialogue and negotiations," she said.
Trump said he was committed to achieving "free, fair, and reciprocal" trade and wants to work with Japan on this issue.
"America is also committed to improving our economic relationship with Japan," Trump said.
"As president, I'm committed to achieving fair, free, and reciprocal trading relationship. We seek equal and reliable access for American exports to Japan's markets in order to eliminate our chronic trade imbalances and deficits with Japan."
Earlier, speaking to Japanese and U.S. business executives, Trump praised Japan for buying U.S. military hardware, which he said was the "best military equipment in the world".
But he added that "many millions of cars are sold by Japan into the United States, whereas virtually no cars go from the United States into Japan".
Japan had a $69 billion trade surplus with the United States last year, according to the U.S. Treasury Department. The United States was Japan's second biggest trade partner after China, while Japan was the United States' fourth largest goods export market in 2016.
Japanese officials have countered U.S. trade complaints by noting Tokyo accounts for a much smaller slice of the U.S. deficit than in the past, while China's imbalance is bigger.
In a second round of economic talks in Washington last month, U.S. Vice President Mike Pence and Japanese Finance Minister Taro Aso, who doubles as deputy premier, failed to bridge differences on trade issues.
The two sides are at odds over how to frame future trade talks, with Tokyo pushing back against U.S. calls to discuss a bilateral free trade agreement (FTA).
Trump also said earlier that an Indo-Pacific trade framework would produce more in trade that the Trans-Pacific Partnership pact pushed by his predecessor but which he announced Washington would abandon soon after he took office.
The 11 remaining nations in the TPP, to which Japan's Abe is firmly committed, are edging closer to sealing a comprehensive free trade pact without the United States.
Trump met Emperor Akihito, exchanging a handshake and nodding, before his lunch and talks with Abe.
He also met relatives of Japanese citizens abducted by North Korean agents decades ago to help train spies, calling the kidnappings a "tremendous disgrace" and pledging to work with Abe to bring the victims "back to Japan where they want to be".
"I think it would be a tremendous signal if Kim Jong Un would send them back," Trump said. "If he would send them back, that would be the start of something, something very special."
Abe has made resolving the emotive abductions issue a keystone of his career. The families hope their talks with Trump - the third U.S. president they have met - will somehow contribute to a breakthrough, although experts say progress is unlikely.
Abe also expressed his condolences for the victims of a gunman who massacred at least 26 worshippers at a church in Texas.
White House spokeswoman Sarah Sanders said Trump had no plans to change the schedule for his 12-day Asian trip, which will also take him to Seoul, Beijing and Danang, Vietnam.