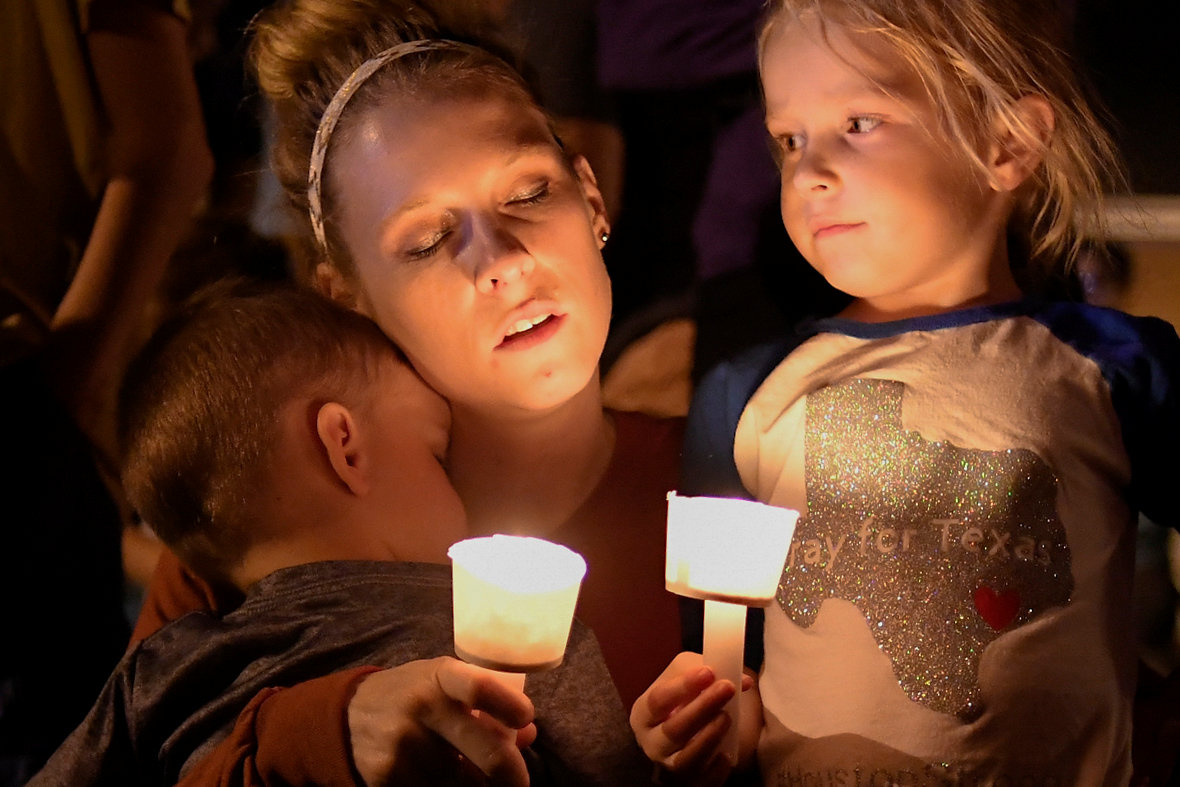 Sutherland Springs (Texas): A former bible studies volunteer teacher killed 26 people at a Texas church before locals shot him as he tried to escape, according to reports.
The suspect, former US soldier Devin Kelley, discharged from the service after an assault on his wife, used an assault rifle to kill children, a pregnant woman and other parishioners at the First Baptist Church in Sutherland Springs, Texas.
Kelley had previously volunteered as a teacher for bible studies at Kingsville First Baptist Church, according to his LinkedIn account, which shows a photo of him posing with a young child.
The gunman, dressed in black tactical gear, killed at least 26 worshippers and wounded 20 others at the white-steepled church in Texas on Sunday, carrying out the latest in a series of mass shootings that have plagued the US.
The lone suspect, also wearing a ballistic vest and carrying an assault rifle, fired into the First Baptist Church in Sutherland Springs and kept shooting after he went inside. Sutherland Springs is in Wilson County, about 65 km east of San Antonio.
The victims ranged in age from 5 to 72 years old, law enforcement officials told a news conference.
Among the dead was the 14-year-old daughter of Pastor Frank Pomeroy, the family told several television stations.
After the shooting, the gunman, described as a white man in his 20s, was fired on by a local resident with a rifle.
The suspect dropped his assault weapon, and fled in his vehicle, said Freeman Martin, regional director of the Texas Department of Public Safety.
Soon after, the suspect crashed his vehicle near the border of neighbouring Guadalupe County and was found dead inside with a cache of weapons.
It was not immediately clear if the suspect killed himself or was hit when the resident fired at him outside the church, authorities said.
“We are dealing with the largest mass shooting in our state’s history,” Texas Governor Greg Abbott said at the news conference.”The tragedy of course is worsened by the fact that it occurred in a church, a place of worship where these people were innocently gunned down.”
The suspect’s identity was not disclosed by authorities, but law enforcement officials who asked not to be named said he was Devin Patrick Kelley, described as a white, 26-year-old man, the New York Times and other media reported.
“We don’t think he had any connection to this church,” Wilson County Sheriff Joe Tackitt told CNN.”We have no motive.”
Jeff Forrest, a 36-year-old military veteran who lives a block away from the church, said what sounded like high-caliber, semi-automatic gunfire triggered memories of his four combat deployments with the Marine Corps.
“I was on the porch, I heard 10 rounds go off and then my ears just started ringing,” Forrest said.”I hit the deck and I just lay there.”
The massacre came just weeks after a sniper killed 58 people at an outdoor concert in Las Vegas, the deadliest mass shooting in modern U.S. history.
The shootings have stirred a year-long national debate over whether easy access to firearms was contributing to the trend.
President Donald Trump said he was monitoring the situation while in Japan on a 12-day Asian trip.
“This act of evil occurred as the victims and their families were in their place of sacred worship,” the president said.”Through the tears and through the sadness we stand strong, oh so strong.”
According to the witnesses, about 20 shots rang out at 11:30 a.m. (1730 GMT) during the church services, according to media reports.
It was unclear how many worshippers were inside at the time.
Connally Memorial Medical Centre in Floresville received eight patients, the hospital said in a statement, while Brooke Army Medical Centre at Fort Sam Houston received another eight.
At Connally, three people were treated and released, one is in critical condition and four were transferred to the University Hospital in San Antonio for a higher level of care. The First Baptist Church is one of two houses of worship in Sutherland Springs, an area home to fewer than 900 residents, according to the 2010 Census.
There are also two gas stations and a Dollar General store in town. The white-painted, one-story structure features a small steeple and a single front door. On Sunday, the Lone Star flag of Texas was flying alongside the U.S. flag and a third, unidentified banner.
Inside, there is a small raised platform on which members sang worship songs to guitar music and the pastor delivered a weekly sermon, according to videos posted on YouTube.
In one of the clips, a few dozen people, including young children, can be seen sitting in the wooden pews.
While authorities provided little information about the suspect, online records show that a man named Devon Patrick Kelley lived in New Braunfels, Texas, about 35 miles (56 km) north of Sutherland Springs.
The U.S. Air Force said Kelley served in its Logistics Readiness unit at Holloman Air Force Base in New Mexico from 2010 until his discharge.
Kelley’s Facebook page has been deleted, but cached photos show a profile picture where he appeared with two small children.
The shooting occurred on the eighth anniversary of the November 5, 2009, massacre of 13 people at the Fort Hood Army base in central Texas.
A U.S. Army Medical Corps psychiatrist convicted of the killings is now awaiting execution.
In 2015, a white gunman killed nine black parishioners at Emanuel African Methodist Episcopal Church in Charleston, South Carolina.
The gunman was sentenced to death for the racially motivated attack.
In September, a gunman killed a woman in the parking lot of a Tennessee church on Sunday morning and wounded six worshippers inside the building before shooting himself in a scuffle with an usher who rushed to stop the attack.