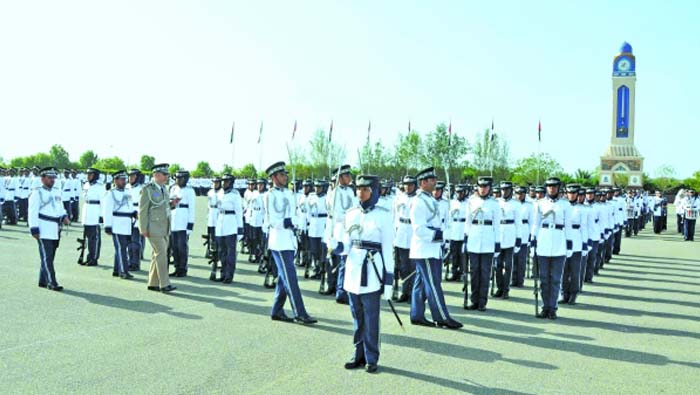 Duqm: Royal Oman Police (ROP) celebrated the opening of Special Task Force Unit in the Wilayat of Duqm in the Governorate of Al Wusta on Sunday and graduation of recruits during a ceremony held under the patronage of Yousef bin Alawi bin Abdullah, Minister Responsible for Foreign Affairs in the presence of Lt.Gen Hassan bin Mohsen Al Shraiqi, Inspector General of Police and Customs.
Upon the arrival of the chief guest to the parade ground, the column of the graduates performed the military salute. Then, the chief
guest inspected the first line of the graduates' column.
After that, the graduates marched before the grandstand. The chief guest later distributed awards to the top graduates. The graduates sang the ROP anthem and proclaimed thrice Long Live His Majesty Sultan Qaboos bin Said, the Supreme Commander of the Armed Forces.
After the graduates dismissed the parade ground, the Minister Responsible for Foreign Affairs accompanied by the Inspector General of Police and Customs unveiled the commemorative plaque declaring the official inauguration of the new unit. Then, they toured facilities of the unit.
The graduation ceremony was attended by their highnesses, ministers, advisors, honourable members at the State Council, members at Majlis A'Shura, senior officers at ROP, the Sultan's Armed Forces (SAF) and other security departments and citizens.