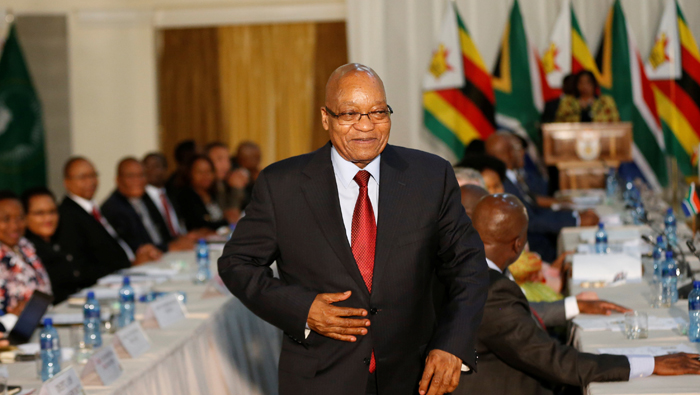 Johannesburg: South Africa's ruling African National Congress (ANC) is holding hundreds of branch meetings as grassroots members nominate candidates to take over from President Jacob Zuma as party chief in December.
The frontrunners are Deputy President Cyril Ramaphosa and Nkosazana Dlamini-Zuma, former chair of the African Union and Zuma's ex-wife, but with several other senior ANC figures running, the contest is too close to call.
The ANC's next leader will probably become president in 2019 given the party's electoral dominance.
First they face the tough task of winning back voters disillusioned with Zuma's rule and investors spooked by ratings downgrades.
The fractious, sometimes violent, branch meetings start the decisive final stretch of the race to succeed Zuma, whose rule has been marred by corruption allegations and a sharp economic slowdown.
Ramaphosa, a former union leader and one of the country's richest people, is viewed more favourably by foreign investors, who help cover the country's deficits.
Many of them are unsettled by Dlamini-Zuma's calls to radically redistribute wealth and change the ownership structure of the central bank. Ramaphosa and Dlamini-Zuma's campaign teams did not reply to requests for comment on reports of intimidation and manipulation of the nomination process in some provinces.
"The real fight is in December, but psychologically the battle for the soul of the ANC has begun," said Stan Itshegetseng, who chaired a branch meeting in the Diepkloof district of the sprawling Soweto township on Sunday.
It took 11 hours for Itshegetseng's branch of over 320 members to nominate Ramaphosa for ANC president, recommend more than 20 other officials for the party's National Executive Committee and agree on a delegate to send to the December party conference.
Nominations in the branches matter because they send 90 per cent of the more than 5,000 delegates who will vote in December.
Branch meetings started last month and are due to end in mid-November.
Unless change comes under the ANC's next leader, some analysts believe the ANC could lose the 2019 election, a once unthinkable scenario for a party that has led comfortably since sweeping to power under Nelson Mandela at the end of apartheid in 1994.
As the ANC's electoral majority has shrunk, so the battle for control of the party has intensified between the factions backing Dlamini-Zuma and Ramaphosa.
Zuma and the ANC's youth and women's leagues he controls want Dlamini-Zuma, while Ramaphosa is backed by a diverse group of labour unions, communists and ANC members who say the party has lost its way under Zuma.
Provincial ANC leaders are split.
Carol Sono, a branch member in Diepkloof, said Dlamini-Zuma's stints as health minister, foreign minister and home affairs minister meant she was the most qualified.
"It's only because of patriarchy that she wasn't chosen sooner," Sono said.
Kedi Saletese, a branch secretary in the Orlando district of Soweto, said only Ramaphosa could tackle corruption and help the ANC reclaim its image as a defender of ordinary South Africans.
"Now people see the ANC as a stepladder to enrich themselves. It makes you ashamed to wear an ANC T-shirt," she said.
Saletese's branch - like Itshegetseng's in Diepkloof - nominated Ramaphosa on Sunday.
The Gauteng province, where Soweto and the country's commercial capital, Johannesburg, are based, is an area where Ramaphosa enjoys strong support.
Ramaphosa also polls well in the Eastern Cape and Limpopo provinces, whereas Dlamini-Zuma is likely to receive a greater share of votes in provinces including her native Kwa-Zulu Natal and Mpumalanga, where the premier is viewed as a Zuma ally.
Earlier this year there was a spate of political killings in Kwa-Zulu Natal, and some officials have expressed concern there could be more bloodshed as the leadership race nears its climax.
At the three branches Reuters visited in Soweto on Sunday, there was no sign of violence, though a coordinator for Ramaphosa's campaign said he had been threatened with being "taken out permanently" for his choice of leader.
Activists for Ramaphosa and Dlamini-Zuma mingled with party members, urging loyalty before the nominations began. As Ramaphosa supporters emerged victorious from their branch meeting in Diepkloof, they started singing "Things will change".