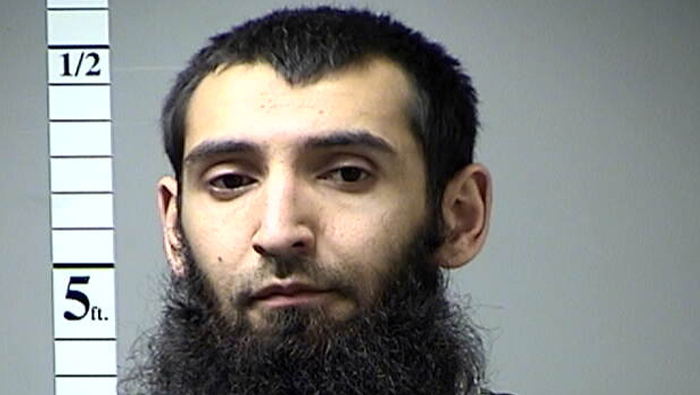 New York: U.S. investigators on Wednesday were focused on an Uzbek immigrant they said killed eight people in New York by driving a rental truck down a riverfront bike path in an attack authorities said had all the hallmarks of terrorism.
The suspect, who was shot by police and arrested moments after the Tuesday rampage in lower Manhattan, left a note saying he carried out the attack in the name of the militant IS group, the New York Times and CNN said.
It was the deadliest single attack on New York City since September 11, 2001, when suicide hijackers crashed two jetliners into the World Trade Center, killing more than 2,600 people.
A further 11 people were injured in Tuesday's attack.
Similar assaults using vehicles as weapons took place in Spain in August and in France and Germany last year. The suspect allegedly swerved the pickup onto a path filled with pedestrians and bicyclists on a sunny autumn afternoon, mowing down people in his path before slamming into the side of a school bus.
He then exited the vehicle brandishing what turned out to be a paint-ball gun and a pellet gun before a police officer shot him in the abdomen. The attack, which left crumpled bicycles scattered along the path and victims writhing on the ground, was over in seconds.
The suspect underwent surgery for gunshot wounds.
Police declined to publicly identify the man, but a source familiar with the investigation said his name was Sayfullo Saipov, 29. He reportedly lived in Paterson, New Jersey, a one-time industrial hub about 25 miles (40 km) northwest of lower Manhattan.
He had rented the pickup from a Home Depot Inc hardware store which, according to media accounts, was located in Passaic, just south of Paterson.
U.S. Senator Lindsey Graham urged authorities to treat Saipov as an enemy combatant, a move that would allow investigators to question the man without him having a lawyer present.
Six victims were pronounced dead at the scene and two more at a nearby hospital, Police Commissioner James O'Neill said.
Five of the dead were Argentine tourists, visiting New York as part of a group of friends celebrating the 30th anniversary of their high school graduation, the government there said.
Belgium's foreign minister said a Belgian citizen was also among those killed.
New York City Mayor Bill de Blasio said police will be out in force to protect the city's marathon on Sunday, one of the world's top road races, which draws some 51,000 runners from around the globe.
"You'll see a lot of officers with long guns. Other things you won't see that are protecting us," he told MSNBC.
A U.S. law enforcement official described the suspect as a U.S. immigrant born in Uzbekistan.
CNN and NBC News said he entered the United States in 2010.
Uzbekistan's President Shavkat Mirziyoyev said his government would do all it could to help investigate the "extremely brutal" attack. Authorities late on Tuesday surrounded a house in Paterson where, according to the New York Times, Saipov was believed to have lived. Paterson, known for its large immigrant population, is home to about 150,000 people, including 25,000 to 30,000 Muslims.
ABC News reported that Saipov had lived in Tampa, Florida.
A check of court records related to a traffic citation that Saipov received in eastern Pennsylvania in 2015 showed he listed addresses then in Paterson and Cuyahoga Falls, Ohio.
Although authorities from the mayor's office to the U.S. Department of Homeland Security all swiftly branded the attack an act of terrorism, New York Governor Andrew Cuomo stressed that the suspect was believed to have acted alone.
The New York Times said Saipov had come to the attention of law enforcement in the past.
It cited three officials as saying federal authorities knew of Saipov from an unrelated probe, although it was unclear whether that was because he had ties to someone who was under scrutiny or because he was the target of an investigation.
Last week an Uzbekistan citizen living in Brooklyn was sentenced to 15 years in prison for conspiring to support IS.
U.S. President Donald Trump, who has pressed for a ban on travelers entering the United States from some predominantly Muslim countries, said on Twitter that he had ordered Homeland Security officials to "step up our already Extreme Vetting Program.
Being politically correct is fine, but not for this!"
He also criticised the U.S. visa system, blaming Democrats and saying that he wanted a 'merit based' programme for immigrants to the United States.