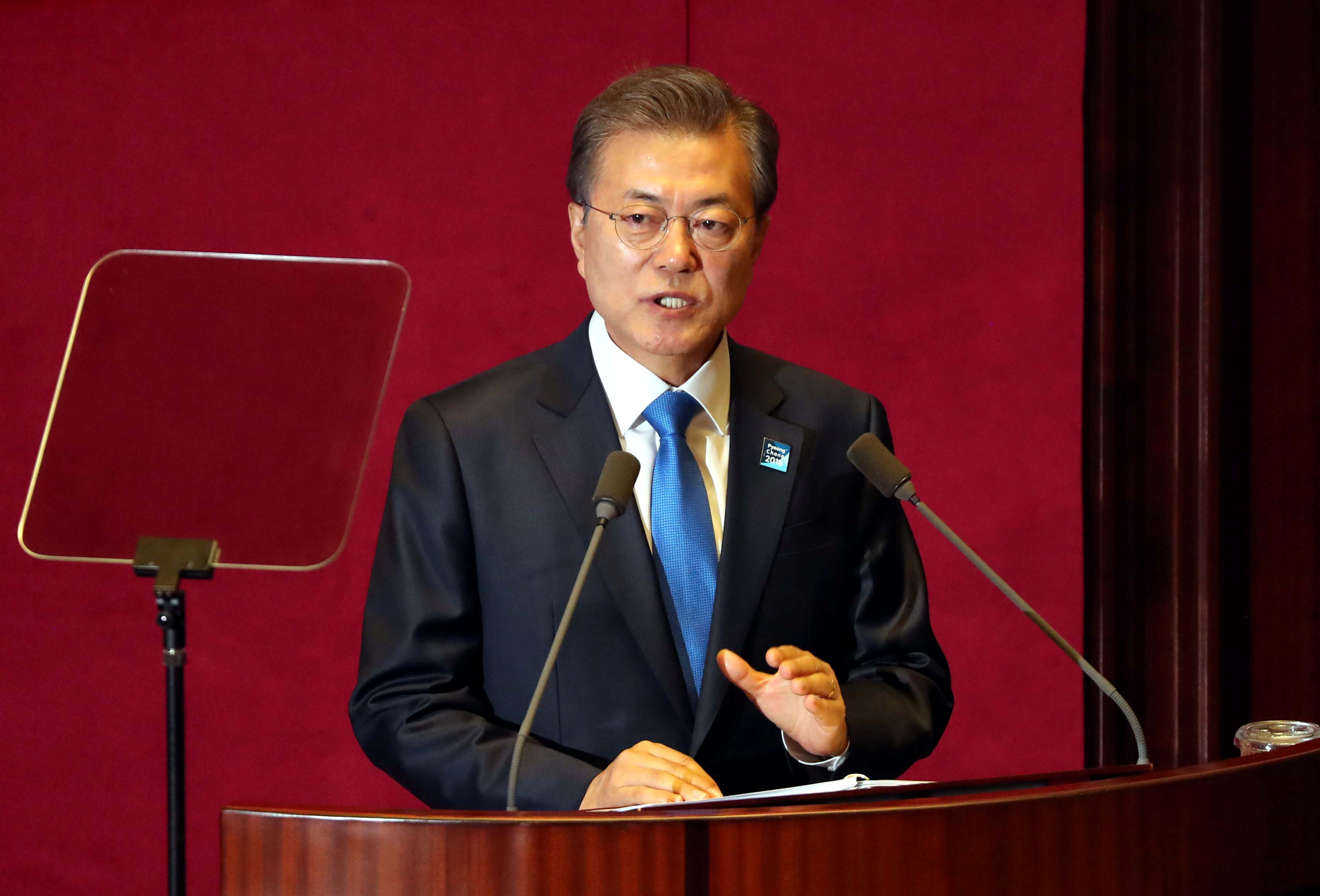 Seoul/Beijing: South Korea will never tolerate North Korea as a nuclear state, nor will Seoul have nuclear weapons, President Moon Jae-in said on Wednesday, as China pledged to work on denuclearisation after setting aside a dispute with Seoul over an anti-missile system.
The North Korea nuclear crisis will take centre stage when U.S. President Donald Trump begins a trip to Asia at the end of the week and diplomacy has being ramping up ahead of that visit.
A series of weapons tests by Pyongyang and a string of increasingly bellicose exchanges between Trump and North Korean leader Kim Jong Un in recent months has raised fears about an armed conflict.
Speaking to parliament, Moon said there can be no military action on the Korean peninsula without the South's consent, adding the government will continue working for peace on the peninsula.
"According to the joint denuclearisation declaration made by North and South Korea, we cannot tolerate or recognise North Korea as a nuclear state. We too, will not develop nuclear (weapons) or own them," he said.
"Our government was launched in the most serious of times in terms of security. The government is making efforts to stably manage the situation it faces as well as to bring about peace on the Korean peninsula."
China's foreign ministry said Beijing and Seoul will continue to use diplomatic means to address the Korean peninsula issue, after a meeting in Beijing between Lee Do-hoon, South Korea's representatives of stalled six-party nuclear talks, and his Chinese counterpart, Kong Xuanyou.
Moon's remarks and China's statement came a day after China and South Korea agreed to normalise relations to end a year-long standoff over the deployment of the U.S. Terminal High Altitude Area Defense (THAAD) system.
The installation of THAAD had angered China, which feared its powerful radar could see deep into China.
South Korea's tourism, cosmetics and entertainment industries bore the brunt of a Chinese backlash, although Beijing has never specifically linked that to the THAAD deployment.
North Korea's state media had no comment on the shift in ties between South Korea and China as of midday on Wednesday. It has not engaged in missile tests since mid-September or any nuclear tests since its biggest one early that month.
A senior Blue House official had said warmer bilateral ties had seemed to come about from better trust in Seoul by Beijing, which has expressed concerns regarding possible additional deployments of a U.S. anti-missile defence system and military cooperation among South Korea, the United States and Japan.
Earlier this week, South Korea's Foreign Minister Kang Kyung-hwa had said South Korea has no intention to join a U.S. missile-defence system in the region and would not host additional THAAD batteries. South Korea would not enter any trilateral military alliance with the United States and Japan, Kang added.
The United States is deciding whether three aircraft carriers currently in the Asia Pacific will carry out an exercise to coincide with Trump's trip to the region, two U.S. officials said. Japan's navy is considering sending one or more ships to the exercise if it is held, a Japanese government source said.
Trump's trip includes Tokyo, Seoul and Beijing but he will not go to the heavily fortified demilitarized zone (DMZ) on the border of North Korea and South Korea, a senior White House official said.
China's top newspaper, the Communist Party's official People's Daily, wrote in a commentary on Wednesday that China expected South Korea to take seriously its responsibility to protect regional peace now that they had set relations back on the correct track.
"The appropriate handling of the THAAD issue by China and South Korea can provide an opportunity for both countries to increase cooperation and communication on the peninsula issue," it said.
But influential state-run tabloid the Global Times warned there would not be an immediate improvement in cultural and business ties, with South Korean firms having to make an effort to win back Chinese customers.
"Whether or not Chinese consumers buy South Korean products is not totally up the Chinese government," it said in an editorial.
The rapprochement meant both countries were able to walk away with gains, said John Delury, professor at Seoul's Yonsei University.
"It is arguably Moon's first foreign policy breakthrough, giving South Korea's economy a boost and enhancing his geopolitical leverage by strengthening the relationship with China," said Delury.
"But Xi can also claim a victory - he made his point that Seoul needs to factor China's interests more seriously into its security posture, at least when it comes to things like missile defence that can alter the regional balance of power."