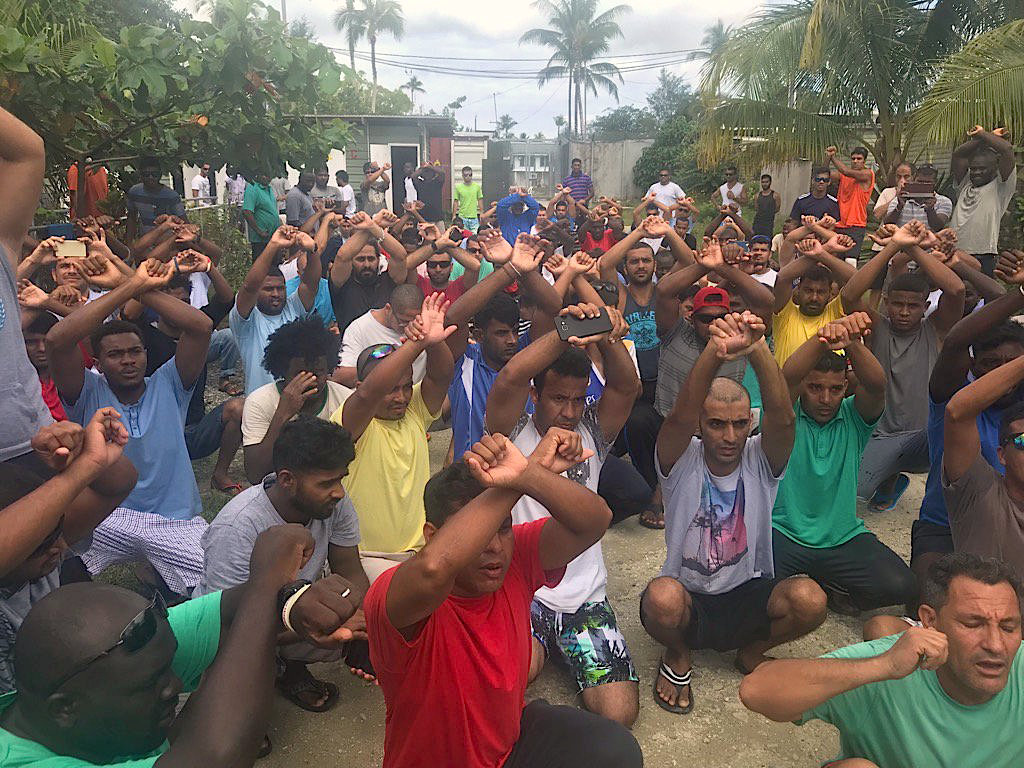 Sydney: Hundreds of asylum seekers refused to leave a detention centre in Papua New Guinea on Wednesday, even after power and water were cut and food supplies dwindled, in a stand-off that human rights groups warn could become a humanitarian crisis.
Australia and PNG are trying to close the Manus Island centre, one of two remote Pacific camps that Canberra uses to detain asylum seekers who arrive by boat. The camps have drawn widespread international condemnation.
The remote Manus island centre has been a key part of Australia's disputed "Sovereign Borders" immigration policy under which it refuses to allow asylum seekers arriving by boat to reach its shores, detaining them instead in PNG and Nauru in the South Pacific.
Around 600 detainees on Manus island are defying the attempts to close the camp, saying they fear violent reprisals from the local community.
The men refused to board a bus to a transit centre on the island on Wednesday, three of the asylum-seekers told Reuters, frustrating Australia's plans to dismantle part of its costly offshore detention programme.
"They took generators this morning and they cut the main pipes, there is no power in the whole centre and no water," Sudanese refugee Abdul Aziz told Reuters. "People are extremely anxious."
The asylum seekers, warned that utilities would be cut, had begun to collect rainwater in bins. However, without running water, advocates fear a rapid decline in sanitary conditions of the camp.
The loss of power also threatens to dampen morale of the detainees, nearly all of whom are suffering from mental health issues, according to a United Nations report in 2015.
"Mobile phones are a lifeline for these men," said Elaine Pearson, director of Human Rights Watch in Australia.
"They are completed isolated and they need phones to get real-time information about what is happening elsewhere on Manus, as well as to stay in touch with their families."
The detainees were sharing what food remained but some of the men Reuters spoke to by phone said supplies were running low. They had been given enough meals to last only until the camp's official closure on Tuesday.
Acting Australian Prime Minister Julie Bishop said the men should move to the new centres, which Australia has said it would support with A$250 million ($195 million) worth of food and security for the next 12 months.
The relocation of the men is designed as a temporary measure, allowing the United States time to complete vetting of refugees as part of a refugee swap deal that Australia hopes will see it no longer responsible for the detention of nearly 1,400 asylum seekers who have been classified as refugees.
Those not accepted by the United States would likely be resettled in PNG or in another developing country, dashing hopes of coming to Australia.
Vehement opposition among Manus residents to the asylum seekers has raised fears within the camp of potential violence, stoked further by the departure of Australian-employed private security guards on Tuesday.
"We did not sleep, about 30 guys at one time would keep watch for potential attacks," said an asylum seeker who asked to be identified only as Imran, due to fears his application for U.S. resettlement could be jeopardised.
Lawyers for some of the 600 men filed a last-minute suit in PNG's Supreme Court on Tuesday to prevent the camp's closure and for services to be returned.
A ruling is expected later on Wednesday.
PNG's High Court ruled last year that the Manus centre, first opened in 2001, was illegal. The United Nations and rights groups have for years cited human rights abuses among detainees in the centres.