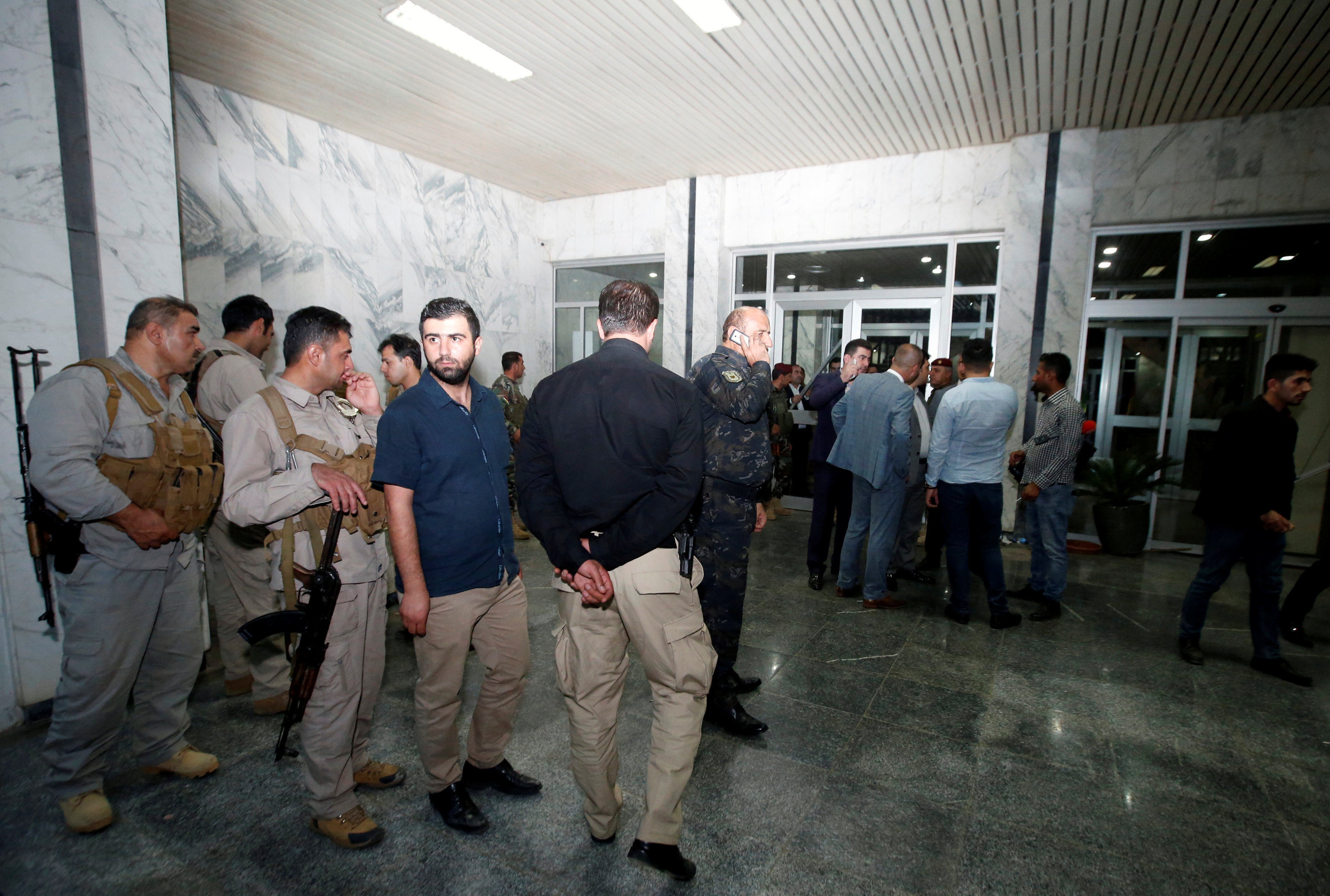 Baghdad: Iraqi Kurdish political parties opposed to Masoud Barzani, the outgoing Kurdistan region leader, reported attacks on their offices in several cities overnight hours after Barzani announced his resignation.
The Movement for Change, Gorran, and the Patriotic Union of Kurdistan (PUK) said in separate statements several of their offices in the Duhok region, north of the Kurdish capital Erbil, were looted or burnt overnight.
No casualties were reported.
The semi-autonomous Kurdistan Regional Government (KRG) in northern Iraq said it had ordered the local police forces, known as Asayish, to stop the attacks. Barzani said on Sunday he would give up his position as president on Nov. 1 after an independence referendum he championed in northern Iraq backfired and triggered military and economic retaliation by the Iraqi government.
Armed protesters stormed parliament as it met on Sunday to approve his resignation. Opposition MPs who had been barricaded inside managed to leave later, according to their parties.
Gorran and the PUK both support Kurdish self-determination but Gorran opposed the referendum, saying it was ill-timed. The PUK supported the vote half-heartedly. In a televised speech announcing his plan to step down, Barzani said followers of rival PUK founder Jalal Talabani, who died in early October, had been guilty of "high treason" for handing over the oil city of Kirkuk to Iraqi forces without a fight two weeks ago.
Earlier, there was high drama at the Kurdish parliament, which was stormed by armed protesters as it met to approve the veteran leader's resignation as Kurdish president. Some MPs were barricaded in their offices on Sunday evening.
In a televised address, his first since Iraqi forces launched a surprise offensive to recapture Kurdish-held territory on October 16, Barzani confirmed that he would not extend his presidential term after November 1 "under any conditions".
"I am the same Masoud Barzani, I am a Peshmerga (Kurdish fighter) and will continue to help my people in their struggle for independence," said Barzani, who has campaigned for Kurdish self-determination for nearly four decades.
The address followed a letter he sent to parliament in which he asked members to take measures to fill the resulting power vacuum.
The region's parliament met in the Kurdish capital Erbil on Sunday to discuss the letter. A majority of 70 Kurdish MPs voted to accept Barzani's request and 23 opposed it, Kurdish TV channels Rudaw and Kurdistan 24 said.
Demonstrators, some carrying clubs and guns, stormed the parliament building as the session was in progress.
Gunshots were heard. Some protesters outside the building said they wanted to "punish" MPs who they said had "insulted" Barzani. Some attacked journalists at the scene.
A Kurdish official had told Reuters on Saturday that Barzani had decided to hand over the presidency without waiting for elections that had been set for November 1 but which have now been delayed by eight months.
The region, which had enjoyed unprecedented autonomy for years, has been in turmoil since the independence referendum a month ago prompted military and economic retaliation from Iraq's central government in Baghdad.
In his address, Barzani vigorously defended his decision to hold the September 25 referendum, the results of which "can never be erased", he said. The vote was overwhelmingly for independence and triggered the military action by the Baghdad government and threats from neighbouring Turkey and Iran.
He added that the Iraqi attack on Kirkuk and other Kurdish held territory vindicated his postion that Baghdad no longer believed in federalism and instead wanted to curtail Kurdish rights.
Barzani condemned the United States for failing to back the Kurds. "We tried to stop bloodshed but the Iraqi forces and Popular Mobilization Front (militias) kept advancing, using U.S. weapons," he said.
"Our people should now question, whether the U.S. was aware of Iraq's attack and why they did not prevent it."
Asked for reaction to Barzani's resignation, a U.S. State Department spokesperson said: "I would refer you to Kurdistan officials for information on President Barzani. Also, we are not going to get into any private diplomatic discussions."
Barzani has been criticised by Kurdish opponents for the loss of the city of Kirkuk, oil-rich and considered by many Kurds to be their spiritual home.
His resignation could help facilitate a reconciliation between the Kurdistan Regional Government (KRG) and Iraq's central government, whose retaliatory measures since the referendum have transformed the balance of power in the north.
Barzani has led the KRG since it was established in 2005. His second term expired in 2013 but was extended without elections being held as IS militants swept across vast swathes of territory in Iraq and Syria.
U.S.-backed Iraqi government forces, paramilitaries and Kurdish fighters fought alongside each other to defeat IS but the alliance has faltered since the militants were largely defeated in the country.
After the Kurdish vote, Iraqi troops were ordered by the country's prime minister Haider Al Abadi to take control of areas claimed by both Baghdad and the KRG.
Abadi also wants to take control of the border crossings between the Kurdish region and Turkey, Iran and Syria, including one through which an oil export pipeline crosses into Turkey, carrying Iraqi and Kurdish crude oil.
The fall of Kirkuk - a multi-ethnic city which lies outside the KRG's official boundaries - to Iraqi forces on October 16 was a major symbolic and financial blow to the Kurds' independence drive because it halved the region's oil export revenue.
Iraqi forces and the Peshmerga started a second round of talks on Sunday to resolve a conflict over control of the Kurdistan region's border crossings, Iraqi state TV said.
A first round was held on Friday and Saturday, with Abadi ordering a 24-hour suspension on Friday of military operations against Kurdish forces.
He demanded on Thursday that the Kurds declare their referendum void, rejecting the KRG offer to suspend its independence push to resolve a crisis through talks, saying in a statement: "We won't accept anything but its cancellation and the respect of the constitution."