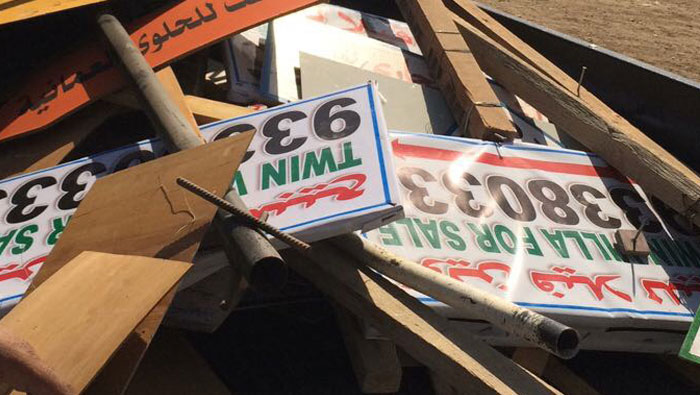 Muscat: The General Directorate of Muscat Municipality in As'Seeb continues removing illegal boards from different roads, neighborhoods and public places, based on Local Order No. 93/25 concerning the organization and monitoring of advertisements. The Municipality is keen to implement local regulations and orders and maintain aesthetic appearance and public facilities.
All forms of malformations, where some individuals and companies put random billboards to promote a particular commodity or service and suspend them in street lighting poles or traffic signals or on buildings and storefronts Or the main sidewalks and residential neighborhoods, which leads to distortion of the general appearance of the place as well as it is a violation of laws and regulations.
Article (5) of the Local Ordinance (93/25) concerning the organization and control of advertisements "That may not be placed or directly any advertisement only after obtaining a license from the municipality issued after confirming the safety of the advertisement and its conformity with the terms and paying the fees, as the article pointed out (7) of the local order itself, that prevents direct advertising in mosques and places of worship, ancient buildings, graveyards or parts of buildings in which the State undertakes public services. For private property, and with the exception of paintings bearing the brand name of the companies or institutions that exploit part of these buildings. The item (e) of Article (8) of the local order stipulates that the advertisement site must not cause obstruction to the pedestrians or traffic or breach and it shall not interfere with the organizational character of the city or neighborhood and shall not prejudice the general appearance of the advertisement. .
Article (124) of Local Order No. (23/92) concerning the organization of buildings in Muscat and its amendments indicates that it is not permissible to install any illuminated advertising, at streets or on walls, temporarily or permanently, only after obtaining the approval of the Municipality and the conditions it specifies and only after filling out a form of advertisements by the owner, taking into account not to distort the general view of the building .