Read this before decking out your car for Oman's National Day 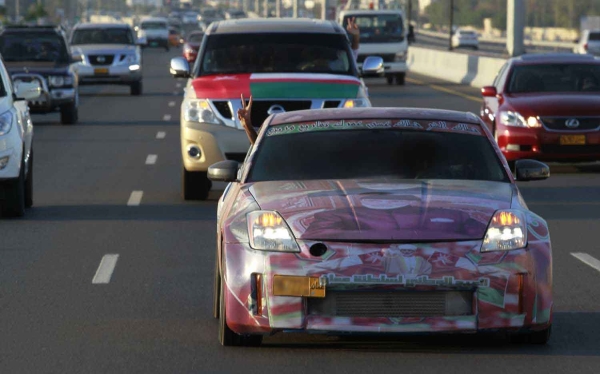 Muscat: Motorists will be allowed to decorate their cars with stickers as commemoration of the National Day from November 1 to November 30, the Royal Oman Police (ROP) said in an official tweet on Sunday.
The Sultanate celebrates its National Day on November 18.
According to ROP regulations, motorists may place stickers on the body of their vehicles and on rear windows so long as drivers can see through them the vehicles and objects coming from behind.
Stickers must not cover plate numbers, lights, the front windshield and side windows.
The only exception here is the fixed side windows of 4 wheel drive vehicles. Stickers must be fixed properly.
Decorating vehicles with unfixed textiles is not allowed, and they cannot be put on vehicle hood covers. Changing the vehicles colour and shape is also not allowed.
Experts also said people using stickers should make sure they do not block the drivers line of sight.
“It is always advisable that motorists should not install stickers on the front and rear windshield,” an Indian expatriate who supervises a number of car accessories shops in Muscat, said.
He also said that the increasing number of shops has made it a competitive field, and resulted in cheaper products. “People can now get their car decorated as little as OMR50,” he said.
On normal days, the Royal Oman Police fines drivers who place stickers on their cars. It allows such colourful decorations only in the month of November as part of the National Day commemoration activities.