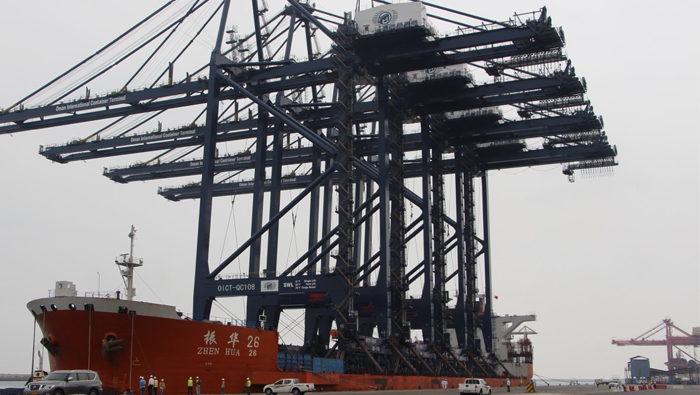 Muscat: Four new post-Panamax quay cranes have arrived at Sohar Port and Freezone’s state-of-the-art container terminal, as it continues its next phase of expansion.
The facility is jointly owned by Hutchison in Hong Kong, the Oman Government, C. Steinweg among other investors, and is operated by Oman International Container Terminal (OICT). In 2014, OICT shifted its operations to the new terminal C at Sohar in preparation for the relocation of all commercial traffic from Muscat’s Port Sultan Qaboos.
Last year saw Sohar handle nearly one million tonnes of cargo a week, a new record for the port that only saw its first ship arrive in 2004.
The new cranes arrived by sea from Shanghai (China), manufactured by the world-leading quay crane specialists Shanghai Zhenhua Heavy Industries (ZPMC).
The new quay cranes, each weighing hundreds of tones, will allow the container terminal to receive even bigger container vessels in future. The huge new cranes have an outreach to serve the latest 10,000 TEU container ships that already serve Sohar — and 20.000 TEU mega container ships in the future.
The handling capacity for container traffic at OICT in Sohar has more than doubled in the last two years. Sohar Port chief executive officer Andre Toet commented: “As more lines from Asia start to make more direct calls to Sohar, and the size of those container vessels continues to increase, Sohar Port Authority is actively working together with OICT and our other terminals to increase efficiency and help reduce costs.”
“For example, OICT recently introduced an automated truck appointment system to further reduce turnaround times and our Port Management System is a new online platform that allows agents to access and share real-time information on cargo movements. These technologies ultimately generate costs savings that we can pass on right the way along the supply chain and will help make Oman even more competitive as a regional logistics hub for the future,” he added.