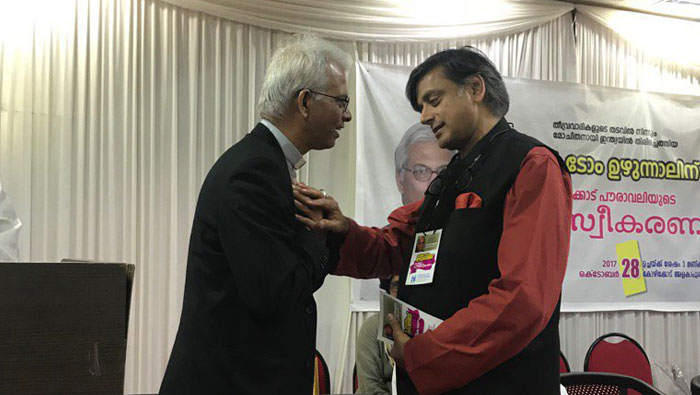 Muscat: Oman played a vital role in the release of Fr Tom Uzhannalil, an Indian parliamentarian tweeted.
“Fr Tom suffered untold privations but prayed for his captors as well as their victims. Oman had vital role in release,” Dr Shashi Tharoor, the Indian parliamentarian, tweeted on his official twitter handle.
The parliamentarian also uploaded a photograph of his meeting with Fr Tom.
Father Tom, an Indian priest, was abducted in Yemen. He spent 18 months in captivity and says he prayed for his attackers and was not afraid to die.
After negotiations, on September 12, a Royal Air Force of Oman aircraft was scrambled to the port city of Aden, where Uzhunnalil had worked and was held.
Fr Tom was flown first to the Omani capital, Muscat, soon after his release.
Following his release, Pope Francis also thanked the government of Oman for the timely intervention in the rescue.
"The Holy See fervently thanks all those who worked for his release, and especially His Majesty the Sultan of Oman and the competent authorities of the Sultanate," read a statement from the Holy See's press office, after news of the priest's release broke.
A native of the Indian state of Kerala, Fr. Uzhunnalil belonged to the Bangalore Salesian province, and had been working as a Vatican member at an old age care home set up in Aden by Mother Teresa's Missionaries of Charity.
He had been abducted by gunmen who stormed the facility on the 4th of March, 2016, taking him hostage and killing 16 other residents of the home, including four sisters, who served the elderly at the home, where he served as chaplain. About 80 residents lived in the care home at the time of the attack.
Almost immediately after news of the attack and Fr. Uzhunnalil's abduction made news around the world, Pope Francis appealed for the release of the priest, mentioning his name during his Easter sermons on April 4th, 2016.
Father Uzhunnalil's release was met with gratitude and relief, not just by himself, but also by senior members in the religious and political circles.
"In response to the Royal Orders of His Majesty Sultan Qaboos bin Said and as per a request from the Vatican to assist in the rescuing of a Vatican employee, the authorities concerned in Oman, in coordination with the Yemeni authorities, have managed to find a Vatican government employee," said Oman's government in a statement.
India's ambassador to Oman Indra Mani Pandey was also pleased to see Uzhunnalil freed.
"We are aware that he has been freed, and are happy that he is now out of danger," said Pandey.

"We would not like to share any more details about this at this time, and will wait for the Government of India to make a statement."
Indian External Affairs Minister Sushma Swaraj also expressed relief on his release, saying, "I am happy to inform that Father Tom Uzhunnalil has been rescued."
The Apostolic Vicariate of Southern Arabia, which oversees the welfare and development of churches in the UAE, Oman and Yemen, was also relieved to see father Tom out of danger.
In May, a video of the Indian priest was posted online and he was seen in poor health, calling for help.