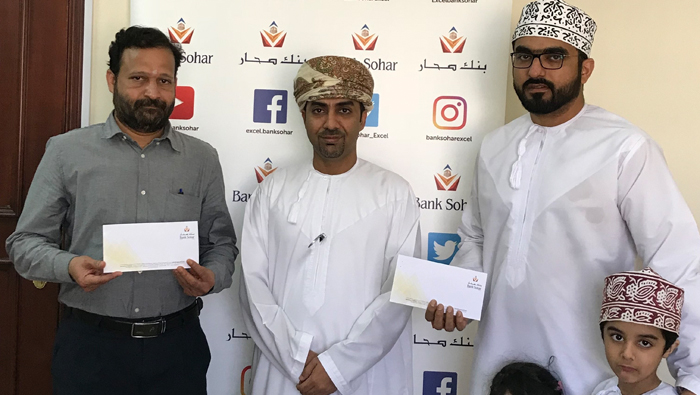 Muscat: Bank Sohar announced the winners of its recently conducted ‘I Pledge’ Facebook competition, awarding a cash prize of OMR1,000 to four lucky winners.
The prizes were handed over to winners at the bank’s head office where Afshan Mohammed Ayobwon the first prize of OMR400, Sharfunnisha Aziz won the second prize of OMR300, Hiba Hannan won the third prize of OMR200 and Karuna Karan Ayinam Varadhachari won the fourth prize of OMR100.
Elaborating on the competition, Mazin Mahmood Al Raisi, Senior AGM & head of Marketing and Customer Experience at Bank Sohar, said, “We are glad to have successfully conducted yet another online contest that brings us closer to our customers and helps spread our CSR philosophy under ‘Sohar Al Atta’. The Facebook contest reinforced the message of the ‘Rakiz Wa Souq’ road safety campaign and took it to a larger base of audience. We were impressed by the tremendous response that the contest generated, which demonstrates the campaign’s effectiveness at raising awareness on the important topic of traffic safety. On behalf of Bank Sohar, I would like to congratulate the winners; in fact congratulations to everybody who shared the pledge under the contest’s hashtag #I_Pledge.”
Bank Sohar conducted the ‘I Pledge’ contest from September 17 to 28 on its official Facebook fan page where followers were invited to participate by taking the pledge on themselves to abide by traffic safety rules and regulations, and to spread the message among their connections and circle of friends using the hashtag #I_Pledge. Participants had to comment on a series of educational road safety videos that the bank posted during the competition in order to stress the importance of road safety for all road users.