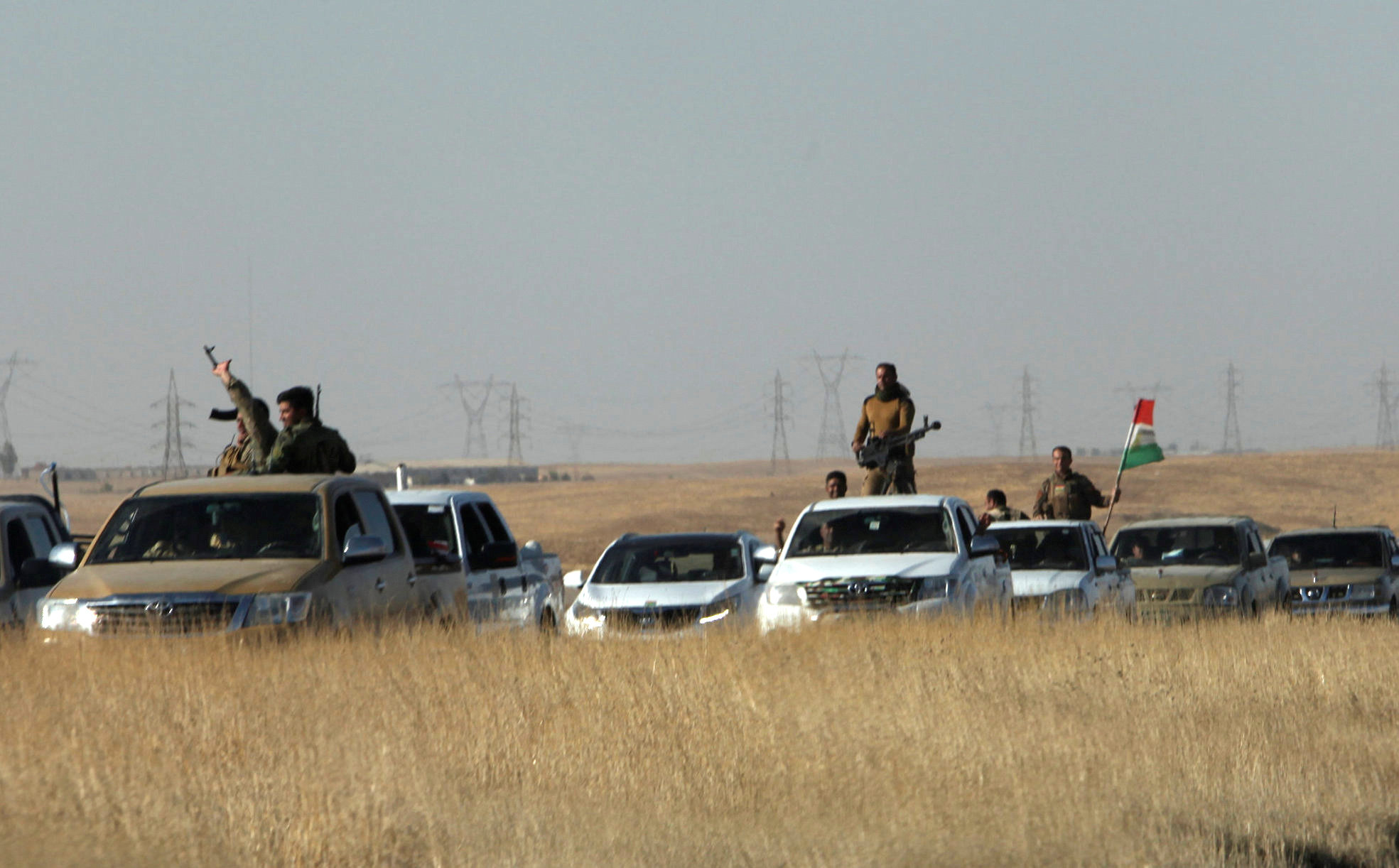 Baghdad: Iraqi pro-government paramilitaries launched an offensive against Kurdish troops on Tuesday near the Turkish frontier, pushing towards a strategic border crossing and oil export pipeline hub that Baghdad says must come under its control.
The Iraqi government has transformed the balance of power in the north of the country since launching a campaign last week to seize back territory from the Kurds, who govern an autonomous region of three northern provinces and had also seized a swathe of other territory in northern Iraq.
The Kurds held a referendum on independence last month that Baghdad called illegal. Baghdad responded by seizing back the city of Kirkuk, the oil-producing areas around it, and other territory that the Kurds had captured from IS militant group.
Prime Minister Haidar Abadi has ordered his army to recapture all disputed territory, and has also demanded central control of Iraq's border crossings with Turkey, all of which are inside the Kurdish autonomous region itself.
A Kurdish official said Kurdish security forces known as Peshmerga had successfully beaten back an advance by pro-government paramilitaries in the region of Rabi'a, 40 kilometers (25 miles) south of the Fish-Khabur border area.
Fish-Khabur is strategically vital because oil from both Kurdish and government-held parts of northern Iraq cross at a pipeline there into Turkey, the main route out of the area for international export, crucial for any Kurdish independence bid.
The fighting so far has taken place outside the Kurdish autonomous region, but Fish-Khabur is located within it, so any assault on the border crossing would mark a major escalation, bringing government troops into undisputed Kurdish territory.
An Iraqi military spokesman denied there had been any clashes in the area. But an Iraqi security source in Baghdad and a rights activist in northwest Iraq said the confrontation had started at dawn and was still going on by midday.
"Peshmerga repelled the attack and pushed Popular Mobilisation back in to Rabi'a," tweeted KRG President Masoud Barzani's media advisor, Hemin Hawrami. A military spokesman in Baghdad said in response: "There are no clashes."
The fighting between the central government and the Kurds is particularly tricky for the United States which is close allies of both sides, arming and training both the Kurds and the central government's army to fight against IS.
U.S. Secretary of State Rex Tillerson visited Baghdad this week, but Abadi rebuffed his call for Iraq to reject the role of paramilitaries that fight alongside government troops and have taken a hard line on the Kurds.
On Monday, an official of the Kurdistan Regional Government's (KRG) security council said Iraqi government forces and Popular Mobilisation paramilitaries were deploying tanks and artillery in Rabi'a, northwest of Mosul.
An Iraqi government security advisor said on Monday Baghdad aimed to bring the three-way border crossing with Turkey and Syria at Fish-Khabur under its control, but he declined to say if a military move was being prepared.
The Syrian side of the border there is under the control of U.S.-backed Syrian Kurdish forces.
The Fish-Khabur crossing has been under effective Kurdish control since 1991, when the United States and western powers imposed a no-fly zone over northern Iraq to protect the Kurds from Saddam Hussein's army.
The Iraqi government's advance over the past week has been achieved with comparatively little violence, with Kurds mostly withdrawing without a fight.
Nevertheless, Amnesty International reported that at least 11 civilians were killed and tens of thousands displaced from Kurdish areas of Tuz Khurmato, a town south of Kirkuk. It said images, videos, photos and dozens of testimonies indicated that hundreds of properties had been looted in a rampage targeting Kurdish parts of the ethnically mixed town.