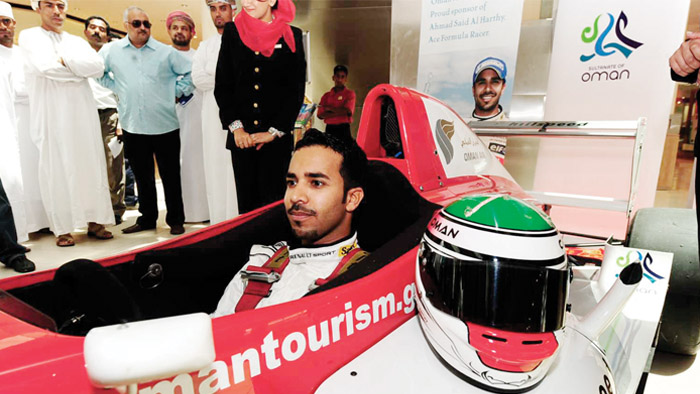 “It is a very proud moment for me to be winning the championship in one of Europe’s toughest championship. I also describe it like bringing the World Cup to Oman,” said Ahmad Al Harthy, the latest Blancpain Endurance Cup Pro-Am champion.
“It is the biggest championship and by far it is the biggest title that I’ve won in my 10 years of racing,” he said equating the championship to the Champion’s League in football terms. Al Harthy and his partner Jonny Adam made history by claiming the Pro-Am victory for Oman Racing earlier this year. “We won in Italy and we finished at the podium every race after that,” he said. “When you finish on the podium in a Blancpain Endurance Championship, everything has to go perfectly well.” He has carried the responsibility of being the first international circuit racer of the country for the last decade.
“I’ve been the first circuit racer in the country and I’ve held that title for seven to eight years. In the last three years, we’ve seen kids graduating from carting and coming to open wheelers,” he said.
The 36-year-old brought the name of the Sultanate in the world map with his exemplary performance in motorsport and endurance racing.

**media[758220]**
Oman Racing celebrates its 10th anniversary this year as Ahmad Al Harthy completes 10 successful years in motorsports. By winning the Pro-Am title and displaying consistency with a 100% podium finishing record for the season, Ahmad Al Harthy has made all his fans proud and has yet again proven to be an inspiration for many young drivers. He takes immense pride in being a role model to many young and aspiring Omani racers in Oman. “I hope this gives an opportunity to younger generation. This is where I come and lend my experience in racing,” he said.
Al Harthy, who has always been outspoken about road safety and people’s attitudes on public roads, has been advocating respectful driving ethics in Oman. “The respect we have on the racetrack is much more than what we have on the public roads. We are governed by rules and regulations that don’t allow us to overstep our boundaries. I would love to see more done on the education side of things, but for me it’s all about safety in the car.”
He has always dreamed of seeing Oman host a huge motorsport championship. “As a kid I’ve always envisioned a circuit race in Oman. Now, with me being involved in GT3 racing and seeing how much excitement it brings, I would love to see it one day. But it has to happen at the right time.”
—[email protected]