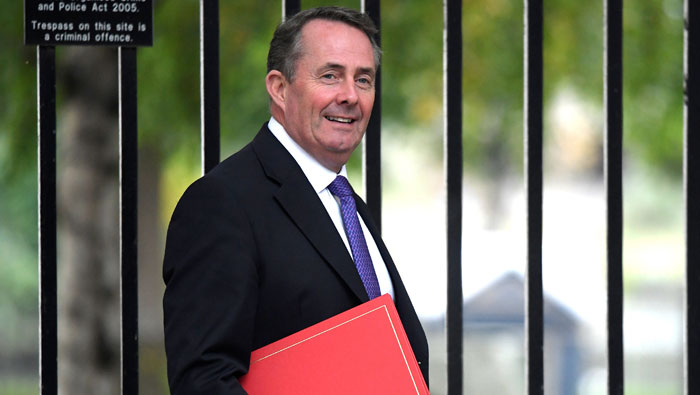 London: Britain can only come up with a figure for a financial settlement with the European Union when Brexit has been agreed, trade minister Liam Fox said on Sunday, warning leaders not to believe London is bluffing over a no deal.
Prime Minister Theresa May won a reprieve last week in the talks to unravel more than 40 years of union, when EU leaders offered a signal that the negotiations could move on to a discussion of future ties in December.
But the British leader, weakened after losing her Conservatives' majority in a June election and failing to reset her agenda at an ill-fated party conference, faces several hurdles at home before being able to force the talks forward.
She must get legislation to sever ties with the EU through both houses of parliament, and, on Sunday, the opposition Labour Party said it would team up with Conservative rebels to try to force changes to the EU withdrawal bill.
Fox, speaking on ITV television, said Britain would offer the other 27 EU members "further assurance" on its divorce before the next summit in December to unlock the talks to make way for a discussion of future trade ties.
"I don't know what that number is but it's very clear that we could only have that final number as part of a final agreement, we would want to know what the end state is," Fox said.
"Away from the hyperbole around the divorce bill there is actually a great deal of cooperation going on between us," he said, adding that the government would show the EU that "we are moving in the right direction" on the first phase of talks.
But he also said the EU should not believe that Britain was bluffing by saying it was preparing for a no deal, describing trading according to World Trade Organization rules as "not exactly a nightmare scenario".
May faces a delicate balancing act, not only in Brussels where she must respond to the EU's demands for more concrete pledges on the so-called divorce bill, but also at home, where some of her lawmakers want her to walk away from the talks.
Upping the pressure on her, Labour's Brexit spokesman Keir Starmer said the party would back Conservatives hoping to amend the EU withdrawal bill, which seeks to 'copy and paste' EU law into British legislation to ensure Britain has functioning laws and the same regulatory framework when it leaves.
Starmer said he wanted six changes to the bill, including parliament getting a final vote on any Brexit deal and a "completely different approach" to the use of the powers the government will have under the legislation, which will not be put before parliament until next month.
"I believe there is a consensus in Parliament for these changes," he wrote in the Sunday Times newspaper.