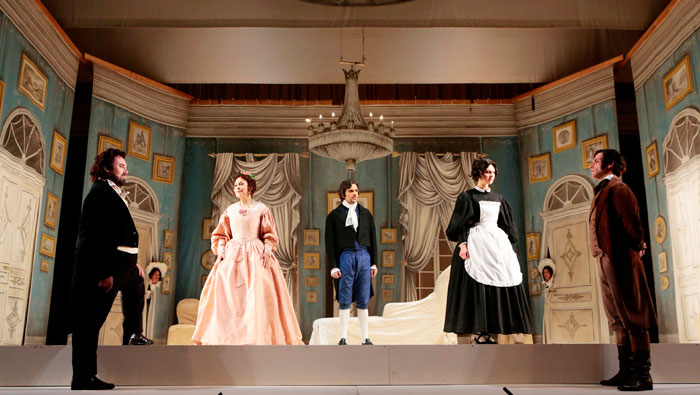 Muscat: Royal Opera House Muscat will present Gioachino Rossini’s comic opera “L’Occasione fa Il Ladro” translated into English “Opportunity Makes a Thief!”
A delightful funny and beautifully sung tale of identity theft and mixed-up romantic rivals reflects vividly humorous music and engaging plots for which Rossini is famed.
Through a cleverly conceived web of amusing obstacles, cunning deceptions and serendipitous twists of fate, audience are led on a journey through enchanting opera to a satisfying conclusion that those who are meant for each other eventually realise their hopes and dreams.
There could be no better choice than the Rossini Opera Festival to present this opera, for their unrivalled interpretations of Rossini’s ouevre.
The brilliant staging for this production was created by the masterful opera director Jean-Pierre Ponnelle (1932-1988) who was known for outstandingly beautiful aesthetics.
The big star is the Russian soprano, Olga Peretyatko who has won several awards in international competitions including Plácido Domingo’s Operalia.
She was the recipient of Italy’s highly prestigious Premio Franco Abbiatidella Critica Musicale Italiana. Olga Peretyatko is renowned for the suppleness and lush depth of her voice as well as the emotional range of her performances.
The leading man, a forgivable thief, is Russian tenor Maxim Mironov, considered one of today’s greatest Rossini interpreters. Mironov appeared at the ROHM last season in Rossini’s “L’Italiana in Algeri”. The Rossini Opera Festival’s roster of singing stars is made complete by the exceptionally talented comic singer Alfonso Antoniozzi.
The Orchestra Filarmonica Gioachino Rossini will be conducted by the renowned American maestro, Christopher Franklin who is sought-after as a guest conductor by the world’s finest orchestras.
The ROHM will present this highly entertaining comic opera on October 27 and October 28 (Friday and Saturday) at 7:00 pm.