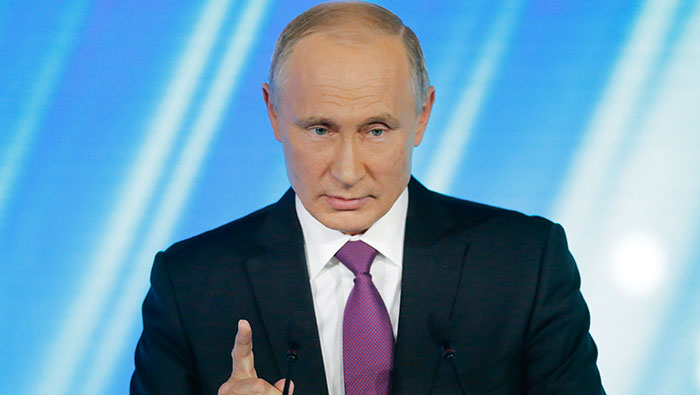 Sochi/Moscow: President Vladimir Putin launched one of his most stinging critiques of U.S. foreign policy on Thursday, listing what he called some of the biggest betrayals in U.S.-Russia relations.
He declined to say if he would run for a fourth presidential term in an election set for March, though he is expected to stand after dominating Russian politics for 18 years.
Instead, he used a high-profile televised discussion with foreign academics in southern Russia to reach back to what he regards as the darkest days of U.S.-Russia relations.
Opinion polls suggest that harsh rhetoric towards the West plays well with many Russian voters, who credit Putin for restoring national pride and standing up to what they see as Western encroachment.
Asked by a Germany-based academic to identify what mistakes Moscow had made in its relations with the West, Putin told the Valdai discussion forum in the Black Sea resort of Sochi:
"Our biggest mistake was that we trusted you too much. You interpreted our trust as weakness and you exploited that."
Visibly angry at times, Putin cast Russia as the wronged party and its post-Soviet leadership as too naive and trusting.
"Unfortunately, our Western partners, having divided the USSR's geopolitical legacy, were certain of their own incontestable righteousness having declared themselves the victors of the 'Cold War,'" said Putin.
"They started to openly interfere in the sovereign affairs of countries and to export democracy in the same way as in their time the Soviet leadership tried to export the Socialist revolution to the whole world."
Putin said U.S.-Russia relations were in a lamentable state, referencing an "unprecedented" anti-Russian campaign in the United States, the closure of Russian diplomatic facilities there and pressure on Russian media by U.S. authorities.
He did not single out U.S. President Donald Trump for personal criticism, but said Trump's behaviour was unpredictable as a result of political foes who were preventing him from fulfilling almost all of his policy pledges.
Litany of U.S. slights
Putin said the United States was trying to squeeze Russia out of European energy markets with its latest batch of sanctions, which Trump grudgingly signed into law in August after Congress approved them.
"The recent sanctions package adopted by the U.S. Congress was openly designed to push Russia out of European energy markets and to force Europe to switch to more expensive liquefied natural gas from the United States, even though the volumes there are not yet sufficient," he said.
He criticised Trump's predecessors, describing how he believed the United States had betrayed Russia in the 1990s by not reciprocating what he called the unprecedented access Moscow gave Washington to Russia's secret nuclear facilities.
He said the United States had flouted nuclear and chemical weapons treaties, saying Moscow had diligently complied with the same pacts only to be repeatedly let down by the United States.
His speech and ripostes in a punchy question and answer session that followed often sounded like a history lesson.
The United States had tried to stir up separatism in southern Russia in the 1990s, said Putin, something he said he knew for a fact from his stint leading the FSB spy agency.
The 2003 U.S.-led invasion of Iraq and NATO's 1999 bombing of Yugoslavia were bad, he said.
And in comments that could have been drawn straight from the pages of the Cold War, Putin accused the United States of upsetting the strategic nuclear balance by modernising its arsenal of weapons.
Russia would develop new weapons systems, he pledged, if it was forced to, and if the United States withdrew from a landmark arms control treaty — the Intermediate-range Nuclear Forces Treaty — Russia would hit back fast.
"From our side, the response will be instant, and I want to warn, symmetrical," said Putin.