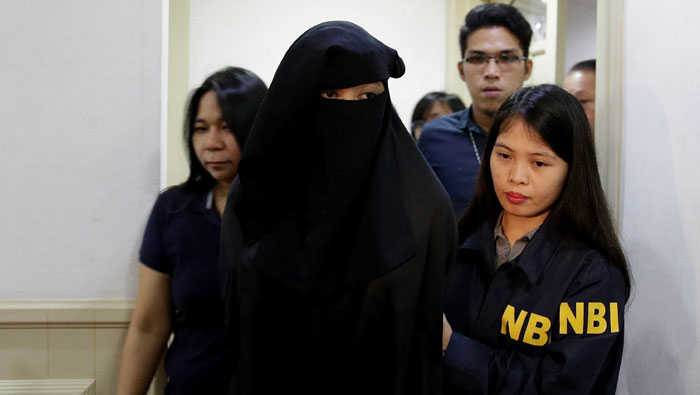 Manila: Philippine law enforcement agents have arrested a woman who tried to spread radical ideas and recruit hundreds of foreigners to reinforce pro-IS rebels occupying a southern city, the justice minister said on Wednesday.
Karen Aizha Hamidon, the widow of a former leader of a small extremist group in Mindanao, was arrested by special agents at her home in a Manila suburb a week ago and has been charged with inciting to rebellion, Vitaliano Aguirre told a news conference.
Hamidon is accused of using social media and messaging apps to call on foreigners to join the siege by an alliance of IS loyalists in Marawi City, a battle that has lasted nearly five months.
The military says the conflict, the biggest security crisis in years in the Philippines, is now in its final stages and has killed more than 1,000 people, mostly rebels.
"This is a welcome development in the fight against terrorism," Aguirre said.
Agents found she had made 296 posts in chatrooms on Telegram and WhatsApp "calling on Muslims in the Philippines, India and Singapore to come to Marawi to establish a province of the IS of Iraq and Syria", he said.
There were also about 250 names, mostly foreigners, in her phonebook who were suspected of being IS sympathisers.
Dressed in a black burqa, Hamidon was paraded before the media but was not allowed to speak. Her laptop, mobile phones and electronic gadgets were being looked at by experts for forensic investigation.
Hamidon, a Muslim convert, was married to Mohammad Jaafar Maguid, alias Tokboy, the former leader of radical group Ansar Al Khilafa. He was killed in a gunfight with police in January.
Aguirre said she was also linked to Singaporean and Australian extremists, both of whom are in detention in their countries.
But counter-terrorism expert Sidney Jones cast doubts about whether Hamidon had been effective. Jones said her presence in chatrooms of IS supporters was not welcomed, her credibility had been questioned and some participants blamed her for the arrests of radicals.
"Everyone hates her and thinks she's a spy," Jones said.