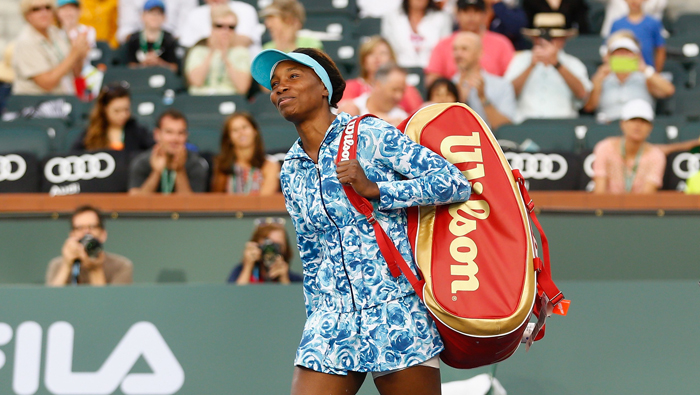 Indian Wells: Venus Williams' return to Indian Wells lasted just one match but sister Serena looked poised for a long run after a dominant win at the BNP Paribas Open on Friday.
Venus returned to the event for the first time since 2001, having boycotted it after being booed and heckled by fans during her previous trip, but made a quick exit after a 6-4 6-3 defeat to Japanese qualifier Kurumi Nara in the second round.
The 15-year-old incident had occurred when Venus withdrew from a semi-final match with Serena, drawing ire from the crowd aimed at the Williams family.
This time, though, Venus was greeted warmly by the crowd before her match and throughout it, a consolation for her poor performance.
"It was enough of a fairytale to come here and play," Venus told reporters. "A win would have been nice, but that means I have to come back, play next year."
Serena had no such issues with German opponent Laura Siegemund in a 6-2, 6-1 romp.
The world number one had already reconciled with the event last year when she ended her own boycott and she appeared freed up as she needed a little over an hour to advance.
"My intensity was key. I knew if I didn't start fast it was going to be a long match," Serena said.
In earlier action, third seeded Agnieszka Radwanska prevailed in a three-set thriller against Dominika Cibulkova 6-3, 3-6, 7-5. She rallied from an early 4-1 deficit to push through.
Defending champion Simona Halep made easy work of Vania King 6-1, 6-1.
Two-time Wimbledon champion Petra Kvitova, the No. 8 seed from the Czech Republic, needed a third-set tiebreaker in a 6-3, 4-6, 7-6 (5) victory over Danka Kovinic of Montenegro.