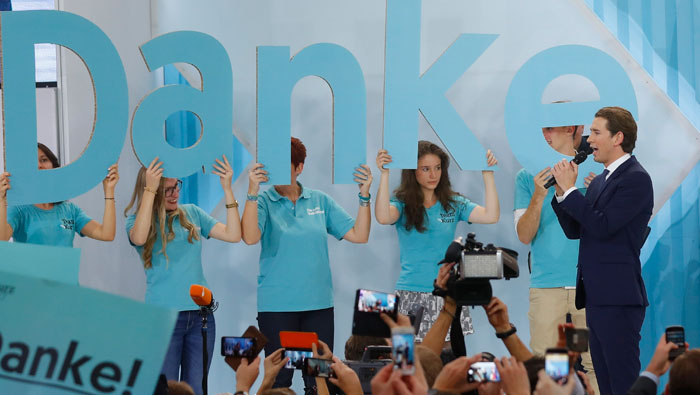 Vienna: Austria's shift to the right in a parliamentary election has paved the way for young conservative star Sebastian Kurz to become the next leader and opened a path for the resurgent far right to return to power.
The People's Party, which named 31-year-old Foreign Minister Kurz its leader only in May, secured a clear victory on Sunday with a hard line on immigration that left little space between it and the anti-Islam Freedom Party (FPO).
A coalition with the FPO is far from certain, but with Kurz's party short of a majority it is the most likely outcome.
That prospect prompted guarded expressions of concern from European leaders including Germany's Angela Merkel, who said the FPO's strong showing was a "big challenge" for other parties in Austria.
Kurz has been careful to avoid saying which coalition partner he might favour.
He has said any partner must be pro-European, without saying whether that rules out the FPO, which is critical of the bloc but no longer argues against membership.
"The (election) result is above all a clear victory for the European Union, it is a clear victory for us as a pro-European force," Kurz told Reuters. His party's manifesto calls for a smaller European Commission and a streamlined EU that focuses on "core competences" such as internal trade and securing the bloc's external borders.
But he declined to be drawn on specific plans.
Austria was a gateway into Germany for more than a million people fleeing war and poverty in the Middle East and elsewhere during Europe's migration crisis which began in 2015. It also took in more than one percent of its population in asylum seekers that year.
That led many voters to feel the country was overrun.
Austria's shift to the right came after German voters last month punished Merkel's open-door policy for migrants, pushing her conservative bloc to its worst showing since 1949 and putting the far-right AfD party in parliament.
The FPO was founded by former Nazis in the 1950s and went from minnow to political heavyweight in the 1990s under the charismatic Joerg Haider, who praised Hitler's employment policies.
It was one of the first far-right parties to enjoy mainstream success in Europe since World War Two.
When the FPO went into government in 2000 with the conservative party Kurz now leads, the rest of the European Union reacted with outrage and imposed sanctions on Austria.
The FPO is now a sister to France's National Front and Germany's AfD.
Though on course to be one of the world's youngest leaders, Kurz is a relative veteran in government.
He entered cabinet as a secretary of state for integration six years ago and has been foreign minister for the past three.
He made immigration his core issue, arguing against his own coalition government's decision to throw open Austria's borders in lock step with Merkel's Germany during the migration crisis.
That helped cement his reputation as a polished straight talker and make him the country's most popular politician.
Kurz called an end to a coalition with the Social Democrats, prompting Sunday's election, and the two sides are at loggerheads, making a tie-up with the FPO more likely.
No other party is large enough to secure a majority.
The race between the FPO and Chancellor Christian Kern's Social Democrats was too close to call after Sunday's count, leaving it to postal ballots -- roughly a sixth of all votes cast -- to tell them apart.
The bulk of those ballots are expected to be counted on Monday.
The FPO was ahead on Sunday but pollsters' projections show that postal ballots should swing the vote against it, as they did in last year's close-fought presidential election.
"We are not yet in the phase of coalition talks," said Kurz, adding that he would await the final result.
If the FPO came second, it would improve its odds of going into government with Kurz, since the Social Democrats would only consider a 'coalition of losers' with the FPO if the far-right party were the junior partner.
In June the Social Democrats lifted a self-imposed ban on coalitions with the FPO that had been in place for 30 years, implicitly recognising the difficulty of forming governments without a party on course to secure more than 26 pe rcent of Sunday's votes.
After decades in parliament, the Freedom Party has sought to become increasingly mainstream.