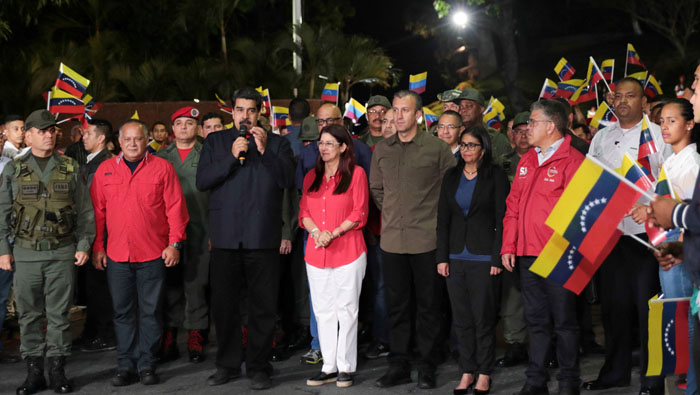 Caracas: Venezuela's opposition refused on Monday to recognise a surprise win for the ruling socialists in weekend regional elections, potentially rekindling protests and fresh foreign sanctions on the oil-rich country's moribund economy.
President Nicolas Maduro's candidates took 17 governorships, versus six for the opposition, in Sunday's nationwide poll, according to the pro-government electoral board.
The Socialist Party's strong showing comes amid devastating food shortages, triple-digit inflation, and a collapsing currency in the South American OPEC nation.
Polls suggested the opposition would easily win a majority.
Dismayed leaders of the Democratic Unity coalition decried irregularities, called for street action on Monday, and demanded an audit, but they did not offer any evidence of fraud.
"Neither Venezuelans nor the world will swallow this fiction," said grave-faced opposition campaign chief Gerardo Blyde at a midnight news conference.
"We played by the rules with a democratic conscience ... but this electoral system is not trustworthy."
Critics called for the electoral board to release more detailed results, to cross-reference with opposition observers' tallies.
Dispirited about chances of removing Maduro through protests or the ballot box, many Venezuelan opposition supporters now hope foreign pressure, such as sanctions, will hurt him.
The Trump administration has already imposed sanctions on Venezuelan officials, including Maduro.
In August, it also imposed financial sanctions in an effort to cut back funds for the already severely cash-strapped government.
The European Union could also take measures against Maduro, a former bus driver and foreign minister narrowly elected to replace the late leader Hugo Chavez in 2013.
At home, it seems unlikely opposition supporters are willing to return to the streets after four months of grueling protests this year failed to pressure the government into holding an early presidential election, freeing jailed activists or accepting humanitarian aid.
At least 125 people died, while thousands were injured and arrested in violence that brought parts of Venezuela to a standstill as hooded youths battled security forces.
"Obviously, this was a brutal fraud," said David Osorio, 21, who lost an eye when hit by a gas cannister during the clashes. "But I don't know if going back to the streets is best ... because the same will happen and many are simply not willing."
Sunday's disputed result will likely dash opposition hopes that the unpopular Maduro can be removed in next year's presidential election, possibly worsening disputes over strategy in the perennially divided coalition.
One prominent opposition figure, legislator Jose Guerra, said the coalition should be careful about calling the results fraud, saying that disillusioned supporters who stayed away from the polls played a big role.
"We shot ourselves in the foot," he said, noting record turnout of 74 per cent in 2015 legislative elections, which the opposition won, versus 61 per cent on Sunday.
Venezuelan bond prices were mostly down on Monday morning in a sign of investor pessimism.
The opposition's electoral setback could further speed a flow of emigrants to other Latin American countries, Spain, and the United States, as many Venezuelans now fear the long-running political crisis will drag on for years.
"There's no money, no food, no medicine, no security. Yet according to the government, everyone voted for them?" said a skeptical Gloria Torres, 56, once a staunch supporter of former President Hugo Chavez.
Of her two children, one has gone to Canada and the other is looking to leave.
Flanked by his powerful wife, soldiers, and red-shirted party members, a buoyant Maduro appeared on state television to celebrate victory and paint the opposition as sore losers.
"When they lose they cry fraud. When they win they shout 'Down with Maduro,'" said Maduro, 54, ordering a full audit to demonstrate transparency.
The opposition pocketed governorships including in the turbulent Andean states of Merida and Tachira, the oil-producing region of Zulia, and the jungle-and-savannah state of Bolivar.
The government, which had controlled 20 of the 23 governorships, took states across Venezuela's languid plains and steamy Caribbean coast. It won back populous Miranda state, which includes part of capital Caracas, with an up-and-coming star of the Socialist Party, Hector Rodriguez.
It also won in Barinas, Chavez' home state in Venezuela's agricultural belt that government supporters regard as the 'cradle of the revolution.' "The result is another sham. It is inconceivable the Socialist Party won 54 per cent of the vote, as President Nicolas Maduro claimed, even with abstentions affecting the Democratic Union vote," said an analyst Nicholas Watson at the Teneo Intelligence consultancy.
"(But) the opposition's case that the government committed fraud will be difficult to prove, and any legal challenges will likely come to nothing in government-controlled courts, while the election board will choke off demands for a vote audit."
The opposition has cried fraud at some past votes, but has lacked substantial detailed evidence.
After a controversial vote in July for a pro-government legislative superbody, Reuters obtained a document showing irregularities in the reported results.
Smartmatic, the U.K.-based company that provided the technology for the vote, said the results had been manipulated by at least 1 million ballots.
Authorities denied any wrongdoing.
The government does retain significant support in poorer, rural settings and Venezuela's elite-led opposition has struggled to capitalize on discontent over the economy.
Socialist candidates, invoking the popular Chavez at every rally, urged Venezuelans to vote against the opposition "candidates of violence," whom they accuse of plotting a coup under the veneer of peaceful protest.
"I want peace, not terrorism," said customs official Franquelsi Anciana, who cast a vote for the government candidate in the western city of Maracaibo.