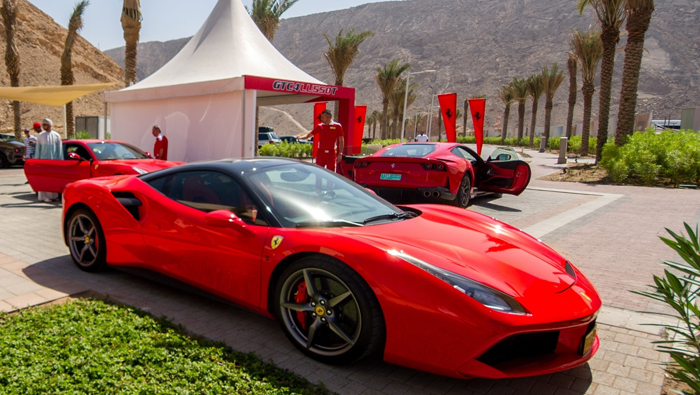 Muscat: Alfardan Motors, the official importer of Ferrari in the Sultanate, hosted an action-packed day for distinguished guests and prospective owners during an exclusive Ferrari Esperienza test-drive event.
Held at Muscat Bay, guests experienced the full power and handling of the Ferrari 812 Superfast and GTC4Lusso T – which were recently launched in Oman – and 488 GTB along Muscat’s stunning mountain routes.
The experience commenced with a detailed briefing on vehicle performance, handling and innovation conducted by professional Ferrari instructors flown in from Maranello, Italy, especially for the event. Following the briefing, guests were afforded the pleasure of partaking in the legendary Ferrari DNA experience, behind the wheel of two of the Prancing Horse’s finest models.
Ferrari 812 Superfast
The 812 Superfast ushers in a new era in Ferrari 12-cylinder history, unleashing a massive 800 CV and sprints from 0-100km/h in 2.9 seconds, making it the most powerful and fastest road-going Ferrari ever built. The 812 Superfast is equipped with leading-edge vehicle dynamics control systems and components. It is striking for both its highly innovative design and aero package, as well as its unparalleled handling. It is also the first Ferrari to sports EPS (Electric Power Steering). Simply put, the 812 Superfast is the new benchmark for mid-front-engined sports cars. And at its heart is the new 12-cylinder which has forged its character.
GTC4Lusso T
The GTC4Lusso T’s V8 twin turbo engine is the latest evolution to emerge from the engine family that was named the 2016 International Engine of the Year.The 3,855 cc power unit is both compact and efficient, developing 610 cv at 7,500 rpm. It also responds instantaneously to the throttle delivering increasingly powerful acceleration while optimising fuel consumption. Designed by Ferrari’s Styling Centre, the GTC4Lusso T maintains the same innovative take on the shooting brake coupé as the V12 version, reinterpreting the concept with an extremely streamlined, tapered shape that gives it an almost fastback-like silhouette.
488GTB
The Ferrari 488 GTB’s 3902 cc V8 turbo is at the top of its class in terms of power output, torque and response times. It delivers 670 cv at 8,000 rpm and a response time to the accelerator of just 0.8 seconds (at 2,000 rpm in third gear), making it the new benchmark for this kind of architecture, thanks in part to innovative work carried out on the turbine to reduce friction and inertia. Ferrari’s engineers dedicated great attention and resources to perfecting the car’s sound too, creating a new soundtrack that is full, clear, progressive and totally distinctive, as expected from any Prancing Horse engine.
Since opening its first showroom in 2012, Alfardan Motors has provided a world-class service to the growing number of luxury car and motorcycle clients in Oman.