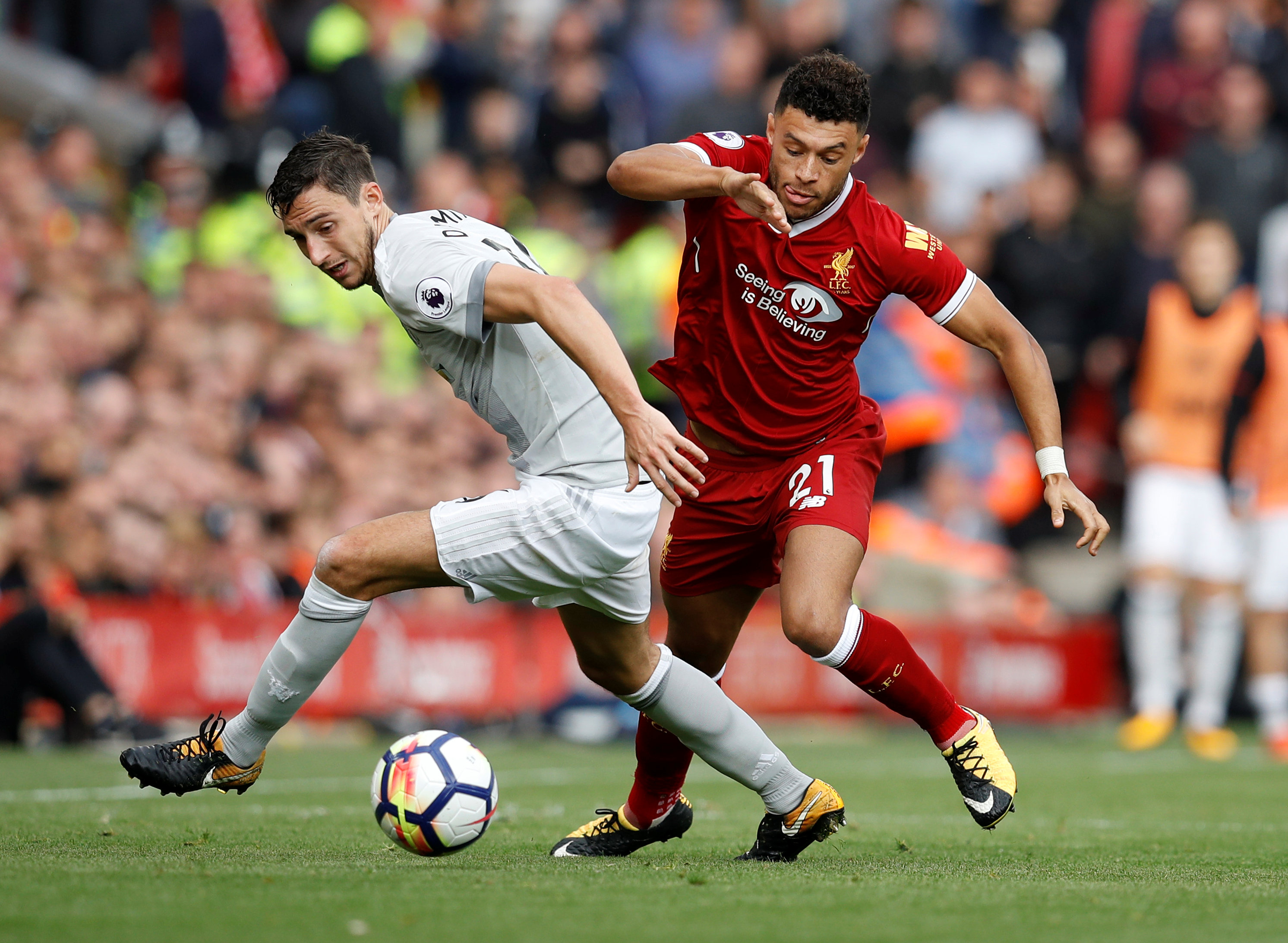 London: Alex Oxlade-Chamberlain has not enjoyed the smoothest of starts to his Liverpool career and will be hoping to kickstart it in Tuesday's Champions League game at NK Maribor.
The 24-year-old England international, who signed from Arsenal in August for £35 million ($47 million), has yet to begin a Premier League game for his new team.
Against Manchester United on Saturday he was granted a forgettable 12 minutes, following on from nine at Newcastle United and 12 against Burnley and Leicester City. He came on at halftime against Manchester City when Liverpool were two goals and a man down.
Oxlade-Chamberlain's only start was in the League Cup defeat by Leicester and he has chalked up less than 200 minutes on the field since becoming one of Liverpool's most expensive signings.
Juergen Klopp's decision not to unleash him on United said much about Oxlade-Chamberlain's lack of progress. With Sadio Mane injured, he could have played on the wing but the manager opted to push Philippe Coutinho wide and bring Emre Can into midfield.
Klopp justified his decision by suggesting that Oxlade-Chamberlain, who has 30 England caps and been playing at the top level for seven years, needed more time to adapt to the Liverpool way.
"We play different to Arsenal, that's clear," the German said. "It doesn't mean we play better or worse, just different."
Missed chance
By contrast, Mohamed Salah, Liverpool's other main summer signing, has fitted in seamlessly even though he arrived with much less Premier League experience.
Oxlade-Chamberlain hardly helped himself by missing a close-range chance against Newcastle, but it is not the start he was hoping for after rejecting a new contact at Arsenal and the chance to join Chelsea because he was keen to work under Klopp.
Ironically, part of the problem may lie with his versatility, which is probably what attracted Liverpool in the first place. Since making his debut as a precocious 16-year-old with Southampton, Oxlade-Chamberlain has struggled to establish himself in one position.
He said he wanted to become a central midfielder "like Steven Gerrard" at Liverpool but he faces stiff competition for places with England's Jordan Henderson and Adam Lallana, Germany's Can and Dutchman Georginio Wijnaldum vying for two slots alongside Coutinho. Guinean Naby Keita has also been signed for next season.
Klopp's challenge is to harness Oxlade-Chamberlain's raw pace and power and make him a more consistent performer, but former Liverpool winger John Barnes is among those calling for patience.
"We're too quick to judge. When players come in and do well we say they are fantastic. And if they aren't in the team and don't start, we say it's a disaster. It's not," Barnes told the Evening Standard.
"I think he's a fantastic player. He's probably a reflection of the team. He's come to be part of a good team and because the team has been inconsistent, maybe he's been inconsistent."
A place in the starting line-up against Slovenian side Maribor would be a welcome opportunity for Oxlade-Chamberlain to showcase his ability.