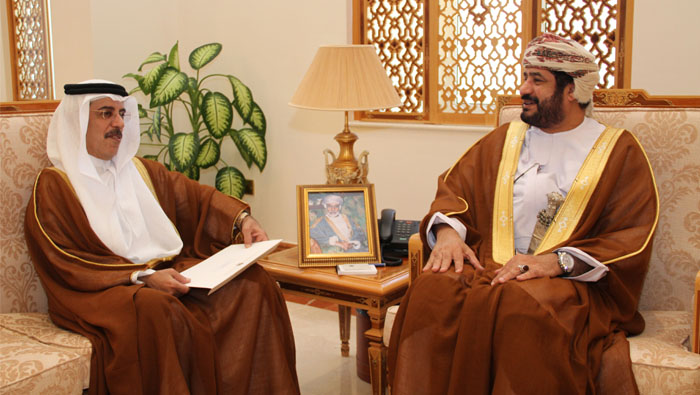 Muscat: Sheikh Khalid bin Omar Al Marhoon, Minister of Civil Service received in his office on Sunday a written message from Ohood Al Roumi, Minister of State for Happiness in the sisterly United Arab Emirates (UAE) related to inviting him to attend the 2nd edition of the Global Dialogue on Happiness (GDH) and to attend the 6th version of the World Government Summit (WGS) 2017, due to be held in Dubai during 10th till 13th February 2018.
This came when Sheikh Al Marhoon received Mohammed bin Sultan Al Suwaidi, UAE Ambassador to the Sultanate.
The meeting reviewed the strong fraternal relations binding the two brotherly countries and means of enhancing them.
The two sides discussed aspects of the constructive cooperation between the two countries on various areas.
They also reviewed a number of fields related to the administrative affair in both countries and means of promoting them.