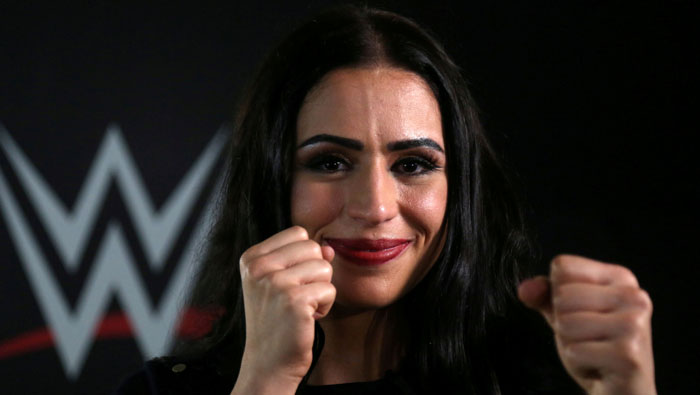 Dubai: World Wrestling Entertainment Inc. signed its first female performer from the Arab world on Sunday, smashing cultural taboos as the U.S.-based pageant seeks to piledrive its way into lucrative foreign markets. Shadia Bseiso, a Jordanian versed in jiu-jitsu, dreams of encouraging more Arab women to take up sports - and of one day maybe even crashing a metal chair over WWE mega-star John Cena.
"Female athletes are finally getting the credit they deserve. The world is more open to that, and in terms of how the region will react to it, I'm hoping its going to be very positive," said Bseiso.
Speaking to Reuters in the WWE's Dubai office, Bseiso said she made sure to tell her parents about her colourful career choice in person.
After announcing she would join the ranks of the WWE, they paused in disbelief for a moment, she said, worried for her safety in the often bruising shows.
They support her fully, she added, as she now heads to the company's Orlando, Florida, training centre for gruelling in-ring training and what WWE calls "character development" - transformation into one of their trademark big personalities.
She has a Jordan-themed persona in mind, she says, declining to elaborate.
For decades a quintessential if curious emblem of Americana, professional wrestling has now won die-hard fans in the Arab world and beyond, and features widely in apparel and toys.
WWE's reach deeper into new demographics makes plenty of business sense for the $1.5 billion Connecticut company, which has also recently signed several Indian and Chinese athletes in the hope of snaring millions of potential new devotees.
"Recruiting Shadia to join our developmental system underscores WWE's ongoing commitment to building a talent roster as diverse as our fan base," said Paul "Triple H" Levesque, WWE Executive Vice President and himself a popular wrestler.
Bseiso insists the quirky genre has room to expand if only fans could find a hero from home.
"As it is, the WWE's incredibly popular in the Middle East, but I think having athletes from the region who grew up here - it will change things. You finally have someone to root for."