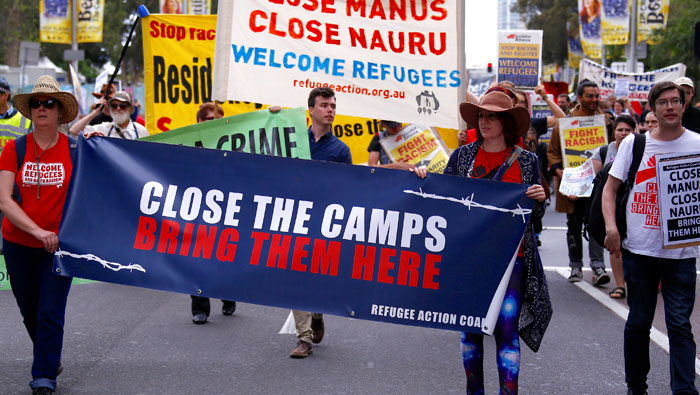 Sydney: Hundreds of protesters marched through Sydney on Sunday to call for detainees, being held in controversial centres for asylum seekers on remote Pacific islands, to be allowed to stay in Australia as a resettlement deadline approaches.
Canberra's hardline immigration policy requires asylum seekers intercepted at sea to be sent for processing to two remote Pacific locations - one on Papua New Guinea's (PNG's) Manus Island and the other on the Micronesian island nation of Nauru.
They are told they will never be settled in Australia.
The Manus centre is to be closed on October 31 when detainees who have had their refugee applications rejected will be resettled in PNG. Protesters led by socialists and refugee advocates in Sydney said the detainees should be resettled in Australia.
"Nobody is free on Manus," said Refugee Action Coalition Sydney spokesman Ian Rintoul on Sunday.
"It will be like Nauru, a prison island." Behrouz Boochani, a Kurdish journalist detained on Manus, said in a Facebook post on Friday that the detainees do not want to be resettled in PNG as they cannot work or provide for their families there and they do not feel safe.
The office of Australia's immigration minister, Peter Dutton, could not be immediately reached for a comment.
Former U.S. president Barack Obama late last year agreed to resettle up to 1,250 asylum seekers held in PNG and Nauru.
In exchange, Australia agreed to take Central American refugees.
More than 20 men left to be resettled in the United States last month, the first part of the refugee swap between the Washington and Canberra. Since 2013, 2,125 people have been sent to the detention centres, according to Australia's Department of Immigration.
As of September 30, there were still 1,111 people in regional detention, with 742 at Manus and 369 on Nauru.