Syrian town struggles to cope alone after key victory over IS 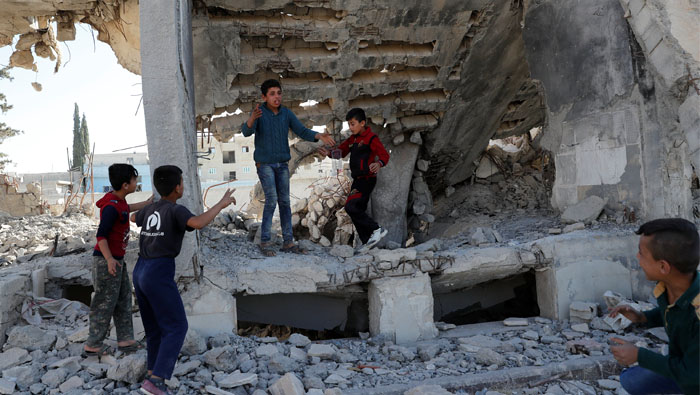 Kobani (Syria): Almost three years after Kurdish fighters defeated IS in the Syrian town of Kobani, residents still mourn the dead and feel abandoned by their foreign allies as they struggle to rebuild.
IS' defeat in predominately Kurdish Kobani in early 2015 helped turn the tide against the ultra-militant group and marked the start of a more open U.S. military relationship with the Kurdish YPG militia.
But much of the town near the border with Turkey was destroyed, leaving it facing a huge reconstruction challenge and in need of help from the allies that had supported the fight to defeat IS, including the United States.
Electricity still works only a few hours a day and regularly cuts out.
The internet, using a Turkish communications signal, is expensive and unreliable.
That, local officials say, is because aid quickly dried up, and the town's problems could soon be replicated across parts of northern Syria as IS cedes ground.
"There were never (reconstruction) projects that reflected the scale of destruction," said Khaled Barkal, a vice president in the local government.
Kurdish ties with the West are complicated by local rivalries and alliances, and by Kurdish efforts to assert autonomy in areas captured from IS. Local officials also accuse the West of trying to appease NATO ally Turkey, which sees the YPG as an extension of the PKK, a Kurdish group waging an insurgency against the Turkish government.
"Turkey doesn't want life to return here," Barkal said.
Ankara opposes the YPG role in capturing Arab-majority areas such as Raqqa, saying it threatens demographic change.
Kurdish self-assertion in Iraq and Syria has also brought charges of mistreatment of Arabs, which officials deny.
Western diplomats in the region say support for the YPG in the battle against IS cannot extend to bolstering a Kurdish-led project to cement an autonomous region.
Washington opposes plans for autonomy in northern Syria, with the international community seeking a nationwide resolution to Syria's more than six-year-old civil war.
The people of Kobani fear more upheaval lies ahead.
Syrian President Bashar Al Assad wants to win back control of all Syria, and Kurdish-led authorities are seeking to cement regional autonomy through elections, which could increase tensions.
Residents say they willingly paid the price of defeating IS and are grateful for U.S. help in the victory.
But the price was high, in terms of lives and destruction.
Shereen Hassan was among the first fighters killed defending Kobani, which was under siege from IS for four months.
Family members learned of her death when they tried to call her and IS militants answered her phone.
"They said: 'We've killed your daughter and we're posting a picture of her head on Facebook'," Hassan's brother Ednan Hassan said at their home.
The image was later posted.
Fighters are buried in a military cemetery on the edge of town where yellow YPG flags flutter above gravestones.
Portraits of dead Kurdish fighters dot the walls of the local administration and hang from rows of lamp posts.
The violence did not end completely when the battle for Kobani was won.
In June 2015, months after IS was defeated in the town, the group launched a raid that killed nearly 150 people there including 11 members of Hassan's family.
Such experiences have militarised society and the small scale of aid leaves people unwilling to rely on outside help.
"The international community left us," Hassan said. "Before the war, every home had a gun. Now it's every man."
Men in the town run a night watch, taking turns to drive around armed with Kalashnikov assault rifles.
"We protect ourselves," said locksmith Khaled Aldamr, cutting keys in his shop.
Aldamr, whose home was levelled by an air strike, said business had improved for him, but that reflected the scale of the damage that during the fighting, not an improvement in the local economy.
"When Daesh (IS) came, they kicked down doors to occupy houses, breaking the locks. People need new ones," he said, pointing at a pile of locks displayed in the window.
His services are required as new buildings spring up where homes were reduced to rubble. Many are empty so far.
The population of Kobani and nearby areas has neared its original 200,000 after people returned, Barkal said, although only 40,000 live in the town itself with fewer inhabitable spaces.
"Kobani is tired. I'm lucky. Many have no work," Aldamr said.
"We hope to rebuild better than before, which could happen if skilled Kurds abroad come back or send money. But we're trapped. Borders are closed."
Turkey closed its crossing with Kobani in 2015, and has since built a concrete wall that stretches hundreds of kilometers along the frontier. Goods come through Iraq's Kurdish region, or are smuggled from areas under Assad's control. People complain of a lack of medicine.
Despite the problems, and the possibility of more violence, the people of Kobani say they will not give up.
"We'll defend ourselves against whoever comes, to the last drop of blood," Barkal said.