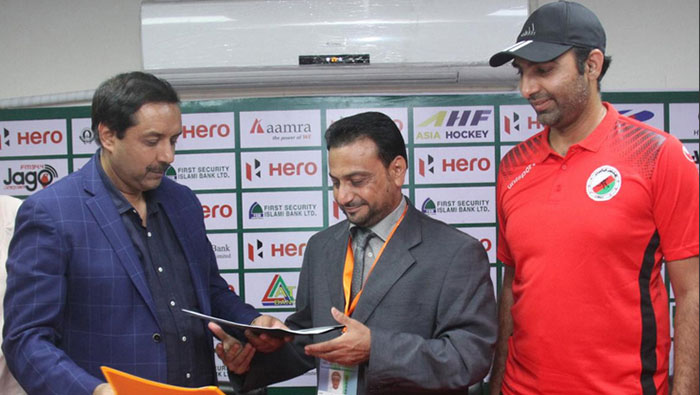 Muscat: Asian Hockey Federation (AHF) on Saturday signed a Memorandum Of Understanding (MoU) with the Oman Hockey Association (OHA) finalising the details of 2018 Asian Games Men’s Hockey Qualifier to be hosted by the Sultanate.
The MoU was signed during a ceremony organised on the sidelines of ongoing Asian Cup in Bangladeshi capital of Dhaka and in the presence of Tayyab Ikram, AHF Chief Executive, Elisabeth Fuerst, AHF Event and Sport Director, OHA General Secretary Khamis Salim Al Rahbi and OHA International Relations Manager Shakir Munir.
According to news posted on the AHF website, the Qualifying round for the 2018 Asian Games will be held between March 2 and March 10 at the Sultan Qaboos Sports Complex in Muscat.
The 2018 Asian Games will take place in Jakarta, Indonesia from August 18 to September 2 in 2018.
“The AHF’s goal is to ensure we have 12 participating nations at the Asian Games 2018 in Jakarta as there have never been more than ten teams and this time, we want to ensure the full quota is utilised in hockey. With Oman’s great history in hockey, we are confident the Oman Hockey Association will ensure the best conditions for the event,” Tayyab Ikram said after signing the MoU with Oman.
“We thank Asian Hockey Federation for giving us the responsibility of hosting the Men’s Asian Games Qualifier 2018 and their continued support in developing hockey in Oman and the rest of Asia. We are happy to host the participants aspiring to make the Asian Games qualification and look forward to hosting a successful event,” stated Khamis Salim Al Rahbi, General Secretary of Oman Hockey Association.
Shakir Munir said that the event will contribute significantly to the promotion of the sport in Oman.
“Hosting this event will not only boost the performance of Oman national team but it will also inspire young people in the country to follow and take up our sport and equip Oman to host further international hockey events,” Munir said.