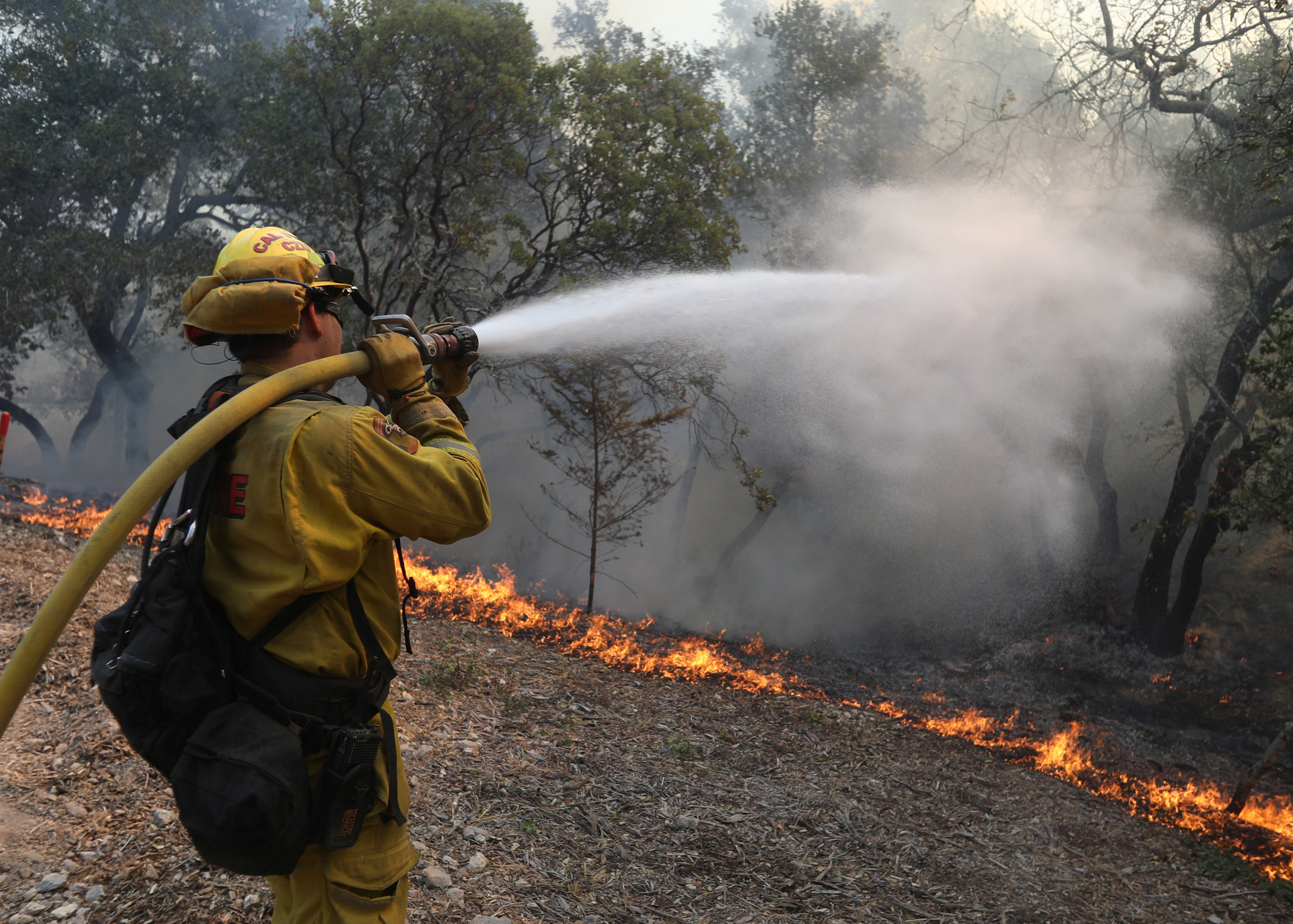 Santa Rosa: Authorities hope weaker winds will help more than 10,000 firefighters battle the deadliest blazes in California history, which have killed at least 40 people and destroyed thousands of structures in one of the state's worst natural disasters in years.
Fast-moving fires spread by shifting winds forced thousands more to evacuate their homes on Saturday as the death toll over the week rose to 40, with hundreds missing.
More than 10,000 firefighters supported by air tankers and helicopters battled 16 major wildfires in areas north of San Francisco that have consumed nearly 214,000 acres (86,000 hectares), or roughly 334 square miles (865 sq km) - an area larger than New York City.
The 40 confirmed fatalities, including 22 in Sonoma County, make it California's deadliest-ever fire event, surpassing the 29 deaths from the Griffith Park fire of 1933 in Los Angeles.
With 235 people still missing on Saturday in Sonoma County alone and rubble from thousands of incinerated dwellings yet to be searched, authorities expect the death toll to climb.
Some 100,000 people have been forced from their homes, including 3,000 on Saturday from the city of Santa Rosa, about 50 miles (80 km) north of San Francisco.
The fires have damaged or destroyed about 5,700 structures, reducing homes and businesses to ash. Some victims were asleep when flames engulfed their homes, while others had only minutes to flee.
"This is truly one of the greatest tragedies that California has ever faced. The devastation is just unbelievable. It is a horror that no one could have imagined," California Governor Jerry Brown said on a visit to a devastated city.
Janis and Roberto Lucha joined people lining up at a Federal Emergency Management Agency office in Santa Rosa, seeking help after losing their home of 27 years in the city's Coffey Park neighborhood, where most homes burned to the ground.
Molly Kurland, 63, joined a packed community meeting at the Santa Rosa High School gymnasium. "Even for people who haven’t lost their house, the uncertainty and anxiety is tremendous," she said.
But there were heroic stories as well. Teen-aged twins woke their parents on Sunday night to find fire engulfing the landscape.
The persistent alarms from Benjamin Lasker, 16, gave the family time to escape the conflagration with little more than the clothes on their backs.
Benjamin and his twin sister, Natalie, went on to awaken another eight families in their Fountain Grove neighborhood in Santa Rosa, pounding on doors, yelling "Fire!" and shining lights in windows.
"They asked permission to wake people up," Howard Lasker told Reuters, adding "I gave it to them."
There were some glimmers of hope as winds weakened and firefighters made progress with blazes such as the Cascade Fire, about 80 miles northeast of Santa Rosa, which was nearly 10,000 acres and 87 percent contained on Saturday, Cal Fire said.
Weakening winds overnight should help but high temperatures and dry conditions were expected to remain through the weekend, forecasters said.
"This is still very much in play. The danger is still very present," said U.S. Senator Kamala Harris, a Democrat from California who accompanied Brown.
At least a dozen Napa Valley and Sonoma County wineries were damaged or destroyed, throwing the state's wine industry and related tourism into disarray.
For the picturesque Napa Valley town of Calistoga, now evacuated, the winds were a double-edged sword.
The town was spared by hazardous winds when they shifted, but Mayor Chris Canning warned a resurgence could pose a new threat.
Fire officials said the Tubbs fire, between Calistoga and Santa Rosa, was about 50 per cent contained, while another in wine country, the Atlas fire, was at 45 per cent. But the Nuns fire west of Napa was only 15 per cent contained.
Others, including the Sulphur and the Redwood Valley fires, were at 70 per cent and 30 per cent containment, respectively, while the Oakmont was at only 10 per cent.
Firefighters from Oregon, Washington, Arizona, Colorado, Nevada and Utah are helping battle the blazes.
Aircraft have dropped more than 2 million gallons (7.6 million liters) of fire retardant. Cal Fire estimated the fires would be contained by October 20.
The year's wildfire season is one of the worst in history in the United States, with nearly 8.6 million acres (3.5 million hectares) burned as of October 13, according to the National Interagency Fire Center.
The worst on record for the same period in a year was 9.3 million acres in 2015. Reuters