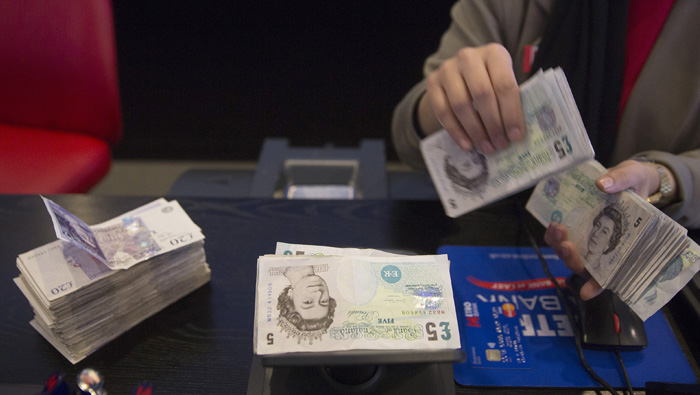 London: British government’s recent announcement that a referendum on Britain’s European Union (EU) membership will take place on June 23 was quickly followed by a sharp drop in the pound’s value.
Exchange rate volatility for the pound is bound to continue until the referendum, and to intensify at moments when a vote for ‘Brexit’ (Britain’s exit) looks more likely. The result may be a self-fulfilling prophecy, in which market and political instability drive British voters to reject the EU — an outcome that would be highly dangerous for them and their European counterparts alike.
The political implications recall the experience of the twentieth century, when the pound’s external value was a national obsession in the UK and currency crises regularly destroyed the credibility of governments and wreaked political havoc. For example, in August 1931 – the middle of the Great Depression – a financial crisis and a run on the pound forced the resignation of the Labour government, led by prime minister Ramsay MacDonald; it was replaced by a coalition government, and the Labour Party split apart.
In 1967, another Labour government, led by Harold Wilson, was damaged by a devaluation spurred by a speculative attack; Labour lost the subsequent general election. The party regained power in 1974, but within two years Britain was hit by another currency crisis – this one large enough to require support from the International Monetary Fund. Again, Labour lost the next election and the party split.
Such credibility issues were not exclusive to Labour. It was under prime minister John Major’s Conservative government that 1992’s ‘Black Wednesday’ struck, with the pound being forced out of the European Exchange Rate Mechanism, the precursor to the euro. This severely damaged the government’s credibility. Although the Conservatives did manage a narrow victory in the next election, the party’s internal fissure over European integration deepened, and by the end of the 1990s, Labour was back in power (and would remain there for more than a decade).
The economic effects of Britain’s twentieth-century currency crises were far less severe than the political repercussions. In fact, the devaluation of 1931 set the stage for an era of cheap money, which made 1930s Britain a much less dismal place than it had been under the economic orthodoxy of the gold standard in the 1920s. And the 1992 devaluation led to a new monetary-policy approach, greater macroeconomic stability, and faster economic growth.
Today, however, the British economy is facing serious risks. Exchange-rate fluctuations pose a serious short-term challenge for monetary policy, given the potential of the resulting price changes to spur inflation. That may not seem like such a bad thing, given today’s excessively low inflation (partly a result of falling oil and commodity prices); the risk, of course, is that inflation will overshoot.
More dangerous is the possibility that political uncertainty in the run-up to the referendum will discourage foreigners from buying British assets – a major problem for a country with a large current-account deficit. The prospect of losses from a declining exchange rate will be a further deterrent, potentially pushing the United Kingdom into a vicious cycle of collapsing confidence. In that case, the forced adjustment of the current account would tip the economy into recession.
As in the twentieth century, this economic breakdown is likely to destroy the credibility of prime minister David Cameron’s Conservative government. The question is whether that will turn voters against the government’s pro-EU campaign, causing them to choose Brexit, or against the damaging referendum that the government has introduced, thereby spurring a pro-EU outcome.
Two competing narratives are now being tested. Those, including Cameron, who support continued EU membership emphasise that Europe (but not the single currency) is a source of strength and stability for the UK. Meanwhile, advocates of Brexit argue that the UK is uniquely powerful, with the most dynamic capital city in the world and, as Justice Secretary Michael Gove put it, the world’s greatest concentration of ‘soft power’.
If the prospect of a referendum alone is enough to push the UK into dire economic straits, both the government that introduced that referendum and the group campaigning to exacerbate the situation are effectively discredited. The risk is that UK voters, angry about the government’s damaging actions, will succumb to the pro-Brexit camp’s false claim that leaving the EU will restore the UK’s economic dynamism.
In any case, the Conservative Party is sure to face the kind of internal conflict that destroyed the Labour party after 1931 and again after 1976. Already, Conservative MPs are deeply divided, with no prospect of reconciliation.
For the rest of Europe, the British political drama is a source of frustration and embitterment. At a time when the EU is confronting many serious challenges, the last thing it needed was protracted and awkward negotiations on the changes to the terms of UK membership that Cameron’s government demanded.
None of this bodes well for Europe’s commitment to keeping the UK in the Union. Just as some European politicians during the Greek debt crisis advocated amputating the ‘infected limb’. a growing number may lose patience as the UK’s economic situation deteriorates.
Indeed, despite the destabilizing impact of Brexit, it is possible that, in the long run, Europe would be better off without the UK. After all, Britain’s government both recognises the need for greater fiscal integration and continues to resist it. In this sense, Brexit may offer Europe the chance for a new start – one that EU leaders may consider taking. But the more likely outcome of Brexit would be the spread of financial crisis, with all of its political repercussions.