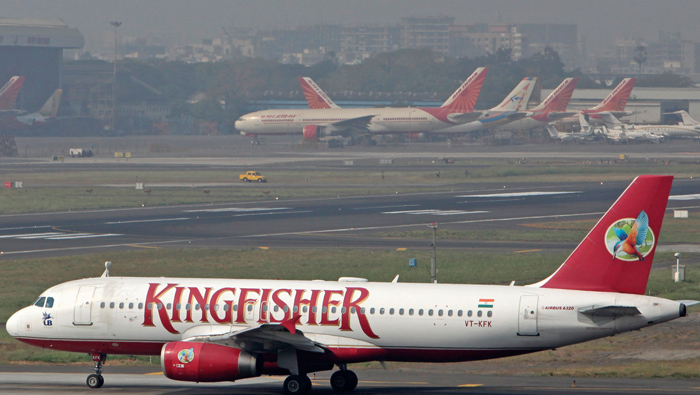 New DelhiI/Mumbai: Tycoon Vijay Mallya, under pressure from banks to repay more than $1 billion owed by his collapsed airline, on Friday refuted claims he had fled India as politicians traded recriminations over how he was able to fly to Britain unhindered.
The March 2 departure of Mallya has sparked uproar in parliament and a firestorm in domestic media that pore over the lifestyle one of India's brashest entrepreneurs. Questions centre on how Mallya was allowed to leave even after creditors of his failed Kingfisher Airlines had appealed to the Supreme Court to ensure he stayed in the country.
"I did not flee from India and neither am I an absconder," 60-year-old Mallya said in a series of posts on Twitter. Mallya said in his posts that he would comply with domestic laws.
India's financial crime-fighting agency, the Enforcement Directorate, has summoned Mallya for questioning on March 18, a senior agency official said later on Friday. A spokesman for Mallya's holding company, UB Group, declined to comment on the summons.
The self-styled ‘King of Good Times’, who co-owns a Formula 1 racing team, explained to his 5 million Twitter followers that he travels to and from India frequently, saying he was the target of ‘a raging fire’ media witch hunt.
Mallya, also a member of parliament's upper house who was last seen in the chamber on March 1, didn't disclose his current location in the social media posts. Two people familiar with his travel arrangements said Mallya flew first class to London on Jet Airways Flight 9W-122 the next day.
Indian TV reporters said they had traced Mallya to the Hertfordshire village of Tewin, north of London, where he is known to locals. The businessman's luxury home, called ‘Ladywalk’, cost £11.5 million ($16.4 million) when bought in July 2015, property records show.
Security officials told Reuters that Mallya, a fixture in India's society press pages who sports a goatee, an ear stud and a ponytail, was the subject of a ‘lookout notice’ — an official circular that triggers an alert if the target seeks to leave India but does not provide a legal basis to prevent departure.
No formal legal warrant was issued against him, even as creditors sought to step up efforts to recover the $1.4 billion owed by Kingfisher Airlines, which stopped flying in October 2012. "What can we do? It was the banks' responsibility to file a criminal case against him," said a senior home ministry official who declined to be identified because he was not authorised to discuss the case publicly. "We had no legal basis to stop him."
Modi skewered
India's attorney general, representing more than a dozen creditors, told the Supreme Court only this Wednesday that the tycoon was no longer in the country — a week after Mallya left — leaving New Delhi red-faced over his departure.
Opposition politicians have skewered Prime Minister Narendra Modi for presiding over a situation where Mallya was allowed to leave the country, mocking Modi's election promise to bring back illicit "black money" stashed abroad.
The government has hit back, saying Mallya piled up his debts under the Congress administration ousted by Modi in the 2014 election.
Commentators say the high-profile case is symptomatic of weak management at India's public sector banks — Mallya's lead creditor is State Bank of India. While a bill to modernise India's bankruptcy laws is now before parliament, the outdated legislation that is currently in force leads debt litigation to drag on for years.
Finance Minister Arun Jaitley told parliament on Thursday that the government had instructed banks to go "all out" in their efforts to recover the money owed by Kingfisher, pointing to cases of ‘wilful default bordering on fraud’.
Banks ramped up their campaign to retrieve funds after Mallya quit as chairman of spirits maker United Spirits , a unit of Diageo Plc, last month. As part of that settlement, Diageo will pay Mallya $75 million over five years.