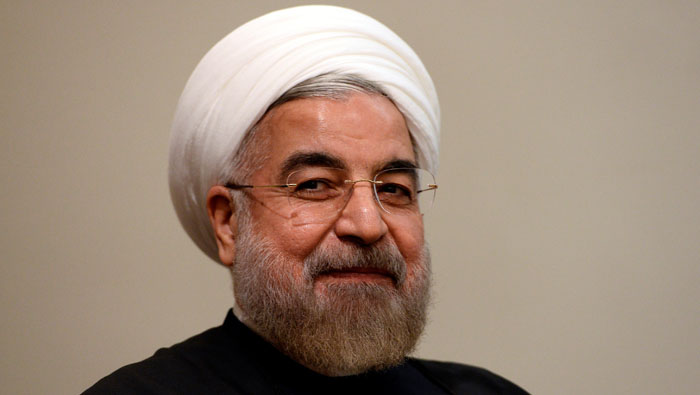 Beirut: Iran's moderate president gave a full-throated defence of his one-time rivals in the Revolutionary Guards on Wednesday, as the country's pragmatist and hardline factions rallied together in the face of threats from Donald Trump.
The U.S. president is expected to "decertify" Iran's nuclear deal with global powers this week and add its Revolutionary Guards military force to Washington's black list of terrorist groups under a strategy to increase pressure on Tehran.
The threat of U.S. action has united the two main factions of Iran's leadership, with the pragmatists led by President Hassan Rouhani who seek greater openness to the West demonstrating their support for the hardline Guards.
During a cabinet meeting shown on state television on Wednesday, Rouhani said U.S. action against the Guards would be a "mistake beyond mistakes".
"They think that the Guards are a military entity. The Revolutionary Guards are not a military entity. They're in the heart of the people. The Revolutionary Guards, in all the days of danger, have defended our national interests," he said.
"We're one society. We're Iran. There are no differences between different factions in confronting the plots of our enemies," he added.
Rouhani, the architect of Iran's 2015 deal with global powers to curb its nuclear programme in return for the lifting of international sanctions, won re-election in a landslide five months ago on a platform promising greater openness to the world and reform at home.
During an unprecedentedly bitter campaign, he repeatedly spoke out in public against the political influence of the Guards, accusing them of backing his hardline opponent to defend their economic interests.
In recent days, however, the threat of new action from Washington has prompted a public display of unity from the rival factions among Iran's rulers.
"Today, the president of America has created conditions where Iran is more united than ever. Today, those who oppose the nuclear deal and those who support it are side by side. We all have one voice," Rouhani said.
Newspapers on Tuesday ran pictures of the urbane, U.S.-educated Foreign Minister Javad Zarif laughing and hugging the commander of the guards, Major-General Mohammad Ali Jafari.
Zarif brief lawmakers on Wednesday about the expected U.S. action and about Iran's plans for a response, according to members of parliament quoted in state media.
"In the closed session Zarif emphasised that if the Americans take any steps against the nuclear deal that the Islamic Republic of Iran will give them a more crushing response," Shahbaz Hassanpour, a lawmaker representing the city of Sirjan, told the Islamic Republic News Agency (IRNA).
Lawmakers did not disclose the specific actions that Zarif had discussed as plans for Iranian retaliation.
Trump's expected move to decertify the nuclear deal would not by itself withdraw the United States from the agreement, but would pass that decision on to Congress, requiring lawmakers to decide within 60 days whether to re-impose sanctions.
The nuclear deal is supported by Washington's European allies Britain, France and Germany, as well as by Russia and China, all of which say Iran has complied so far.
Adding the Guards to the terrorism blacklist could have economic consequences, since the elite military force also has a vast business empire in Iran.
International banks are required to make sure their clients are not blacklisted.
Washington has already blacklisted other entities and individuals for supporting Guards' activities, but has not yet blacklisted the Guards themselves.
During the meeting with Zarif, parliament members expressed their support for the Guards, Hassanpour said.
Zarif also noted during the session that European countries will continue backing the nuclear deal regardless of what actions the U.S may take, Hassanpour told IRNA.