Kenya vote in balance as crisis deepens after Odinga quits 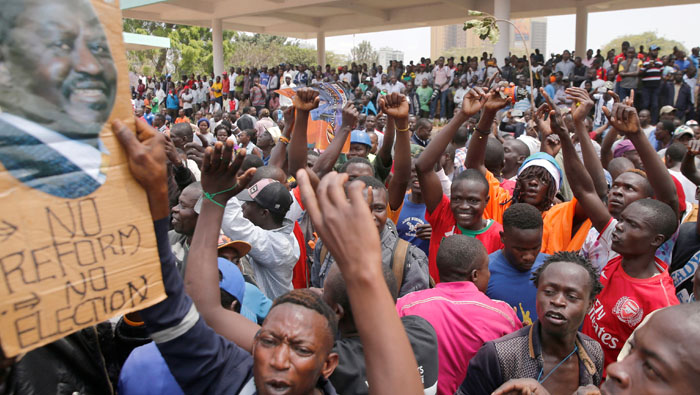 Nairobi: Kenya lurched deeper into political crisis on Wednesday as a court ruling and a parliamentary vote appeared to ease Uhuru Kenyatta's path to a second term as president, a day after his rival quit an election they were to contest.
Kenyatta and Raila Odinga were due to face off in a repeat election on October 26, after the Supreme Court annulled their August ballot -- in which the president was declared the winner -- due to irregularities.
But Odinga pulled out of the re-run on Tuesday, fuelling doubts about whether it would be contested at all. Wednesday's interventions by the judiciary and legislature added to the uncertainty.
As police used teargas to disperse opposition protesters demanding electoral reform, the High Court approved a petition by Ekuru Aukot, who polled less than 1 per cent in the August vote, to contest the second ballot.
Aukot has yet to announce if he will definitely run.
Further muddying the political waters, parliament passed an election law amendment stating that if one candidate withdrew from the re-run election, the remaining one would automatically win.
The vote was boycotted by opposition lawmakers.
That would mean Kenyatta could be declared president if he faced no challengers.
The events stoked confusion among voters and fears that politically-driven violence might escalate.
Months of political uncertainty have already blunted growth in East Africa's richest nation, a long-time ally of the West.
"There's a real atmosphere of confusion and uncertainty. There seems to be dozens of opinions of what should come next," said Murithi Mutiga, a senior Horn of Africa analyst for the global thinktank International Crisis Group.
Justifying his pullout on Tuesday, Odinga said the election would not be free and fair and renewed calls for the electoral board (IEBC), which he blamed for the procedural irregularities identified in the first ballot, to be replaced.
Opposition supporters on Wednesday renewed their protests for electoral reform.
Demonstrators lit bonfires in Kisumu, an Odinga stronghold in the country's west, while more than a thousand supporters marched through the central business district in the capital Nairobi.
Police used teargas to disperse them in both cities, witnesses said.
A repeat of the widespread ethnic clashes that killed 1,200 people following a disputed presidential poll in 2007 appears unlikely at this stage.
But at least 37 people were killed in protests immediately following the August vote, almost all of them by police, a Kenyan rights group said Monday.
"We want a reformed IEBC," said Elisha Odhiambo, an opposition legislator, referring to the electoral board, which has frequently relied on riot police dispersing protests outside its offices in recent weeks.
After the High Court ruling in his favour, Aukot told reporters that he still had concerns about the board and would issue a statement in a day or two giving clarity about his plans.
It was unclear if other candidates from the first ballot with little support would also seek to be included, but the election board said it still had time to print ballot papers.
The September 1 Supreme Court judgement that nullified Kenyatta's 1.4 million vote win also stipulated elections had to be held within 60 days.
If that schedule is not met, the constitution provides for the speaker of parliament, a member of Kenyatta's party, to take power.
With two weeks to go until the elections, it is still unclear who will stand.
"I would expect one of the parties will try to seek an authoritative announcement from the Supreme Court," International Crisis Group's Mutiga said.
Amid the political uncertainty, the government has trimmed this year's GDP growth forecast from 5.9 per cent to 5.5 per cent last month.
The country's equity markets slid further on Wednesday.
Kenya's all share index slipped 1.24 per cent while the blue chip index fell 1.14 per cent.