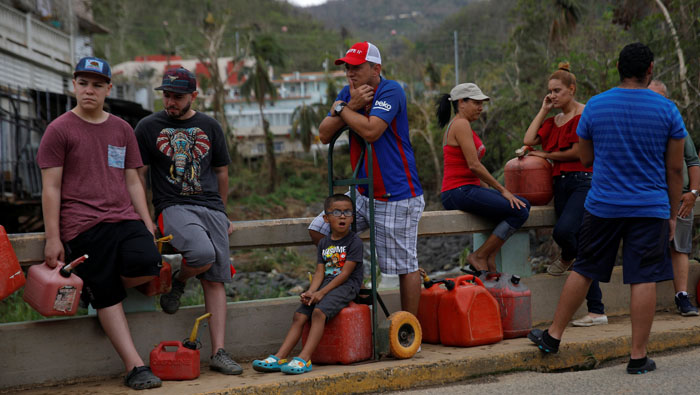 Washington: U.S. President Donald Trump asked Congress on Tuesday for a loan of $4.9 billion to help the cash-strapped Puerto Rican government pay urgent bills as the U.S. territory struggles to recover from Hurricane Maria, an administration official said.
The request came as the oversight board charged with resolving Puerto Rico’s debt crisis warned the U.S. territory was at risk of being unable to pay for essential services such as salaries for teachers, first responders and healthcare providers.
"The best estimate of the Financial Oversight and Management Board (FOMB) and government is that the commonwealth will run out of money at the end of this month," the board told U.S.
Treasury Secretary Steven Mnuchin in a letter on Tuesday evening.
Weighed down by nearly $72 billion in debt, Puerto Rico struggled with liquidity even before the most powerful hurricane in almost 90 years wiped out the island's power grid, homes and other infrastructure nearly three weeks ago.
It will take months and billions of dollars to rebuild the grid, and the impacts of the storm have cratered the economy of Puerto Rico, home to 3.4 million American citizens, which declared bankruptcy in May.
Puerto Rico Governor Ricardo Rossello had warned two weeks ago that his government was in a bind and would need lines of credit.
Trump’s loan proposal was "an important first step for the transformation" of Puerto Rico, Rossello said on social network Twitter on Tuesday.
The proposed community disaster loan would include a $150-million advance, the Trump administration official said, speaking on condition of anonymity. Further details of the loan were not immediately available.
"The $4.9-billion loan would help them with short-term liquidity problems in financing," the official said, giving examples such as payroll and pensions.
"The money cannot be used for debt service."
On Saturday, Rossello wrote to Trump pleading for a "down payment on hurricane recovery efforts" in the form of a broad assistance package of at least $4.6 billion, as the island assesses the damage.
"Absent extraordinary measures to address the halt in economic activity in Puerto Rico, the humanitarian crisis will deepen," Rossello said in the letter, warning of a possible exodus to the mainland United States.
Moody's last week estimated the hurricane's cost to Puerto Rico, including lost output, ranges from $45 billion to $95 billion.
The Trump administration and Congress have focused funding efforts on immediate disaster relief.
This week, the U.S. House of Representatives will consider a request for a further $13 billion in disaster relief funds for hurricane victims in Puerto Rico, Texas and Florida.
The White House has also asked federal agencies to estimate by October 25 the funds needed for longer-term rebuilding.