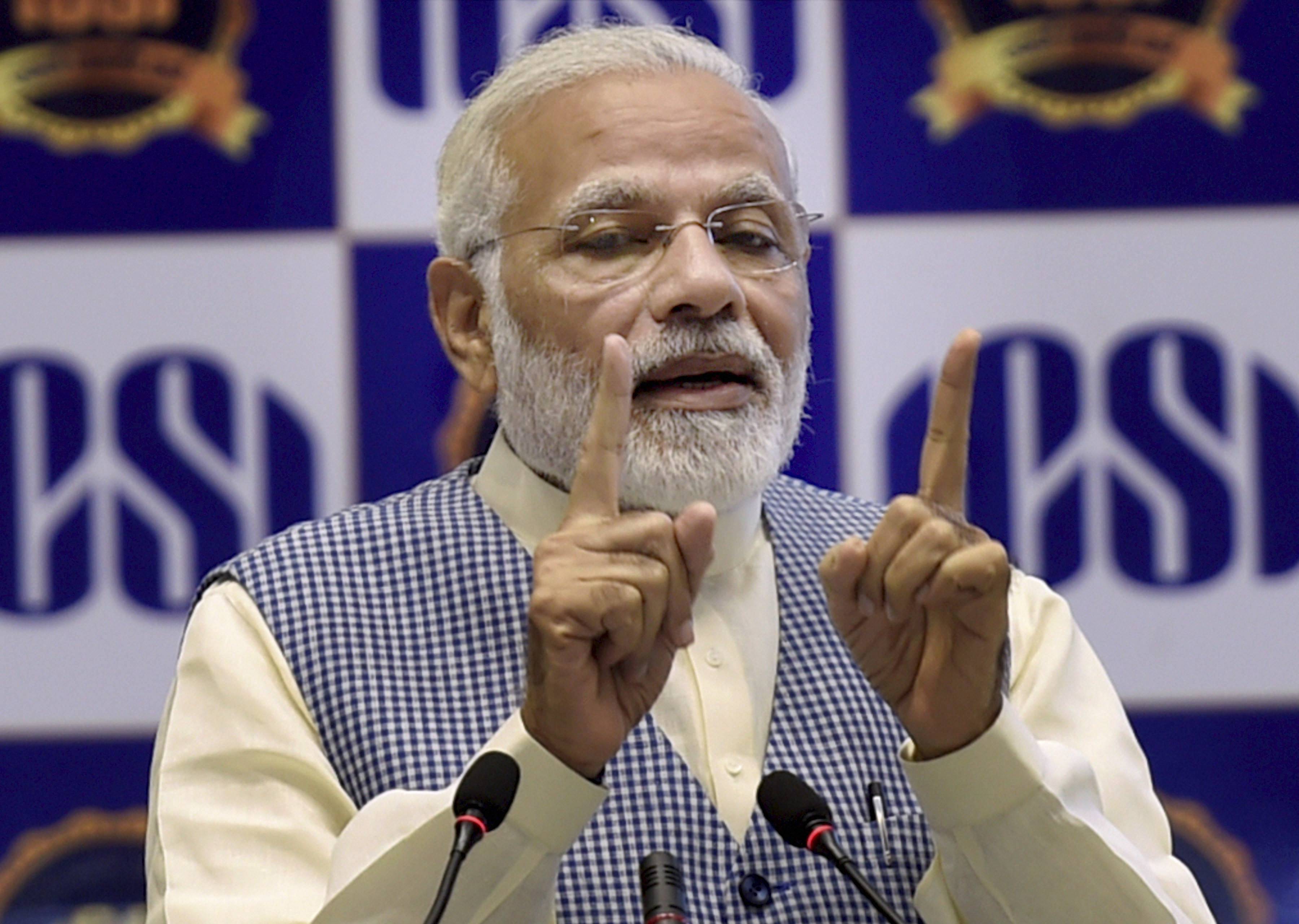 New Delhi: Lashing out at critics of his economic policies, Prime Minister Narendra Modi on Wednesday said the Indian economy was on firm footing and that he will never jeopardise the country's future for immediate gains.
In an over hour long speech, punctuated with sharp comments and comparisons with track record of previous UPA regime, Modi told a gathering of Company Secretaries that his government will continue reforms and will not hesitate to take decisions to reverse the GDP slowdown witnessed in the last two quarters.
In the same vein, he said his government will graciously accept criticism on economic front and will make amends wherever necessary.
Inaugurating the Golden Jubilee Year Celebrations of the Institute of Company Secretaries of India (ICSI), Modi said he has asked the GST Council to identify bottlenecks and technological hurdles faced by businesses especially small and medium enterprises.
"I will not jeopardise the future of the country for my present gains," he said, adding the government would focus on structural reforms rather than giving doles to win praises.
Modi said his critics were seeing slowdown in the last two quarters but were ignoring the fact that the BJP government had brought down inflation from 10 per cent in the United Progressive Alliance regime to 2.5 per cent, shrunk Current Account Deficit to near 1 per cent from 4 per cent and brought down fiscal deficit to 3.5 per cent from 4.5 per cent.
GDP growth was 5.7 per cent or less than that on eight occasions during previous UPA government, he said, lamenting how pessimists were describing the April-June growth of 5.7 per cent as doomsday.
Modi made comments days after senior BJP leader Yashwant Sinha in an article headlined "I need to speak up now", described the economy as a "mess" that will not resuscitate before the next general elections.
"The government is committed to reverse this trend...we are capable of that and ready to take decisions," Modi said, adding the decisions taken by the government will take India to a new growth trajectory.
Noting that his government has been criticised on economic front, Modi said: "We are a sensitive government. We accept the strongest criticism and we have considered them with humility ... 125 crore people have expectation of high growth".
Quoting the Reserve Bank of India, the prime minister said the growth is expected to improve to 7.7 per cent in the last quarter of the fiscal. According the RBI, the economic growth, which had slipped to 5.7 in the first quarter, is likely to improve to 6.4 per cent in second, 7.1 per cent in third and 7.7 per cent in the last quarter.
Observing that the number of EPFO subscribers has gone up from 32.6 million in 2014-end to 48.0 million, the prime minister said this cannot happen without increase in job creation.
Modi further said the NDA government in the last three years has undertaken 87 reforms in 21 sectors and the country has come out of "policy paralysis" to become a nation of "policy maker and policy implementor".
The prime minister said there was a time when India was part of 'fragile-5' and the BJP government pulled it out to make it the fastest growing economy for most part of its three-year rule.
The government, he said, was aware that the growth has slowed and is taking steps to improve it. The government, he said, is ready to make amends to help small traders. Modi said registration of 210,000 out of 300,000 suspected shell companies identified post note ban have been cancelled in a crack down on the black money.
Modi assured the traders that the government will not re-open their records if they join mainstream of the economy. "In the changing economic scenario, honesty will command a premium and the government will protect the interest of honest persons," he said, and called upon the company secretaries to encourage their clients to honestly pay taxes.
The prime minister also said his government had the courage to take bold decision like demonetisation and implementation of Goods and Services Tax(GST), which the previous government lagged.